This is the ninth book in the series, so I’m almost half-way with my reviews. Just as a random point – I always confuse this title with Five Go Adventuring Again. It doesn’t hep that they are two of the vaguer titles and have the adventure/adventuring similarity, but I know they’re not that similar. I just have a bit of a mental block about them.

If I’m trying to remember plots I have to think for a moment about Fall Into Adventure, Plenty of Fun and Wonderful Time (but I know what Adventuring Again and Get Into Trouble are about instantly… the mind is a strange thing.)

Anyway, I am writing about Five Fall Into Adventure today, so I do know the plot. If I happen to call it by the wrong name, forgive me?

A story in three parts

Continuing what I’ve started by dividing each book into chunks:

You could combine parts 3 and 4 for a very long search and rescue mission, but a lot happens and all the drama at the end is quite different from what comes before.

A series of somewhat unfortunate events

Dick foolishly remarks that two weeks isn’t long enough to find an adventure when they arrive at Kirrin. But the very next day a chain of events begins which will lead to a pretty big adventure.

First they get rid of Uncle Quentin and Aunt Fanny to Spain, amidst phone calls from the press. Quentin is not long back from America where he has attended a conference and attracted quite a lot of attention.

Later they see a man and boy on the beach, and the boy is bold enough to sit in George’s sand hole. That turns into an argument which Dick breaks up, he won’t let George fight a boy. Only, once the boy has punched Dick and Dick has punched him back, it turns out that the boy is actually a girl.

And so we meet Jo, who I will dedicate a section to later, and the Five are already on the slippery slope to adventure though they don’t know it yet.

That night Anne sees a face at the bedroom window in the middle of the night – and it wasn’t a dream because the ivy is damaged. The boys are a bit worried but downplay it for Anne’s sake. They have no leads so there’s not much they can do anyway.

They have another meeting with Jo the next day on the beach – and a damson stone spitting competition, of course – and she makes friends with Timmy, much to George’s horror.

Uncle Quentin’s study is burgled that night, and Timmy didn’t react as he had been doped with something while on his evening walk. 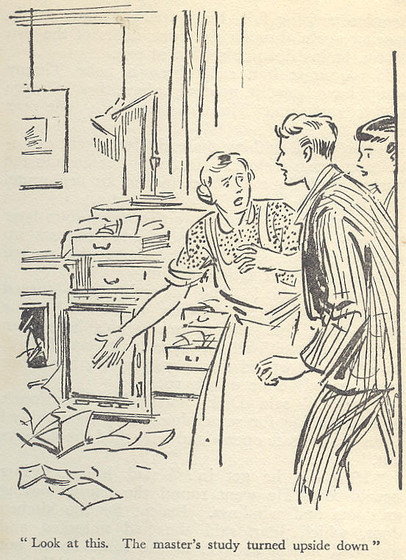 The Five manage to deal with all this quite well – even becoming bored of the police as they ask their endless questions and eat their way through all of Joan’s baking.

As you can see there has been a steady series of small events – seemingly unrelated – all leading to the real disaster striking. George and Timmy go missing – though it takes a while for anyone to realise as they think they’ve just gone off fishing early in the morning. By late afternoon they are quite concerned and then a ransom note arrives!

The note says that the kidnappers want to swap George and Timmy for another of Uncle Quentin’s notebooks so it’s up to Julian, Dick, Anne and Joan to come up with a plan to foil the kidnappers and rescue George and Timmy. The telephone wires have been cut and someone is watching to make sure none of them leave to get help. In a clever idea where they swap Dick for Sid the paper-boy Dick is able to follow the person who comes to collect the notebook – and lo and behold, it’s Jo!

What are the three remaining Famous Fivers to do? They have one of the gang in custody, but Jo’s just a messenger, or so she says. She admits to having let the burglars in, doped Timmy and shut the front door to make it seem like George had returned. So she’s in deep but she wants to help them, mostly because she’s taken such a liking to Dick.

Nobody is sure if they can trust her or not, but she’s got inside information and they decide it’s worth a try. She leads them towards Ravens Wood where she thinks they’ll have taken George, but on the way she is dragged off by a friend of her father’s.

The exciting finale and my usual thoughts and nitpicks will come next.

This entry was posted in Book reviews and tagged Five Fall Into Adventure, Jo, The Famous Five. Bookmark the permalink.

9 Responses to Five Fall Into Adventure