The Five as you’ve never seen them before, part 2

Cunningham and Petrov, the Mystery of the Missing Aeroplane

Amelia Jane slept for an hour- and then she began having horrid dreams about falling into a river and getting cold and wet. She woke up with a jump – and oh, my goodness, whatever had happened? She was clasping a few wet clothes tightly to her – and she was soaked through and dropping wet. The snow-doll had disappeared.

I think we can guess what happened to the snow-doll in Amelia-Jane and the Snow-Doll from Amelia Jane Again! 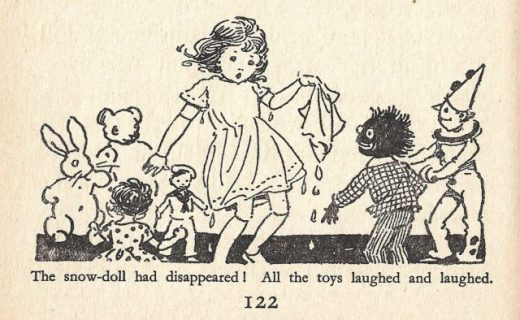 Not an original Blyton location, but this week we will have St Andrew’s Castle, first built in the 1200s. It’s now a ruin, but it boasts the most complete example of a mine and counter-mine in all of Europe, and best of all, you can go down and explore it. With the sea on two sides it’s a very Bytonian setting, and I’ve just used it as the location of my new fanfic story, which I need to come up with a title for.

A close up on the castle’s beach