Five Go Down to the Sea part 2

I’ve reviewed the main story here, so now it’s time for everyone’s favourite part two, where I viciously dissect the book and point out all the plot holes and mistakes.

First up, a few points about Eileen Soper’s illustrations. We’re on book number 12 now, and the children have gradually been growing older.

All of a sudden, though, Dick seems very bulky and strong-jawed (the latter being used to describe Julian, usually). In the text Dick says he’s all skin and bone which I’m sure is an exaggeration, but there’s little to choose between he and Julian in size and age. Just check out the cheekbones on him below: 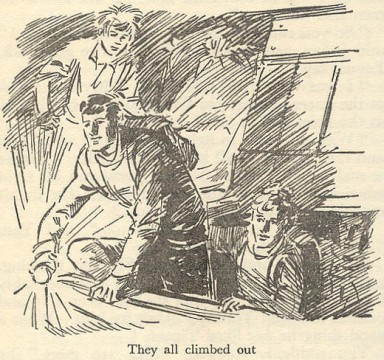 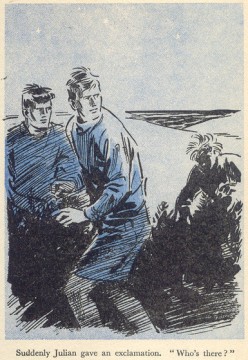 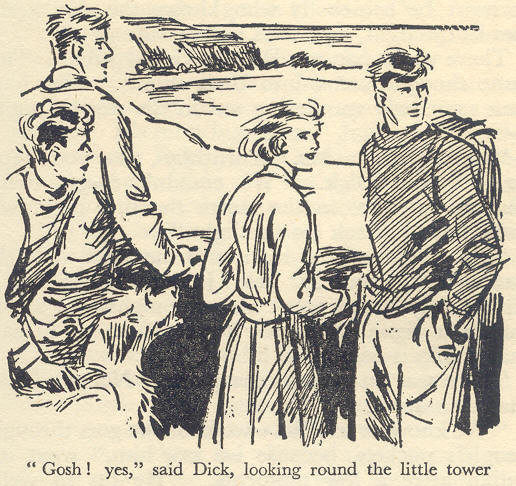 It’s a far cry from the 11 year old boy in Five on a Treasure Island,

It’s even a change from Five Fall Into Adventure (3 books back) or Five on a Hike Together (2 books back.) 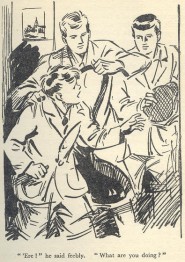 Also, Yan is described twice as wearing pants. Soper depicts those as loose trousers, though boys his age would normally wear shorts.

George as a boy

Anne offers to help Mrs Penruthlan  (Mrs P from now on) shell peas before they go to church, and Mrs P accepts but says the boys needn’t help. George immediately goes on the defensive I like that! How unfair! Why shouldn’t they, just because they’re boys?” I think she has a point!

Dick takes the sting out by saying he and Julian will help, of course, as they like podding peas. I imagine he wouldn’t say the same if it was a more arduous or feminine task, though! And it doesn’t tackle the fact that Mrs P was the one to say the boys didn’t have to help, but it makes George simmer down anyway

Interestingly both girls were hats to church and they both add a sprig of honeysuckle, which sounds very un-George like to me. She looks more masculine than Anne in the illustration which appeared in the magazine version, though.

Yan’s Old Grandad refers to George as Little Master when they go to visit, and I think that’s the only time George is mistaken for a boy. The Penruthlans know she’s a girl certainly.

Signs of the times

I always like looking out for little things that really place the books back in time.

In this book it mostly has to do with the trains. When they go to catch the train from Kirrin the porter labels their luggage and says the train will wait until he’s done – you’d never see that happen these days, and yet the trains run later and later!

Also, their other luggage has been sent on already. I’ve seen this quite a few times in Blyton books. I understand that a child or children, especially when cycling, doesn’t want to be encumbered with cases or trunks. However, I can’t work out exactly how it all works!

I assume an adult drops heavy trunks etc at the station and a porter puts them on a train with a note saying which station they are for. There was guard for the luggage van so he would be organised and know which luggage was to be passed to a porter at the other end… and then? Someone has to deliver or collect them? In this case someone from Tremannon Farm would come with a pony trap or old Land Rover and pick up the cases, then wait until the next train arrived for the Five to get off and then cycle over?

Why couldn’t the Five have been dropped at the station with their luggage instead of sending it on an earlier train? I appreciate that four bikes are cumbersome, but they could have cycled behind Fanny’s pony trap, and at the other end they could have been greeted by the luggage collector and given directions etc.

Also, at their stop the guard finds them and reminds them they want to get out as they hadn’t realised they had reached their destination. Something else you’d be unlikely to see today unless you have specifically asked for a reminder, and even then you’d probably be out of luck.

People criticise her writing all the time and yet there are absolute gems to be found, on top of all the descriptions of scenery and her fast-paced adventures.

The old shepherd was sitting outside his hut, smoking a clay pipe. He wasn’t very big, and he seemed shrivelled up, like an apple stored too long. But there was still a sweetness in him, and the children liked him at once – he had Yan’s sudden smile, that lighted up eyes that were still as blue as the summer sky above them.

His face had a thousand wrinkles that creased and ran into one another when he smiled. His shaggy eyebrows, curly beard and hair were all grey – as grey as the woolly coats of the sheep he had lived with all his life.

The bit about the apple I thought was particularly good – that’s the bit I jotted down as I read but the whole description is pretty good too!

She also refers to hungry rocks when talking about ships being wrecked, how many times have we heard rocks being likened to jagged teeth?

The Wreckers’ story isn’t as strong as the one in Five Go to Demon’s Rocks, but it was clearly the precursor which she reworked for the later story. In Demon’s Rocks the tale is more lively the wreckers have names and personalities and it’s helped by their descendants still being present. Saying that, Old Grandad’s is a spooky tale especially with the reveal that the light still flashes to this day!

I think she also learned from her baddies here, going forward to Demon’s Rocks, as none of them are fleshed out. We know a little about the Guv’nor but barely anything, and nothing about anyone else. Who was the man on the boat, and the two men who go out to it? Who locked them in the room? I guess Blyton had to be vague on their identities as we had to believe Mr P was one of them but it’s a shame they were all just shadowy figures in the dark.

There isn’t an awful amount of food in this book. But there is an enormous high tea when they arrive at Tremannon;

A huge ham awaited gleaming as pink as Timmy’s tongue; a salad fit for a king. In fact as Dick said, fit for several kings, it was so enormous. It had everything that anyone could possibly want.

There was an enormous tureen of new potatoes, all gleaming with melted butter, scattered with parsley. There was a big bottle of home-made salad cream.

“Look at that cream cheese, too… And that fruit cake. And are those drop-scones or what? Are we supposed to have something of everything, Mrs Penruthlan?”

“Oh yes. And there’s a cherry tart made with our own cherries, and our own cream with it.”

I saw someone say recently that they weren’t impressed when a high tea was dominated by a salad, but I think that one sounds pretty good! I love hard boiled eggs and salad cream (or mayo, though).

There are also lashings of peas and new potatoes at a lunch later on, along with cold boiled beef and carrots, with a dumpling each, followed by a truly magnificent fruit salad and cream. They still manage a large afternoon tea picnic and a high-tea the same day, but without any descriptions.

Turns out I wrote so much about random things from this book that I’ll have to put the nitpicks in a separate post!

Next post: Five Go Down to the Sea part 3

This entry was posted in Book reviews and tagged Five Go Down to the Sea, The Famous Five. Bookmark the permalink.

9 Responses to Five Go Down to the Sea part 2