Locked down library displays weeks 14 and 15

Here we are at the end of my book displays. I still have no information on when I may return to work but I have more or less run out of ideas, and 100 seems like a nice round number to end on.

Week 14 is the last full week, though really at this point it was no longer 7 displays a week as I had to wait to retrieve/borrow some books from my parents’ house and there was some procrastination involved too.

Exactly what the title says, the Naughtiest Girl books. Including those by other authors along with the sign Harry sticks on Elizabeth’s back in the first book.

I’ve used most of Blyton’s best-known stuff already, The Famous Five had their own display as did the Five-Find Outers and the Naughtiest Girl above, and I’ve used lots of other titles in other displays. Here are some I haven’t used before, ones I think less people will have heard of.

From the back left:

Some close ups below: 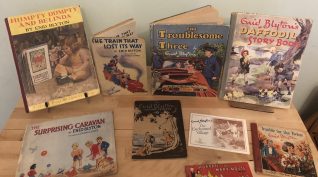 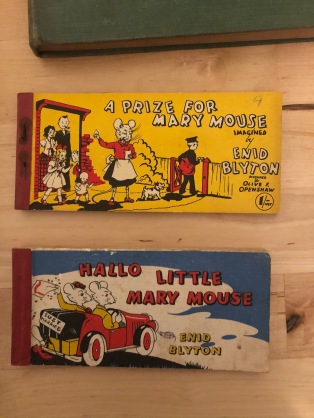 There’s been a murder!

That title should be read with the distinct Glaswegian accent of Taggart, aka Thurr’s been a murrderr! (ably done by David Tennant here).

That’s tomato sauce mixed with Worcestershire sauce on the knife, by the way. Nobody was actually murdered in the making of this display (I don’t advise using a real kitchen knife in a library unless you really do want a murder).

Make, Do and Mend

Most of the books are my mums, but all the crafting supplies are mine. The title is from the government backed scheme to have people repair and re-purpose clothing during World War II as clothing was rationed. I’ve added the comma after make as crafting can be about making, doing and mending, rather than making do.

I really loved doing this one and thought it came out great, but you can’t make out all the detail from the photo so there are some close ups below. 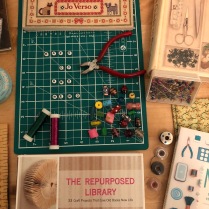 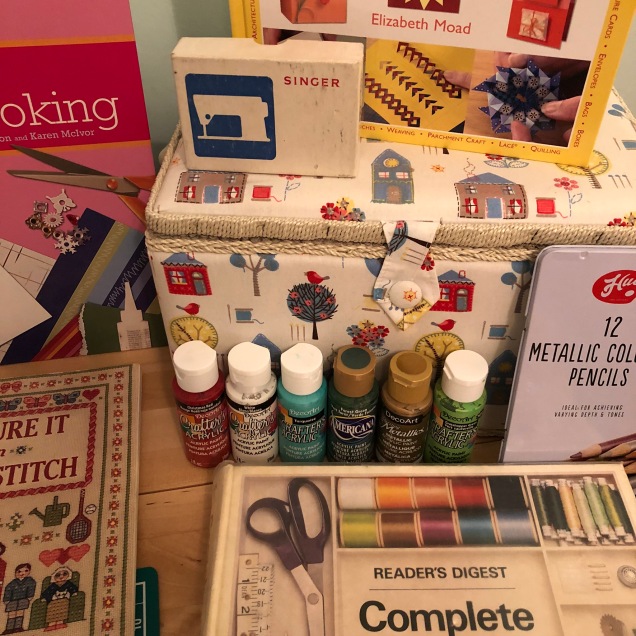 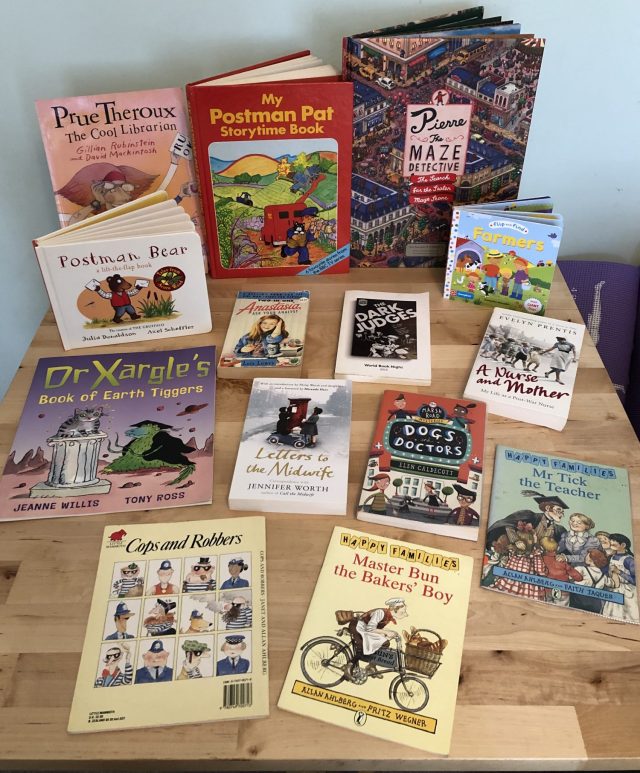 Just in case anyone was in need of inspiration.

Lots of Ladybird Classics which were beloved favourites in our house – I started to write which ones I especially liked but it was just about all of them! 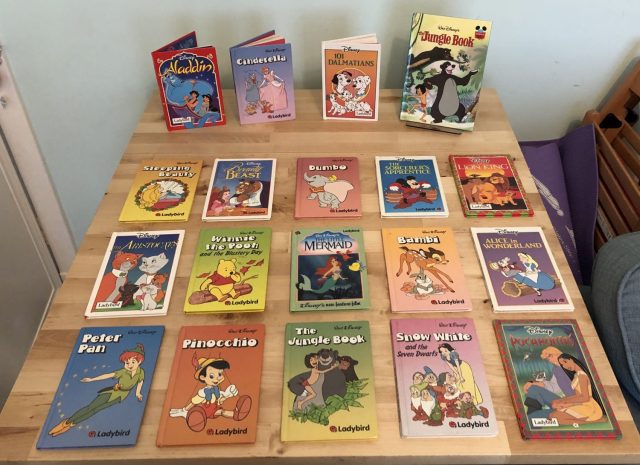 Alongside our Ladybirds we also had a lot of these Disney tales – some of which are retellings of books in the previous photo. (We didn’t have two Jungle Books, the larger one is one Brodie has acquired somewhere). 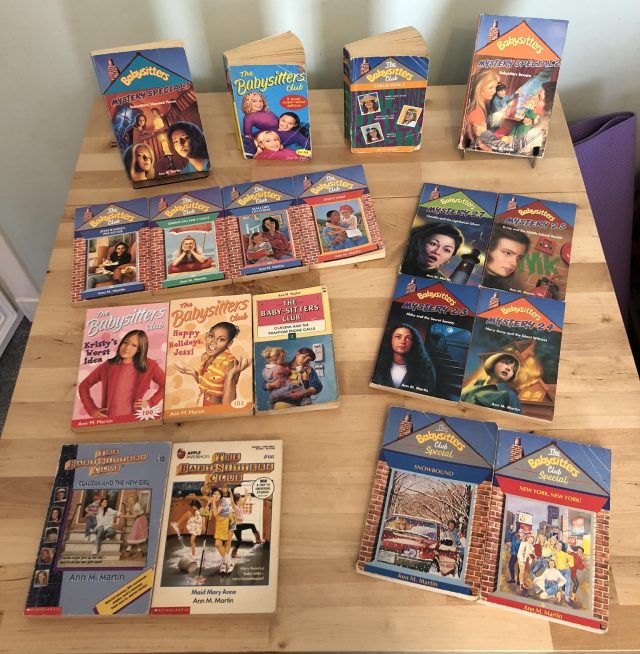 A selection of the different covers amongst the 130 or so books my sister and I collected between us. This is one of the few things we both enjoyed reading and we got together this week to watch the new Netflix series which was surprisingly good considering it had been modernised.

Bottom left are two of the original American-style covers, those on the bottom right have the ‘brick window’ style of the UK editions, and that’s what most of our collection looked like except the mysteries which are on the middle right, but they kept the roof motif.

I think I got into these by reading the mysteries – which are sort of Nancy Drew type stories – and at first found the regular stories dull in comparison. Then somehow I started enjoying the regular stories and I’m currently trying to read all the ones I missed. 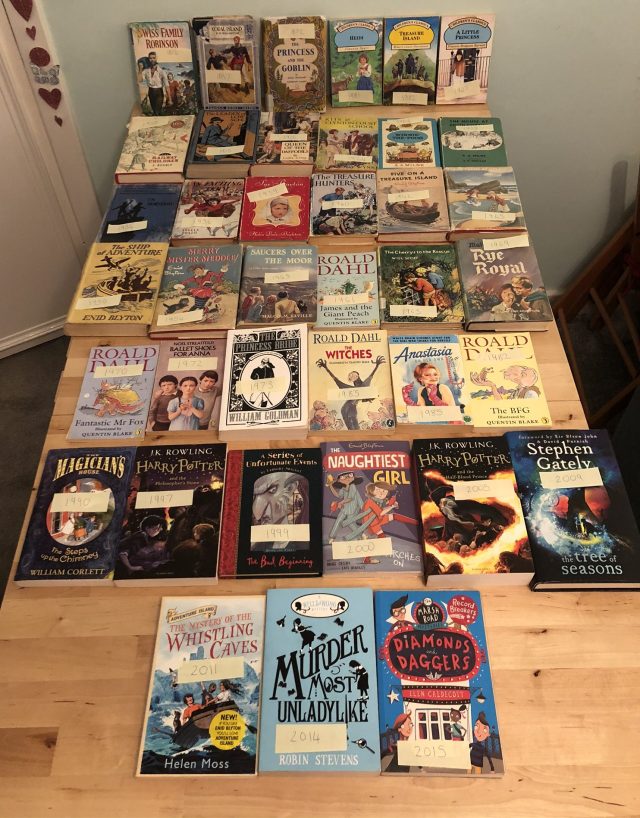 I nearly had to do this one on the floor as it was so big, but as I had done all the rest on the dining table I dragged it out, put up both the leaves and managed to squeeze all the books on.

I was also very late in doing this, well past what should have been day 100. Mostly because I was procrastinating, knowing it would be a lot of work. Also because I hadn’t decided on my criteria. I had originally had the notion that I would use the publishing dates of the editions I had, but that turned out to be both onerous and limiting. So I went with original publishing date – none of the books on the table are actually 200 years old!

Anyway, the books are:

And yes, now I’ve typed it out I realise that I put The BFG in the wrong place. 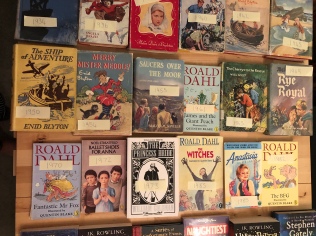 I’m  a bit sad that my displays are done, but also quite glad as it was hard thinking up so many ideas! (Plus my shelves were always a mess with things being hauled on and off all the time).

1 Response to Locked down library displays weeks 14 and 15