Five Have a Wonderful Time

Well, this is embarrassing. My last review in the Famous Five series was Five Go Down to the Sea. That’s book #12. Five Have a Wonderful Time is book #11.

I would like to pass this off as me being rebellious and reviewing them in a non-standard order or being clever and reviewing them in an order that benefits some sort of astute insights. But I can’t. The truth is I accidentally missed out Five Have a Wonderful Time, which I can’t understand seeing as they are shelved in series order.

But anyway, I am here, writing now to fix my egregious error.

Five Have a Wonderful Time ranks 13th in my Famous Five rankings, so it’s just below the middle. I think in my rankings I said I found the number of adults involved irritating, and the vague title doesn’t help.

A story in how many parts?

Part one: The boys and Anne are camping and George joins them.
Part two: The fair-folk arrive and stand off against the Five before Jo arrives.
Part three: The Five plus Jo start investigating the face at the window in the castle.

We start this book with just Julian, Dick and Anne on holiday. It’s rare for the Five to be apart like that especially at the beginning of a book, so there has to be a good reason. George has been bathing in April and staying in too long according to her mother, and has caught a cold which has precluded her from going caravanning.

So at first the other three are having a good time on holiday but missing George and Timmy, while George is stropping around in irritation that she’s stuck at Kirrin instead of with her cousins.

Their disparate worlds briefly collide when Julian calls to ask if Uncle Quentin is all right as two scientists have gone missing. His concerns are dismissed, as of course Quentin is absolutely fine but this is a nice early hint that adventure is on the way.

Julian only speaks to Aunt Fanny on the phone but George and Timmy are properly reunited with the others by page 21 (and the story starts on page 9!). 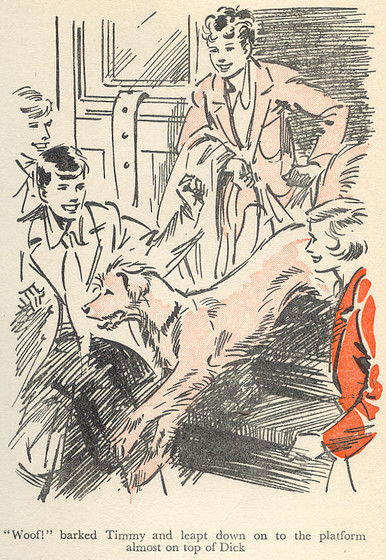 This section is surprisingly tense and exciting. There are several books with long, slow, meandering beginnings, and others where there are odd happenings early-ish, but there are two story lines running here one of which gets very tense.

Firstly we have more details about the missing scientists who appear to have walked out and [taken] important papers with them. The word defecting isn’t used but there’s talk of them being traitors and selling secrets. Terry-Kane bought ticket to Paris, so he looks guilty at least. (I can never remember which one’s which between Terry-Kane and Pottersham, but I remember one has huge eyebrows). Later Pottersham is said to be in the pay of a country unfriendly to us which is sinister if a bit vague. Blyton wouldn’t have wanted to offend any readers by mentioning their country, of course. There have been many reported sightings of the pair abroad – but of course if you’ve read the book you know they’re false sightings as they’re rather a lot closer than that.

And the other story line now – the field their caravans are in suddenly starts filling with the caravans of fair-folk. There are Mr Slither and his pythons, Bufflo and his whip (and Skippy his wife), Mr India-Rubber who can wriggle about bonelessly, Alfredo the fierce-looking fire eater and his tiny wife Anita, and a man who can untie himself from any ropes.

The Five like circus and fair-folk but immediately get off on the wrong foot with this lot when Timmy barks at Mr Slither’s snakes. They didn’t have a chance, really, anyway, as the fair-folk have had a bad time recently with a cage of canaries being set free and the police being called on them so they are adamant that they won’t have children near them. Mr India-Rubber says there’s Us-folk and you-folk, and they don’t mix. Bufflo warns them off, the rope man warns them off, Mr India-Rubber warns them and does a strangle wriggle across the ground that knocks Julian and Dick off their feet. 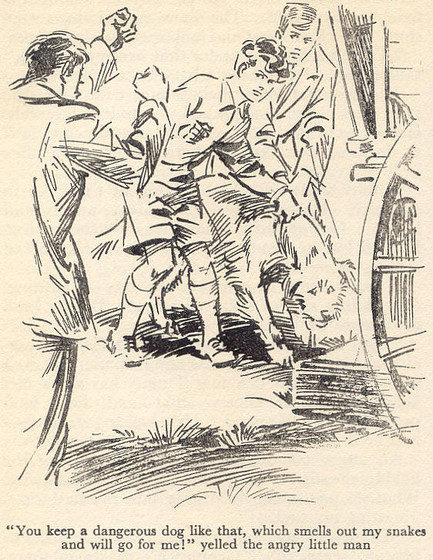 So suddenly their idyllic camping ground has become an unpleasant place to be. They can’t move on as unlike in Five Go Off in a Caravan they have no horses. It’s quite horrible, actually, seeing the Five being bullied by adults and nobody there to help them out. Julian does some standing up to them but he’s not as strong as against, say, Mr Stick or Tiger Dan. Perhaps because he’s stuck in such close quarters with several enemies.

It all comes to a head when the Five’s caravans go missing. They aren’t far away – just in the next field – but the Farmer is furious and they’re in rather a pickle.

The fair-folk won’t bring the caravans back and it reaches a stand off with them vs Julian and Dick (fierce as George is even she doesn’t demand to go along) until Jo shows up.

I actually find this a really disappointing resolution to this problem. Jo runs up and declares how wonderful the Five are, and as Alfredo is her uncle they all listen to her and change their tune.

For me it’s such a pity that Julian, Dick and Timmy don’t hold their own against the fair-folk when they’ve done so against much tougher enemies including armed ones. I would have liked it if they had managed to resolve the problems themselves – perhaps by saving a caravan from burning, rescuing one of the fair animals from drowning or something.

It’s also disappointing that the fair-folk don’t really learn a lesson here. They accept the Five as Jo says they are decent but there’s no comeuppance for their bullying or unfair judgement of the Five. (You’d think as fair-folk were so often unfairly judged as thieves and trouble makers etc that they’d be a bit less quick to judgement themselves).

Julian is relieved but still has a mind to push off home – and I’d be the same. I know it’s cutting your nose to spite your face but why would you want to be around people who can be so nasty for no reason? He says it’s a matter of pride and I really know where he’s coming from with that. It’s a bit Elizabeth Allen-ish, actually, when she thinks it’s feeble to change her mind to stay at Whyteleaf when she said she’d go.

But of course they stay – the story would end right in the middle of the book otherwise! What changes Julian’s mind is he and Dick spotting a face with pronounced eyebrows at the window in the castle’s tower. One of the missing scientists had very strong eyebrows, and as the face was seen after the castle closed to visitors for the day, it’s something they have to look into.

I will be back with the rest of the story plus my lengthy list of nitpicks in a week or two.

This entry was posted in Book reviews and tagged Five Have a Wonderful Time, Jo, The Famous Five. Bookmark the permalink.

2 Responses to Five Have a Wonderful Time