Dog Loves Books is a CBeebies programme. Based on a book by Louise Yates it features Dog who owns a bookshop and his friend Pug, who go on adventures in books.

I was half-asleep on the sofa one morning and Brodie was watching CBeebies, and I half-heard what I thought was the name Enid Blyton along with adventure and stories. Obviously I shook myself awake and hit the record button. 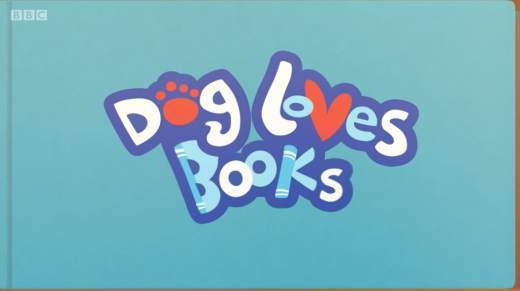 Turns out the name I heard was Enid Brighton but given the content of the episode I suspect this is an homage, or a way of getting around copyright issues!

If Dog’s voice sounds familiar to you it’s because it’s John Thompson of Cold Feet etc.

Pug wants to write exciting stories, and our two friends meet Enid Brighton. She has a very vivid imagination and they go on an adventure to solve all of her mysteries.

It is currently available to watch on BBC iPlayer here (but only until October 28, it may come back on if/when the episode is repeated) and YouTube here.

The episode follows what I assume is the premise of all the episodes, whereby the dogs run into a problem and look for help in one of Dog’s books. And I mean literally inside as they enter into the world of the book.

This time the problem is Pug is trying to write his own book (with the help of typing mice). It is supposed to be an action and adventure tale but when Dog reads it he discovers it is a list of all the things Pug likes to eat.

Dog suggests they try to find a book which will teach them how to write an adventure book, which leads them to none other than Enid Brighton. 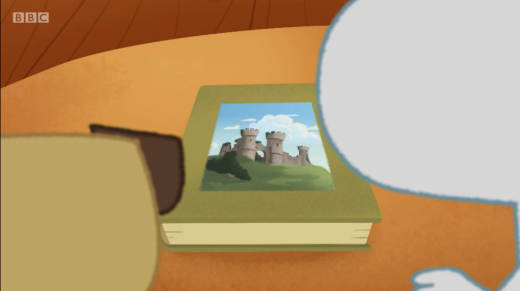 Not any of the Enid Brighton/Blyton biographies I know of

Inside the book they meet Enid Brighton who invites them to join her gang of mystery solvers, rescue her uncle and capture some spies. In the end, though, she admits that these were all figments of her imagination and Dog encourages her to write her stories down.

When does Enid Brighton = Enid Blyton?

Here are the clues:

Dog says that the book he has picked out is about Enid Brighton who wrote dozens of thrilling stories. From the time she was a young girl Enid Brighton had a very vivid imagination.

The inside of the book features a ruined castle and a picnic. The picnic is made up of sponge cakes, jam sandwiches and lashings of fizzy pop.

Enid Brighton warns them that Spies from the old ruined castle are everywhere.

The gang they form is called The Thrilling Three.

In a somewhat Inception-like moment at the end, after telling Enid to write her stories, Dog says and Enid did write down her stories, dozens of them and we still thrill to her adventures today.

I love that there’s a whole show about the love of reading and that it featured (loosely) Enid Blyton. It’s not on at a time our TV is usually on so I rarely see it, but I imagine there are other fun episodes which adults will get something out of that children don’t.

The general animation is fine, quite simple – I find the really stylised kind quite annoying as it’s distracting when you realise the Powerpuff Girls have no fingers and start wondering how they hold any of the things they pick up. Although the dogs and the backgrounds are better than the human character in this episode. Enid has those floating eyebrows that really annoy me. Either show the face and the eyebrows properly or accept that at least one eyebrow will be hidden by the hair! She also has an odd nose and crosses in her ears.

There is a weird moment in the middle where Enid behaves like a Scooby-Doo character and calls Dog Dr Bad the Evil Master of Disguise and tries to pull his mask off, and she does mention using a rocket to get to Skull Island but I imagine they were trying not to over-load it with Blyton references.

Lastly, I’m not a big dog person but I like this dog (or Dog) as he loves the smell of books and so do I.

This entry was posted in Blyton on TV and tagged CBeebies, Dog Loves Books, Enid Brighton. Bookmark the permalink.