Cunningham and Petrov: The Mystery of the Missing Children chapter 25

Last time Meier and Erlick attempted to capture the escapees, but the escapees captured them instead. 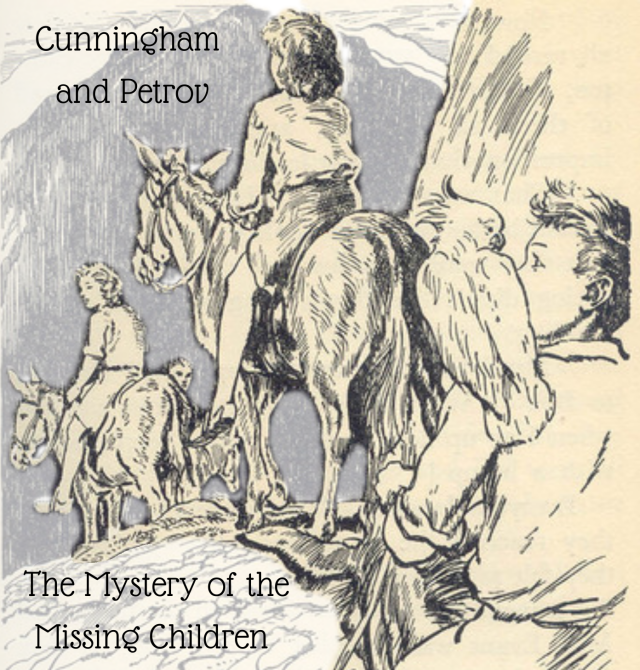 “Wipe your feet! Pooh! Gah!” came the sudden cackle from Kiki, to fill the sudden silence. She started one of her dreadful cackling laughs and say happily on Jack’s shoulder. “What do we do now?” Jack asked Bill. “It’s a long way from home, Bill – and we’ve got no food to keep us going if we have to walk back.”

“Effans and Trefor and David are not far off,” Bill said. “I told them to stand by somewhere near this mountain with plenty of donkeys, in case we needed them. I wasn’t sure if the helicopter would fly very far with such a lot of you on board!”

He was as relieved as Lucy-Ann about that, and commended himself silently on his foresight. Of course he hadn’t foreseen having to abandon the helicopter atop the mountain, but still.

“Can we take the dogs back with us?” Philip was asking. “I could look after them till we get them away some place. I daresay you’d like them for the police force, Bill. They’re jolly well trained.”

“Thanks for the offer,” Bill said, grinning. “I’ll accept it.” Johns’ eyebrows had risen at the mention of ‘police’ from Philip but he said nothing. Bill shot him a ‘not now’ look. “And now, quick march!” he encouraged everyone off, away from the mountain with Mieir and Erlick walking grudgingly with them.

Johns covered Meier and Erlick as they marched. He had searched them and decreed them weapon-less, which was a relief to all. Not long after they set off the children admitted to being hungry, something Johns was beginning to realise was a very common thing when it came to children. After Dinah had expressed a hope that Effans had brought food, Bill reassured her. “Well, Mrs Evans was so upset to hear that you were lost, that she immediately did an enormous baking and I believe two of the donkeys are laden with the results. So let’s hurry!”

“Where are they?” Jack asked, obviously thinking with his stomach now that the danger was over.

“In the Vale of Butterflies, waiting for us patiently.” Bill couldn’t help grinning now. Nothing had gone quite to plan, but it had worked out in the end. The children had missed the Vale on their trip thanks to David’s detour, but as he said to them it really was easy to find if you followed the map properly.

They all chattered happily for a while, talking about the Vale of Butterflies and how everything had come right in the end. It was actually very pleasant, almost as if they were simply on holiday. Only Mieir and Erlick’s glowering faces spoiled the effect, so Bill tried not to look directly at them for too long if he could avoid it.

He knew he could trust Johns to keep the two of them inline, especially with the dogs milling around too, but still, he kept at least half his attention on the children and the other half being aware of the two men.

As they walked through a narrow pass, he knew that the Vale of Butterflies would be just on the other side below them and so when they emerged, he turned to take in the children’s faces. He was not disappointed, they all looked absolutely delighted with what they were seeing. In fact they looked almost as delighted as they had when he had landed on the mountain to rescue them!

He had already seen the valley of butterflies briefly, and knew it was simply alive with every colour of butterfly one could imagine. He looked forward to a closer look, however.

“Why are there so many butterflies?” Dinah asked in wonder.

“I suppose because there are so many varieties of food-plants,” Bill said, sounding knowledgeable even to himself. “This valley is apparently as famous for flowers as for butterflies,” he went on.

Philip then spotted Effans, Trefor, David and the donkeys and their was a happy reunion – though David, Bill noted, looked suitable ashamed.

“He got it hot and strong from Mrs Evans when he arrived back alone with the donkeys chasing after him,” he explained to the children. “I also had a few words to say to him, as you can imagine! So now he feels he can’t look anyone in the cave. It won’t go him any harm to feel like that for a while. He behaved like a coward!” he said, starting to feel rather cross all over again as he thought about it.

Lucy-Ann, the kind-hearted girl that she was, however spared David some sympathy and a smile which he accepted gratefully.

Bill had Philip tell the dogs to guard the prisoners so that the rest of them could make a start on Mrs Evans’ picnic. “A pretty couple,” Bill said as Meier and Erlick began to bicker. He smiled in satisfaction. It would be too easy for them now. All he had to do was get them back to civilisation, locked up in separate rooms and then when interrogated they would be nicely played off against each other until the SIS had found out what they wanted. Then they might be handed over to the Welsh police, depending on what they had revealed. Either way, their futures did not look rosy.

“I think we’ll turn our backs on them. They spoil the view.” They did just that, and found that Mrs Evans had truly out-done herself. There were several kinds of meat, eggs, cheese, fresh salad, home-made lemonade, fresh bread, pies, tarts, cakes and more. Bill doubted that he could take a bite of everything even with the emptiness of his stomach.

It was a glorious picnic through and through – and not just for the food. The children were full of chatter and delight as the butterflies flitted around them, and Kiki showing off to Johns and Effans. Effans of course laughed uproariously, so much so that he almost choked. “Death by parrot…” Bill muttered to Johns who was watching Kiki’s antics in a mostly straight-faced way, only the odd smile at her most outrageous phrases showing how amused he was.

After everyone had eaten enough to sate their immediate hunger Bill (feeling particularly magnanimous due to the scenery and company) took some food over to the prisoners. The dogs were well-trained enough not to attempt to steal anything, though they did look at the chunks of bread-and-meat in interest. There would no doubt be enough left-over for them to have something each, even with Snowy taking titbits from everyone.

Once the children could eat no more, they wandered off to explore a little, and Bill went through the nights’ exploits with Effans who hung on to every word in amazement. Trefor and David listened too, but it was unlikely they followed too much of it. Effans could translate for them later, Bill thought as he kept half an eye on the children’s movements. It wouldn’t do to lose them so soon after rescuing them. They had a while before they would need to think about setting up their camp, for it was too late to set off for home now, so he would let them explore in the meantime.

This entry was posted in Fan fiction and tagged Bill Cunningham, Cunningham and Petrov, The Adventure Series, The Mountain of Adventure, The Mystery of the Missing Children. Bookmark the permalink.

1 Response to Cunningham and Petrov: The Mystery of the Missing Children chapter 25