Cunningham and Petrov: The Mystery of the Missing Children chapter 29

Last time Bill, Anatoly and Johns made their plans. 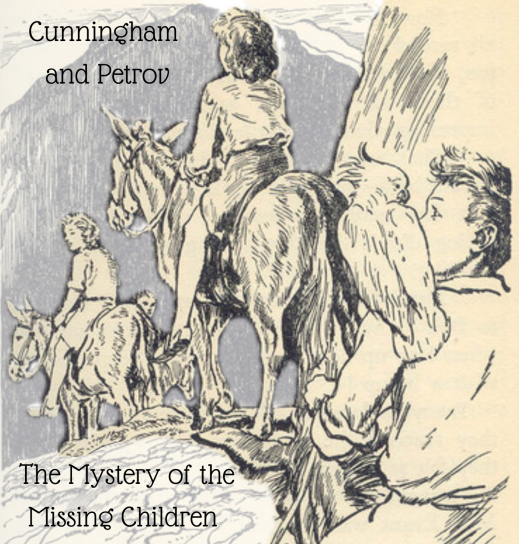 Johns returned later that day, just as the sun was sliding down behind the mountains behind the farm house. He brandished a stack of papers at Bill. “I took the liberty of having them enlarged and some of the writing made clearer,” he said, handing them over. “Hope that’s all right with you!”

“Smart thinking,” Bill acknowledged, taking the maps from him and handing one to Anatoly so he could study it. “Anything else to report?”

“Our colleagues, scientists and all, are taking up almost every available room across three pubs in Merthyr, and will be ready to go first thing in the morning. They’ve come up with an idea that we didn’t, actually…”

Johns took a seat and ran the idea past Bill. “There are two good sized helicopters on standby, down in Cardiff and it won’t take them long to fly up here in the morning, refuel quickly and collect us from wherever we decide. They can then drop half of us off in the valley, near enough where we landed with Philip, and the rest can be parachuted in from the top of the mountain.”

Bill slapped a hand on his thigh. “Yes, that’s a very good idea. I didn’t suggest it myself as I didn’t think we’d get the budget for choppers. But if we have them, then that’s perfect.”

Anatoly grinned. “We can come at them from both sides.”

“Indeed we can,” Bill agreed.

“There’s one or two chaps good with repairs, too,” Johns added. “They’ll see if they can’t get our helicopter back in the air to help ferry the prisoners back.”

“Or at least get it moved from the platform so we can land our choppers on there,” Bill added wisely. “But I wouldn’t say no to a third chopper.”

“What time do we want to start off in the morning?” Anatoly asked, leaning back in his chair. “Presumably, the earlier the better to catch them as unawares as possible?”

“Unfortunately, yes, I think we ought to make it an early start,” Bill sighed. “We can drive down to Merthyr and meet the choppers there, will that work, Johns?”

“I’ll drive back down now and telephone to arrange it, sir,” Johns said, getting up again.

“Is it worth us all going, so that we are all able to start as soon as possible?” Anatoly asked, clearly keen to go. “It seems like a waste of a petrol ration for you to go back and forth to Merthyr again today and then tomorrow.”

“Up to the boss,” Johns deferred to Bill. “I used my warrant card to get petrol, and I don’t mind driving again, but we should be able to get rooms in Merthyr if you prefer.”

Bill didn’t really want to be away from the children and Allie but he knew Anatoly had a point. Johns would be tired out before he saw the action and he didn’t want the man to miss out. This was as much his job as Bill’s after all. “Given that we are getting helicopters, I think it might be a good idea not to bash the petrol budget any more than we have to,” Bill said eventually.

Johns nodded. “I’ll be ready to go whenever you are, sir.”

“I have not even unpacked yet,” Anatoly said, indicating his bag which was ready to go also.

“I’ll just need to let Allie know,” Bill said, hoping that she wouldn’t mind. He would hopefully have all this tied up within a day or two, then they could get back to their holiday.

Anatoly and Johns let him wander downstairs to speak to Allie. Bill found Allie in the sitting room, reading her book, her wrist still in a sling. She looked up as he entered.

“Hullo,” she said fondly. “Have you finished talking with Anatoly and Johns for the moment?”

He took a seat next to her. “I think we are all set for what we need to do,” he said. “We’ve got men, we’ve go maps, we’ve even found a couple of helicopters which will speed things up greatly.”

“Oh, well that’s good news,” she said quietly. “You will get them all, won’t you? And do you think you’ll be gone long?” she put her book to one side and turned to look at him. “And you will be careful, Bill, won’t you?”

“Yes, a day or two at most, and yes,” he said, answering her questions in order. “We’re going to set off tonight, actually, and get an early start from Merthyr tomorrow. Johns says that the men are in rooms at a few pubs and there should be space for the three of us as well.”

Allie nodded, “that would make sense. Hopefully everything goes smoothly.” She looked a little worried, and asked again, “and you will stay safe won’t you?”

“When am I ever not careful?” he asked her teasingly.

“All the time,” she said, seriously but she smiled a little at him. “I would just like you to stay in on piece please?” she added, wryly. “I know I’m one to talk, but both of us can’t be out of action if the children take off again!”

He ignored the jibe. “Now, that’s a thought,” he said, more-or-less seriously. “Are you sure you’re up to keeping them out of trouble while I’m away for a few days, or do I have to leave Johns behind to watch over them?”

“Oh yes,” Allie said firmly. “I’m not letting them leave the farm from now on, unless I’m with them. They won’t get past me!”

Bill grinned. “They know better to cross you.” He had just moved closer, with the intent to kiss her when he heard the heavy boots of Johns and the lighter ones of Anatoly coming down the stairs. Both men looked carefully ahead as they carried various bags of personal items and kit out to the car.

Allie blushed a little and cleared her throat. “You had best get your things ready then, Bill,” Allie said quietly. “Don’t keep the others waiting, and you better explain to the children where you’re going.”

“I’m all packed. I’ll just go up and get my bag,” he said. Having collected his bag he returned downstairs then headed out to the barn where the children had taken to spending a lot of time, so that the dogs could be around Philip. It was cheerily lit by a lantern hanging from a beam and the children had made themselves comfortable on hay bales.

“Don’t stay out here too late,” he warned them. “Your mother will be on her own tonight as I’m off to Merthyr to meet up with the rest of the team.”

“Oh Bill, are you going back to the mountain? Are you sure it’s safe to do so?” Lucy-Ann asked, concerned.

He sent her a reassuring smile. “With Meier, Erlick and the dogs out of the way it will be a piece of cake.”

“No, not this time,” Bill said. “I don’t think there will be anything like as much trouble as before, there could still be some issues with the men and servants there. No you are better off here at the farm, where you won’t get in my way!” he ended up teasing.

“We wouldn’t get in your way,” Philip began but Bill held his hands up.

“Look, I’ve got to go. Take care of your mother, all right? I don’t want to come back to discover that she’s been spirited away or stumbled into a criminal gang.”

“Of course, Bill,” Dinah said with a nod. She didn’t have any wish to go back into that mountain, that was for sure!

1 Response to Cunningham and Petrov: The Mystery of the Missing Children chapter 29