In the books we follow the heroine, Darrell Rivers, through her school life which include her ups and downs, friends and enemies. It has to be my favourite school series and has always made me want to attend Malory Towers.

We meet an excited Darrell ready to set off to school in her brand new uniform. It’s nice to have a book start with someone being excited to go off to school and even though the idea of a brown and orange uniform sounds quite unappealing, I do think it could look very nice if matched properly.

We follow Darrell from her home to the station to catch the train for Cornwall, where Malory Towers is located. Naturally Darrell is nervous about her new school, wondering what it will be like and if she’ll make friends. Blyton makes it very easy for the reader to relate to Darrell from the beginning, and these nerves that Darrell experience make her more human. The fun really begins when Darrell is plunged into the world of Malory Towers at the station. First she is introduced to the sensible Miss Potts who is to be her form mistress and head of North Tower where Darrell is to sleep.

From the formidable Miss Potts we are then introduced to Alicia Johns, a girl in Darrell’s form who has been at Malory Towers for some time (though we are not told how many terms Alicia has been at the school). Darrell takes an instant liking to Alicia, hoping that this older girl will be her special friend.

Alicia comes across as a hard character from the start and I’ve always wondered why Darrell so wants her as a friend when it’s easy for the reader identify her as a a class clown and a bit of a bully. Alicia does get a little better, but I’ve never really ‘warmed’ to Alicia or understood why you would want her as  friend. She reminds me of the ‘popular’ girls at school who would bully you without a thought to your feelings if you got on their wrong side.

Gwendoline Lacey is also a new girl, however she has none of the characteristics Darrell has which make her so instantly likeable. Gwendoline is painted as a cry baby, spoilt and worst of all in the sporty world of Malory Towers, overweight. The girls  don’t make Gwendoline’s life easy, and Alicia especially says some quite spiteful things to Gwendoline over the course of the book.

The only other new girl to join them is quiet Sally Hope who seems the complete opposite to everyone else in the train carriage.

So on to Malory Towers, with its four towers North, South, East and West which hold the girls’ dormitories and common rooms. Darrell, Sally and Gwendoline are all in North Tower together, with a stern matron and Miss Potts to keep an eye on them.

Alicia pretending to be deaf by illustrator Stanley Lloyd.

The term begins quite calmly with lots of fun but hard work as well. Alicia plays a trick where she pretends to be deaf to tease Mam’zelle Dupont but it backfires when Miss Potts discovers the trick, and later on in the story (but I won’t give that away!).

Soon Gwendoline’s spiteful nature becomes apparent, as she starts being mean towards the smallest member of the form, Mary-Lou, and playing nasty tricks on her. The tricks escalate after Darrell snaps at Mary-Lou for following her around. Gwendoline’s truly spiteful nature shows just how wicked a person can be, especially to vulnerable younger  girls.

Darrell also behaves appallingly towards Mary-Lou at the beginning of the book, and she doesn’t seem to realise that she’s almost as bad as Gwendoline in that respect. After Sally’s illness, when she explains to Darrell that she’s been trying to buck Mary-Lou up the wrong way, Darrell’s whole attitude towards Mary-Lou does suddenly seem to do a complete 180 degree turn.

The real drama starts during half term weekend, when Darrell’s parents come to see her, and her mother spots Sally Hope in the distance and would like to have a word with her because she knows Sally’s mother. Sally behaves quite rudely towards Darrell, insulting her parents when Darrell tries to give Sally the message, and Darrell’s temper gets the  better of her. She sends Sally flying across the room, and causes her great pain. I shan’t give away what the cause is, you’ll have to read it yourself to find out!
Sally’s brief illness acts as a catalyst for a complete change of character. After being a very closed off character who often fades into the background, Sally’s persona changes and she becomes a very lovely person very quickly and  she becomes like an open flower instead of a closed one. The new Sally is instantly likeable. I think you see more of Sally’s personality in those last few chapters than you ever do in the rest of the books, except in the 3rd form where Sally’s jealousy gets the better of her, but at the same time she does fade into the background a lot of the time.

I hope I haven’t given too much away from First Form at Malory Towers, but I don’t want to ruin the book for you. Personally I love this book. The ups and the downs of the term make it such a thrilling read, for instance when  Darrell is nicer to Mary-Lou and the spiteful tricks Gwendoline plays.

If you like Blyton’s other school series, Malory Towers is one not to miss. Trust me, you won’t regret picking up these gorgeous books! 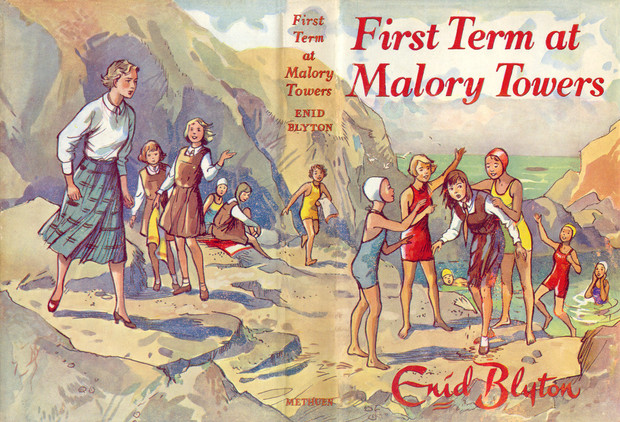 Wraparound dustjacket from the 1957 reprint of Malory Towers by illustrator Lilian Buchanan.

Or read a review of the audio adaptation of First Term here.

This entry was posted in Book reviews and tagged First Term at Malory Towers, Malory Towers. Bookmark the permalink.