I’ve now reached the last of Enid Byton’s series, or rather, the end of the ones I actually owned. I’ll talk about The Secret Seven, St Clare’s, The Farm Series and The Naughtiest Girl in this post.

I didn’t really read many Secret Seven books as a child mostly because I didn’t own many. I had three paperbacks all by Knight, though one was missing its cover. I think I left the Secret Seven a bit late, and didn’t read them until well after the Famous Five, Adventure Series etc, which would account for me being a bit disappointed by them – they’re definitely aimed at younger readers.

I’ve also discovered another copy of Secret Seven Mystery – a Hodder paperback from 1992 – which was presented to my sister by Strathmartine Parish Church Sunday School. I’m pretty sure that wasn’t as early as 1992, as she was only two then. It must have been at least 1997, by which time I’d probably read the Knight version so didn’t bother with a shiny new one. Oh, and it was Well Done Secret Seven I had without a cover.

The Knights were also illustrated by Derek Lucas, and it looks like he’s got them in jeans and t-shirts. Most of the pictures are on the small side so it’s hard to tell. They’re not flares at least.

Another series I didn’t really read as a child was the St Clare’s books. I think I was really put-off by the cover on the one title I had. (I might have had another – The O’Sullivan Twins but I’m not sure, if I did it might have been coverless like several other books I inherited.)

The cover is more like the modern Nancy Drew Files books than a Blyton one, and it just didn’t inspire me to pick it up at all. I think I did read it at some point and found it was nowhere near as good as Malory Towers or The Naughtiest Girl. It had illustrations by Jenny Chapple whose work I like on other series, but starting with the fifth book in a six book series obviously didn’t help me in liking the book.

The order I’ve examined books in this series has changed over the course of it. I started with what I’d read first then sort of moved on to other favourite series and then not-so-favourite ones, until I’ve now arrived at The Naughtiest Girl. This is so late in the series purely because I had an omnibus edition and there’s only one picture and not an awful lot to say about it. (If I’d had any word count left in earlier posts I might have snuck it in earlier, but alas, I rambled.)

The omnibus had illustrations by Gareth Floyd (and surprise surprise I can’t remember what they were like). I loved the series and read that omnibus over and over despite it being a bit uncomfortable to hold open due to the depth of the pages (but maybe I just hold books oddly).

I had only one of these (and I’m not even sure I knew it was from a series). 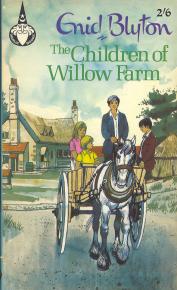 I think I liked this book well enough, though I might have liked it better if I’d read the first in the series The Children of Cherry Tree Farm. It was illustrated by Clyde Pearson who –  as I’ve mentioned in a couple of these blogs – I’m not a big fan of. Sorry Clyde.

SERIES I DIDN’T HAVE

I’ve completed collections of most of these series as an adult though as yet I’ve not started The Faraway Tree, Noddy or Brer Rabbit, and I’m one book short on The Wishing Chair, and The Happy House Family.

I have now covered all of the Blyton series I wanted to, but this isn’t the end of this blog series, as I’ve still got to look at Blyton’s many stand-alone titles. Are any of these versions familiar to you?