In The Fifth at Malory Towers 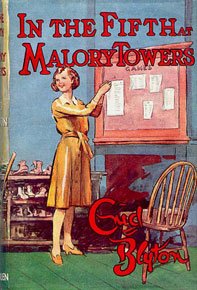 Original dustjacket by Stanley Lloyd in 1950.

I know it’s been a while since my last Malory Towers review and I apologise. I just kept having new ideas. Anyway, I’ve managed to start and finish the fifth Malory Towers book in one day and I’m now in a position to be able to review it for you.

For me In the Fifth at Malory Towers is tied for first place with Third Form at Malory Towers. There is something about this book, perhaps the characters’ development, the revelation of Darrell’s talent, the mire of problems that the girls face and some well-developed  new characters for us to enjoy.

We dive straight into the action with this book, starting with Darrell and Felicity on the last leg of their journey to Malory Towers. After that we’re almost immediately plunged into the world of Malory Towers with Darrell. In this book you can feel a shift in the reader’s perception – In the Fifth offers more of an insight into Felicity River’s time at Malory Towers than the last book. This shift is almost to prepare the reader for the next book, where there is more focus on Felicity and her friends.

But for this book, we are safe and sound with Darrell and the gang.

Immediately we are back in the swing of things, girls everywhere and it’s not long before we’re up in the girls’ new form room taking in the view, discussing what the term will bring and the new girls. As Fifth Form at Malory Towers actually follows on from the end of the Upper Fourth at Malory Towers, we have some fluidity in the transition from Fourth Formers to Fifth Formers and the girls do talk about those members of their class that they have left behind or failed their school certificate. Very pointedly we’re told that Alicia is allowed to go up to the Fifth Form with the others because Miss Grayling wrote to Ms Johns (Alicia’s Mother) and, as Alicia puts it, said  “I could pass the school cert. on my head any time I liked” and that she was to work for it on the side.

Bill and Clarissa on their horses.

Once all the girls are back, and settled – with Bill and Clarissa who played significant parts in the last book “whinnying” away together about horses and Ruth Batton without her twin Connie – we’re introduced to the new girl. Maureen Little who, believe it or not, is worse than Gwendoline. A Gwendoline Mary 2.0 if you will as she’s basically Gwen without half as many corners knocked off.

The girls know instantly that they will have to do something about Maureen!

We technically have three new girls this term, as two have been left down from the old Fifth Form, Catherine Grey and Moira Linton. Neither are a great favourite with our old friends. Moira – who is made head of the Fifth – is domineering and bossy while Catherine is described as a doormat, self-sacrificing, martyr-like and over-helpful.

The first big surprise of the Fifth Form is that Darrell is made head of Fifth Form games, which means that she gets to help pick teams for the younger school, and helps train them. She immediately imagines her first class lacrosse team that includes her sister Felicity. And as it turns on Felicity does make it onto a match team on Moira’s insistence. The match teams which she has put together so far have won their matches, but the match we are treated to is one where her little sister Felicity plays – much to the disgust of Alicia’s little cousin June, who accuses Darrell of favouritism.

The next big surprise is that the Fifth Form are allowed to produce the school’s Christmas entertainment. This sends the girls into a frenzy of delight until the dominating Moira takes control, organizing meetings and so forth. 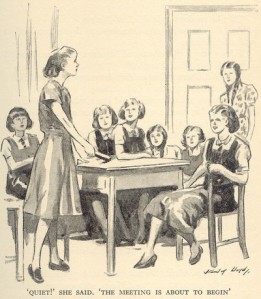 In the end Darrell is asked to write the script for a pantomime of Cinderella. This at first stuns our heroine until she gets going. At one point she asks Sally “do you think I might possibly have a gift?” to which Sally’s reply is that she thinks Darrell does.

We have an interesting term as the pantomime progresses, we have tricks from Alicia’s cousin June – in the first form – but none from the Fifth Form as they feel that they are too old to play tricks on the mistresses now.

It’s a fascinating trick that consists of a balloon arrangement under June’s clothes, she inflates the balloons by pulling a string, and tricks Mam’zelle into thinking she’s getting fat. I shan’t spoil it for you, but nothing goes as planned, with hilarious consequences.

With the build up to the pantomime, Darrell’s drafting and being head of games, she’s very busy.

Now we move to the main focus of the book – the pantomime, which Darrell has completed writing, Irene has finished composing and all the other bits and pieces are half way through being completed. The only things left are to cast the pantomime and then rehearse.

Gwendoline and Maureen immediately see themselves as Cinderella, but after some cutting remarks from Moira, and the girls trying to take Maureen down a peg in a particularly viscous scheme, they realise that they won’t get to be Cinderella at all, but still hold out hopes for being another main park in the show. Both girls are self-centred enough to believe that they stand a chance of getting a good part.

In the end, Mary Lou is cast as Cinderella, to much delight. It’s a perfect piece of casting because even though she will be scared, she’s perfect for Cinderella.

From the casting, things pick up quickly, mostly because we haven’t got many pages left. We are ‘treeked’ by Mam’zelle, rather terrifically, Alicia and Moira have an explosive row, and then a big plot point of the book comes around, the sending of anonymous letters to Moira. 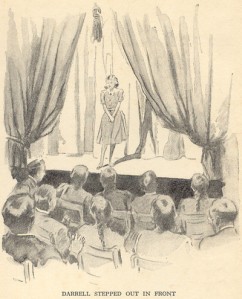 Darrell taking in the response to her pantomime.

It’s a quick finish  with someone learning a very sharp lesson and getting a good talking to, but soon all is glossed over as the pantomime is ready to start.

The parents are settled, and the orchestra is in place. We stand backstage with Darrell as she gazes solemnly out on to the stage worrying whether the pantomime will ever be a success…

I think I’ll have to let you read on to find out for yourselves.

Overall, In the Fifth at Malory Towers is one of my favourite books, lots of things to keep you busy, and interesting plot twists and the pantomime adds an extra dimension to Darrell’s character. So a brilliant read with one of our favourite heroines. Definitely worth picking up if you haven’t before! 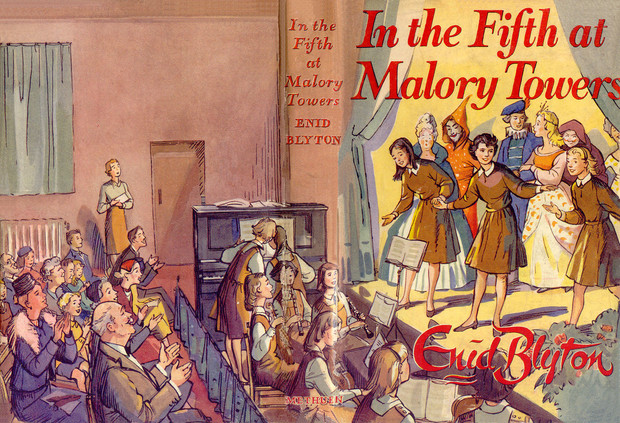 Or read a review of the audio adaptation of In the Fifth here.

This entry was posted in Book reviews and tagged Darrell Rivers, Felicity Rivers, In the Fifth at Malory Towers, Malory Towers, Sally Hope. Bookmark the permalink.

6 Responses to In The Fifth at Malory Towers