Tell Me About Enid Blyton by Gillian Baverstock – A review

There are a number of books out there about Enid Blyton, her works and her life – you can see most of them here. I’ve already reviewed Who’s Who in Enid Blyton by Eva Rice and I thought it was time to look at another one. I didn’t have much time to read and review a book this week, so I’ve picked the shortest book I have about Enid Blyton.

Tell Me About Enid Blyton is a slim paperback book published by Evans. It is part of a series of short books looking at the lives of authors and illustrators such as Beatrix Potter, Quentin Blake, Roald Dahl and Dick King-Smith. The books have been written by a variety of people, presumably those already with good knowledge of the subject. Fittingly Blyton’s book has been written by Gillian Baverstock, her eldest daughter.

For example, the first page tells us that Enid was born in London, in 1897, more than a hundred years ago. Her parents, Thomas and Theresa had just moved from Sheffield. Thomas loved baby Enid very much.

Though the language is simple, the book doesn’t avoid mentioning some of the more distressing parts of Blyton’s life. It talks about the time she nearly died of whooping-cough, and about how her father left the family when she was 13.

Some parts are simplified though. For example we’re told Blyton disliked taking care of her siblings and helping round the house as well as how her mother didn’t like her writing stories but it avoids going into detail about the difficult relationship between the two. Similarly it is mentioned that Blyton’s first marriage ended during the war, and she then remarried but no other details are given.

The book is clearly aimed at young readers, keen to know more about their favourite author, so it is not surprising the book does not delve into the murkier areas of Blyton’s marriages, her relationship with her mother, her miscarriage or the decline of her health during the 1960s.

Some of the book is written from Gillian’s perspective, using a first person narrative. She tells us a few childhood anecdotes though she refers to her mother as Enid throughout which does sound slightly odd – especially as she said on the first page that Enid is her mother.

The book is filled with lovely photographs of Blyton, her family, her homes and of her books and characters. At the end of the book is a useful timeline, outlining some of the more important events in Blyton’s life.

Despite the short length of this book – it’s only 22 pages long (the actual book starts on page 5, and the last page is an index/glossary) – it certainly packs in a lot of information. Most of the basic information about Blyton’s life is there as well as several interesting facts – like the Mary Mouse books being made out of offcuts from other books due to war-time paper rationing.

I think children will really enjoy this book, as it contains lots of interesting information without getting bogged down in potentially boring details. There are plenty of interesting pictures on every page as well – ones which directly relate to the content of the text. 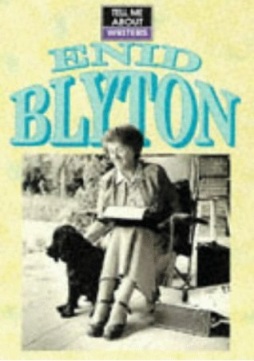 I hope to look at more of the biographical books about Blyton soon (I have six more of them!) so I will have to make sure I make time to read them so I can review them.

P.S. I apologise for the shortness of this review but it would be hard to write more about such a short book (maybe it makes up for subjecting you all to over 6,000 words about Who’s Who?)

This entry was posted in Book reviews, Other Authors and tagged Biography, Gillian Baverstock, Tell Me About Enid Blyton. Bookmark the permalink.