Following on (sort of) from looking at the 21 Famous Five books, I thought I should look out at the short stories featuring the Five as well. There are eight stories, all written during the years the full length books were being published.

In chronological order they are:

I have the four stories that appear in the Magazine Annuals, as well as the 1999 Red Fox paperback containing all the stories. I won’t be reviewing the stories in chronological order as that’s not the order they appear in the collection.

Five Have a Puzzling Time and Other Stories, Red Fox, 1997

The collection has been illustrated by Hemesh Alles, and while they’re decent drawings (if a bit faint in places, and they’re just lines, no shading) they can’t compare with Soper’s version of the Five for me (Soper also illustrated the four Magazine Annual stories.)

Anyway, on to the first four stories from the collection.

FIVE HAVE A PUZZLING TIME

This story starts one night at midnight. George, awake with tooth-ache, sees a light on Kirrin Island and is adamant it must be trespassers. Uncle Quentin won’t let her go off in the middle of the night to instigate, and she can’t go the next day because she has to go to the dentist. It’s then up to Julian, Dick and Anne to head over to the island to investigate.
The three have a good hunt around the island, but they can’t find any sign of anyone having been there. Julian and Dick have a last look while Anne paddles in the sea, but when they are about to leave, one of Anne’s sandals has gone missing! Strange items are missing back at Kirrin Cottage too, oranges, grapes, dog biscuits and chocolates. The Five row to Kirrin Island again, and this time they find orange peels and grape pips, which can’t be a coincidence, can it? When someone makes off with some chocolate from practically under their noses they know something’s definitely afoot and lay a barley-sugar trap for the thief. Of course they catch him, but I won’t give away his identity. The solution to the mystery of how he got there is quite clever, though.

I’ve read all the stories before, but I couldn’t quite remember who the thief was. This is a decent story, though George takes centre stage for most of it. Because it is a short story (under 50 pages) we sadly don’t really get to see any of the other characters displaying their traditional behaviours, apart from a little good-natured teasing, and there’s little time for the usual fun and games or delicious feasts. Saying that, it’s a nice little mystery with a satisfying resolution.

The original illustrator was Eric Parker. I find his illustrations interesting, they have an unusual look to them.

GEORGE’S HAIR IS TOO LONG!

As the title says, George’s hair is too long (according to her anyway), and she is desperate to get it cut lest she start looking like a girl. The hairdresser is shut when they go, so George goes to the ironmongers to borrow scissors to cut it herself. While the ironmonger is getting the scissors two men burst in, lock them up and steal the safe. They nearly run over Anne along the country road from the village, and then one of their van tyres blows. They’re rather stuck, as it would seen neither of them can change a tyre, and the boys refuse to help. Feeling anxious Timmy heads back to find George, while the others start feeling suspicious of the men. Thanks to Timmy and two chaps in a passing car, everything is tied up neatly by the end of the story, but poor George still hasn’t managed to get her hair cut!

There are some good funny moments in this story. Julian teases George about having to look like a boy, and he and Dick say some great politely-rude things to the two criminals. Oh, and the ironmonger is called Mr Pails!

This story is really short (only 14 pages) so everything happens in one afternoon and things are resolved quite quickly, though none of it seems particularly rushed. There’s no mystery to solve this time, but the Five do apprehend some criminals so it’s still a good ending.

Eileen Soper’s illustrations for this story are great, of course. 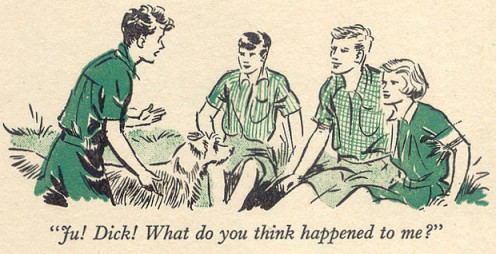 On the beach the Five meet Oliver, Uncle Quentin’s scientist friend’s son, and then witness his kidnap by two nasty men who’ve been hanging round for a few days. The kidnappers leave their dog to run after the car, so Timmy is able to follow them. They find Oliver in the town, but they’ve got to deal with the men’s dog before they can rescue him.

Another very short tale, which does feel a touch rushed and contrived. Oliver’s father had letter that morning threatening to kidnap his son if he didn’t give up some information, and then he let his small-for-his-age 10 year old go to the beach alone. The men then kidnap him, right infront of a bunch of witnesses, and don’t even put their dog in the car when they go. Conveniently, the men are out when the Five find Oliver and their only obstacle (the dog) is subdued after a very brief scary moment.

A bit disappointing, over all, but kids will probably still enjoy it. This was written late on Blyton’s career, about the time her books started to decline in quality (think Five Are Together Again, The Mystery of Banshee Towers and The Hidey-Hole) so perhaps this story is another example of that. It’s just lacking something for me. There are some silly or contrived moments in the novels, but perhaps just not so many in so few pages.

The original illustrator is uncredited, and unfortunately I’ve never seen those illustrations. 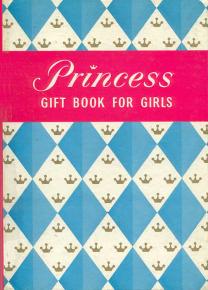 It’s a very, very hot afternoon so the Five drag themselves into the woods to laze about and cool off by the stream. Timmy is more energetic than the others and goes off rabbiting while they sleep. Julian is awoken by a motorbike, and the four watch two men hide some loot in a tree. They can’t do anything without Timmy, and he’s still off hunting for rabbits. Will he come back in time, or will the men get away? I think you can probably guess.

This is the shortest story yet at 11 pages, and yet the first few do really capture a hot, lazy afternoon. The action doesn’t feel contrived at all and it’s another satisfying ending.

This one originally had lovely illustrations by Eileen Soper. 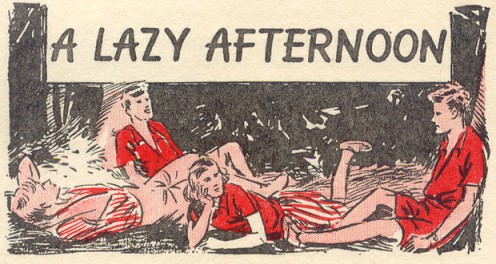 I will save the other four for another post as I think I’ve gone on long enough for one day!