Part one of Su’s McDonald’s series is here.

This story comes from Enid Blyton’s Magazine Annual No. 4 first published 1957.  It is a short story and therefore, unlike Secret of the Old Mill, has not been drastically shortened.  There have been a few changes such as baskets become hampers, gate is now lever, Williams becomes Mr Williams, scared becomes worried, buck up is keep going and make haste changes to hurry up.

The main change is that the children no longer open the gates across the railway-crossing; instead they have to gain access to the signal box so that they can use a lever to open the gates.  This causes quite a few changes to the text towards the end of the book although the signal box is still described as a pretty little place with a tiny garden of its own.  It has a garden originally as it is a small cottage where Williams lives, next to the gate. 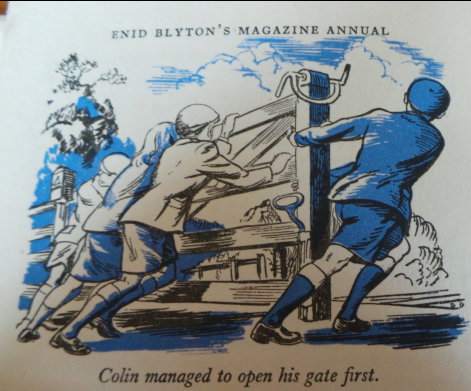 The line A surprised fireman looked out of the cab at the children on the line below has been completely missed out yet the illustrations depict a steam train and the train still whistles as it comes down the line.

Everybody has the most enormous ice cream at the end of the book, which version do you prefer?  I think I might choose the modern version, fancy eating ice creams with a shirt and tie on! 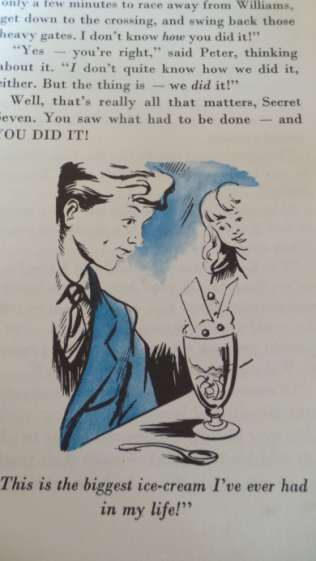 This story that I used for comparison comes from Enid Blyton’s Magazine Annual No. 1, first published 1954. It is no longer morning school but just plain old school now in the newer version but there haven’t been too many changes through this book.  Television is mentioned in the original book and this has been kept the same.  The word jolly is used quite a few times in the story and this has been kept, which surprised me a little, as well as the professor having a maid who shows them into the house.  The names of twins at the fair are still Dickie and Danny and the bad guy’s name is still spelt as the original Jamey.

There are a few small changes sprinkled throughout the book, some of which I can’t understand why they warranted a change.  These are to a different becomes in a different, great tube becomes great long tube, firing becomes setting fire and telephoned to the farm becomes telephoned the farm.

In the original the bad man they see through the telescope is described as a tramp but this has been changed to a man. He is initially described as having a limp and a beard and these facts feature later on in the story to form part of his description.  The limp has been cut completely from the new version with the beard only being mentioned once.  This is slightly strange as at the end of the book, when they describe the man as being short, this leads the farmer’s wife to declare Why – that would be Jamey!  They could have at least mentioned the beard to make it sound slightly more believable or are there so very few short men nowadays?

Other small changes are that Buck up, idiot becomes Hurry up. In the original the others call Peter You selfish thing because he won’t let them look into the telescope.  This has been cut out completely, they now just ask for a turn. When they are eating the humbug toffees their speech changes but even this “sweetie speech” has been changed.  Peter says Uthing ooing which is translated as Nothing doing but in the new version it is Uthing oopening that translates as Nothing happening.

There is also a scene when the children are looking through the telescope, where the farmer is observed filling his pipe.  This is kept in both of them but when it is exclaimed that Colin can see what tobacco he is using this is changed to newspaper he’s reading.

Not too many differences but there is a very big difference in the illustrations especially the size of the telescope.  It is nice to see that they still know what a humbug sweet is though.