Five on a Treasure Island: An exciting dramatised adventure

No matter how hard I searched I could not find my Telegraph copy of Five on a Treasure Island, or Five Go Adventuring Again. I really can’t think where they’ve got to as I’d never have thrown them out. Stef has come to my rescue again though and sent me Treasure Island so I can listen and review. This is one I’ve heard before perhaps twice before I lost my own CD. 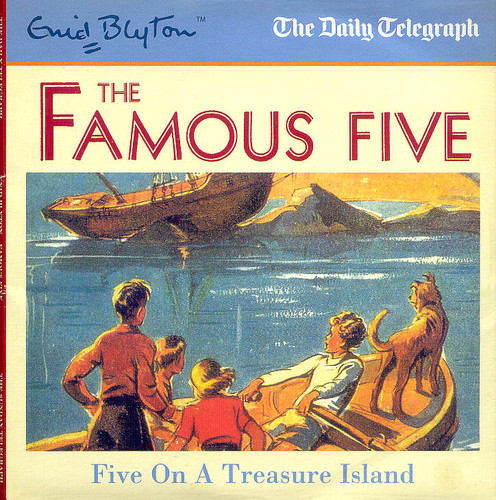 Five on a Treasure Island

The story begins as the book does with the children discovering they can’t go to Polseath like usual. The first time I thought the narrator said Polesend and had to skip back and listen again before I realised it actually was Polseath. I’d always said it Pole-seeth in my head, which would seem to be wrong! I Googled it and there is a Polzeath in Cornwall which is presumably where Enid was talking about?

This book has quite a small cast compared to some later ones so there aren’t a huge number of voices – the Five, naturally, Mrs Kirrin/Barnard, Aunt Fanny and Uncle Quentin and the phony antique’s dealer and his crony. I don’t recall hearing Alf/James actually and he’s one of the few other characters to appear in the book (if indeed there are any others.)

Uncle Quentin’s voice I liked, I thought it was quite like Christopher Good from the 90s TV Series. George sounds quite petulant and very girly at first which isn’t quite how I imagine her but she gets better as the story goes on (perhaps as the character improves the actress changed her voicing?)

Dick on the other hand seems to get worse as it progresses. When they chop down the gorsE bush to free Timmy from the well (a purely narrated piece in the book after George says “we’ll have to chop down the gorse bush”) Dick behaves like an utter baby. “Oww it’s really prickly!” he cries. And later, when they’re hacking at the door to the ingot-cave he does the same.  “Oww something flew out of the door and his my cheek! A splinter or something!”  In the book he’s quite brave but on the CD he sounds completely whiny and not like any of the Five would act.

Obviously with it being purely audio there sometimes has to be explanations given that aren’t in the book but there were a few times I cringed at the obvious exposition lines. For example when they first meet Timmy Dick cries “It’s a big brown dog, he looks a bit of a mongrel to me!” This could have been better coming from the narrator as it’s very unconvincing dialogue! Like wise as they all climb onto the wreck Julian says “There, now we’re all aboard,” which in real-life would have been quite an unnecessary line. It’s strange as I haven’t really noticed any of these on the other CDs.

Timmy’s quite quiet throughout the story but when we do hear him it’s a decent enough sound and not at all like some of the dreadful ones we get on other CDs in the series. I don’t recall too many other sound effects but there are plenty of good storm sounds, waves, wind, thunder and rain which all add to the atmosphere.

All in all a good listen (if not the best of the bunch) and I admit I hadn’t really noticed any of my criticisms on earlier, casual listens.

This entry was posted in Audio Books and Audio Dramatisations and tagged Christopher Good, Five on a Treasure Island, The Famous Five. Bookmark the permalink.

1 Response to Five on a Treasure Island: An exciting dramatised adventure