Learning French with The Famous Five by Chris

Posted on February 4, 2015 by worldofblyton

Elsewhere on this blog, Ellie has written about reading The Famous Five in French, and I want to add to that by recounting my experience of doing the same thing but for a very particular reason: as part of my attempt to learn French. Just to explain, I have been married to a French woman for 23 years but, because we live in England and she speaks perfect English, I have never bothered to learn French. When we see her family I get by on the basis of French O level, a bit of bluster (from me) and a lot of good will (from them). But in the last couple of years we have been thinking that when we retire we will move to France and, therefore, I have been taking French lessons.

Thus, for Christmas, my wife bought me the first five volumes of Le Club des Cinq, published under the imprint of Les Classiques de la Rose by Hachette Jeunesse, a division of Hachette. So far, I have read the first two: Le Club des Cinq et le Trésor de L’Ile (Five on a Treasure Island) and Le Club des Cinq et Le Passage Secret (Five Go Adventuring Again). Translation is by Anne-Laure Estèves and there are some quite basic line drawings as illustrations (illustrator uncredited). As is clear even from the titles, the translation does effect some changes, and in the comments beneath Ellie’s article, Serge has provided some very interesting, detailed information on these.

As Ellie has explained, the characters are renamed: Julian becomes François, Dick becomes Mick, Anne is Annie, George (Georgina) is Claude (Claudine), and Timothy (Tim, Timmy) is Dagobert (Dag, Dago). And Kirrin in Cornwall becomes Kernach in Brittany. This takes a little getting used to, but one soon adjusts. Regarding Dagobert, in the comments on Ellie’s post there is some speculation about this name, but my wife confirms Serge’s view that it refers to the name of a French King and, more specifically, a nursery rhyme that all French children learn (or used to learn). See this video.

All that aside, how does it work as an aid to language learning? Very well, I would say. The constructions of the sentences are quite simple, and this really helps to understand how these constructions work. All the small linking words – such as ‘en’ or ‘y’ – that are quite difficult for an English speaker – are easier to understand. Understanding words which have subtly shifting meanings depending on context (‘d’ailleurs’, for example = anyway, although, besides etc.) is aided by seeing them used in several different contexts.  I would say that it is sentence construction and grammar that are most helpful; vocabulary less so. For sure, there are various words (e.g. ‘épave’ meaning wreck, as in shipwreck; or ‘lingots’, meaning ingots as in gold ingots) that were unfamiliar to me and easily guessed but, perhaps, not that useful unless one happens to find oneself embroiled in an adventure looking for gold ingots from a shipwreck, for which I live in hope!

The real value to the language learner, however, is different. Reading Le Club des Cinq has enabled me to read French without translating as I go. What I mean is that because I know the stories well and because the language is simple I just read and understand without thinking. I know what is going to happen and it is somehow ‘there’ in my head and I can read pretty much as I would in English. It’s true that when I come across particular words or constructions I have to stop and translate in my head. But by and large I can read just as I read (in English) when I was a child, and can just ‘soak up’ the language as I go. I’ve been mainly reading the books on the train to work, and have noticed that afterwards I find myself thinking in French: it sinks in, somehow.

There’s another bonus, too, and a quite unexpected one. Whereas the familiarity of the books helps my French, reading them in French somehow makes them unfamiliar. Thus reading the Famous Five in French is strangely like reading them for the first time. It is like being in a time machine. So as I sit on the train, a middle-aged man, reading Le Club des Cinq I am almost like the ten year old boy I was when I first read The Famous Five. When I re-read The Famous Five in English I feel a cosy nostalgia; when I read Le Club des Cinq I feel the excitement of when I first read them. 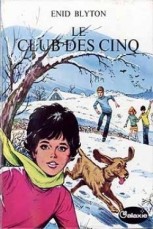 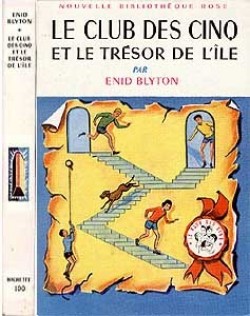 There seem to be nearly as many French covers as there are English ones, you can see a great selection at the French site Book Node (which as far as I can tell seems to be a bit like Goodreads but without the ratings) – Fiona

5 Responses to Learning French with The Famous Five by Chris