As promised I got out my fuzzy felt set and took plenty of pictures for you. On trying to make the suggested pictures I discovered there were actually quite a lot of missing pieces but mostly just the narrow strips which I can easily cut out of felt myself. Everything is in fairly good condition apart from a few folds or creases on the pieces, and the board cleaned up of fluff easily with gentle application of some sticky tape.

So here’s the set itself:

On the side it says it was made by Allan Industries LTD and is copyrighted 1959 by Noddy Subsidiary Rights Co LTD. And on the bottom, I learned it once belonged to someone called Eric.

Inside though, on the back of what I can only describe as an instruction sheet, there is a list of other Allan Industries fuzzy felt sets and that’s dated 1963. I’m guessing the set dates from the mid 60s then which is fine, I’m perfectly happy with that and it means it’s still around fifty years old.

The instruction sheet gives you plenty of idea as to what you could make using the set and I gave it my best shot but was lacking so many of the plain shapes I didn’t get very far. It’s hard to tell how many pieces there are meant to be as of course you couldn’t expect to make all of what’s on that sheet at once. 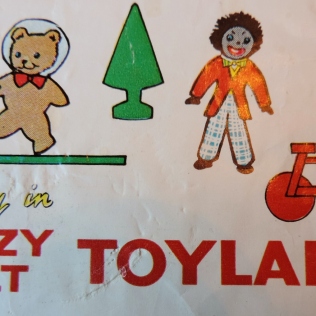 All the characters were present, though. The doll is wearing a different colour to what’s on the sheet (and she’s in another colour on the box) but apart from that it’s all the same.

The other pieces I did get were:

Various shapes, not all of which seem to belong to the set.

Again, I’m sure the black pieces aren’t original to the set.

Here’s what I did manage to make:

Sailor Doll in trouble with the law 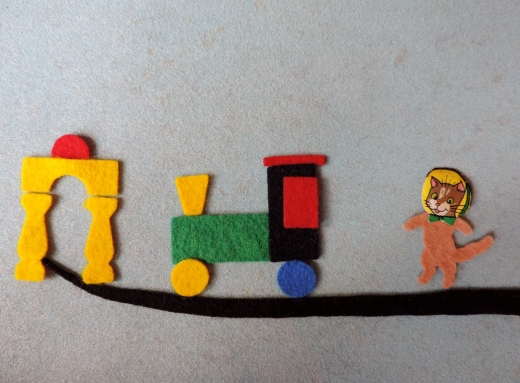 A train engine with no carriages

Teddy working on Noddy’s slightly altered house without a ladder

And a Fiona original – the Noddy party mansion

I realise I forgot to include the dog in the earlier pictures of what the set included but as a bonus here’s the dog and Mr Plod pretending to be Mr Goon and Buster. 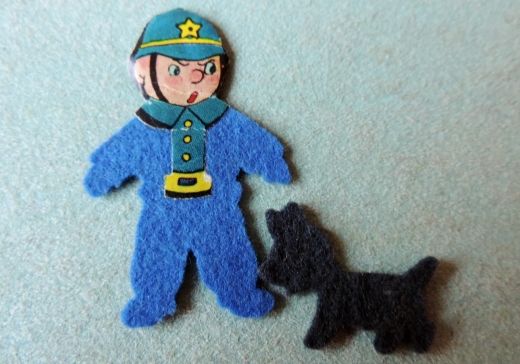 Anyway, it’s a lovely set and it was an absolute bargain as I got it for less than £5. My next project is to find some felt and cut lots of straight strips, triangles and circles, so I can attempt the bike, the full train and the furniture.