Another two parter from series two, and we’re back to splitting the episodes again because I couldn’t find a block of 50 minutes to watch the two back to back (this week has been crazy busy) but I’ll walk you through part one, and we’ll do part two next week.

Five Go to Billycock Hill is not one of my favourite books and neither is it one of my favourite adaptations. The execution of the story is quite sloppy over all I feel, but again this is what keeps cropping up, but I do think it was because I wasn’t a child any more when I watched it. At this point in the filming I feel that the script was becoming too much like Five Go Mad in Dorset (the Comic Stripspoof), and the cast perhaps seem too old.

When they came to the second series filmed in 1996, certainly Marco and possibly Paul as well looked too old and it was hardly surprising as Gary Russell remarked when he went to the press launch of the second series that both were drinking pints of beer! – Tony Summerfield. (The thread can be found here.)

The cast were clearly out growing their roles and the never ageing Five that Blyton envisaged all those years ago when she wrote them was never to be. In fact if you look further down on the thread from the Enid Blyton Society, you can see that all the screening dates for the episodes have been listed and Billycock Hill was shown last. This doesn’t mean that it was filmed last but if they knew it was to be screened last they may have made the characters more grown up as a sign of them leaving childhood behind.

Anyway, on to the story. There is one major change that needs to be noted in this part of the episode and this would be that Uncle Quentin is advising on the planes on the airfield that plays such a significant part of the story. As a general rule he is fairly inconsequential  in the episode so including him seems a bit pointless, but he’s there and working on the planes with Toby’s cousin Jeff.

Speaking of which, Toby Thomas is a bit wet really, maybe a bit young to be a school chum of Dick’s but not a bad performance over all. I always imagined Toby however to have dark hair, not blond. That’s just me nitpicking, mind. We also don’t have young Benny and his runaway piglet Curly. Again not a necessary part of the story until the very end, but definitely brings some much needed lightness to the book.

We go through a few funny parts really, including the meeting of Mr Gringle the butterfly man who is only interested in moths and butterflies, and Dick falling into the only swimming pool for miles after being surprised by an air force guard.

When the highly handsome Cousin Jeff arrives after the swimming pool incident to reprimand Toby for taking his friends there without permission, we see a new side to George; the love struck teenage girl with her first crush. This makes her perfect to tease by Dick who takes every chance to tease his cousin on how she was talking to Jeff, especially telling the dashing pilot that she was actually a girl and not a boy, and letting him call her Georgina. Poor George. She can’t win can she? I mean Dick teases her when she’s all fierce about being a boy and then when she’s trying to be a girl. Well let’s just hope George saw the funny side.

I can’t help but say, I don’t like this episode. The most cringe-worthy bit is when, on their first morning at camp, Julian tries to make them all do star jump exercises before breakfast. I can’t watch that scene it just makes me cringe so much. Ironically around the time this would have been set in, plus the ages of the boys, they would have been getting ready to go off and do their national service, and its possible (though I don’t know) that this was how boys at boarding school started their mornings! Either way I always fast forward that bit because it just seems so out of character to me.  What to you all think? Is this episode really as bad as I think? Or am I just jaded because I watched it first through adult eyes not children’s? Let me know before part two next week; it will be interesting to find out what everyone else thinks! 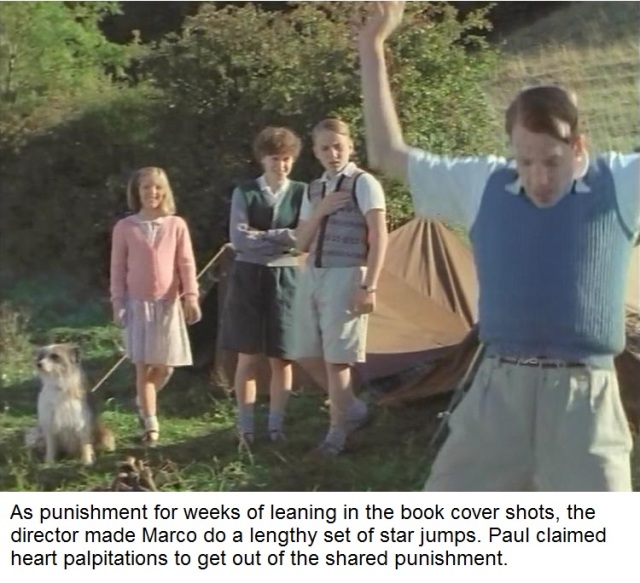