Noddy at the V&A Museum of Childhood

Two weeks ago on my trip to London, I visited the Victoria and Albert Museum of Childhood at Bethnal Green. I had hoped to see one or two Blyton-related items, and I was not disappointed.

The first thing I found was a double jack-in-the-box toy, in the moving toys gallery. It has Noddy and Big Ears as the jacks.

According to their website it was made around 1960, by Lyons. There isn’t a traditional handle on this, instead there are two catches on the front. The red oval reads press down catches one and two, up pops Noddy – Big Ears too.

Also amongst the moving toys was a Noddy friction car.

Then I spotted a 1961 Noddy kaleidoscope in what is called the ‘look see’ gallery. 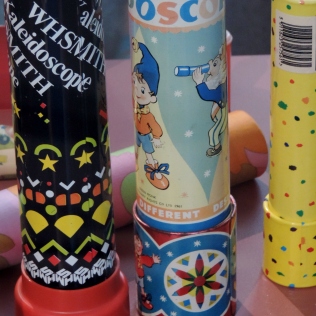 In amongst the soft toys and dolls was another Noddy.

This soft toy doll is by Merrythought in the 1960s.

I couldn’t get a good picture of the next Noddy toy I spotted, as it was in between other items, but there is a boxed Stick Picks game.

Another game I saw was Little Noddy’s Train Game.

The only non-Noddy Blyton item was this jigsaw:

It didn’t have any information beside it in the display, but you can’t fail to recognise it as Eileen Soper’s work. The museum clearly haven’t read anything illustrated by Eileen Soper, as they have this in their archive, with artist unknown!

On browsing the museum archives, they have a lot more Blyton items than they have out. There are cards, posters, books, games, jigsaws and more. 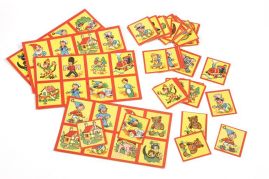 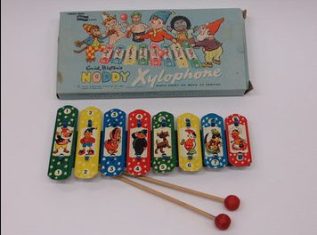 If you’re ever in London, I would definitely recommend the Museum of Childhood. It’s free and it will give you at least a couple of hours of fun as you recognise your  childhood favourites and spot some weird and wonderful items you weren’t lucky enough to have.

This entry was posted in Personal Experiences, Toys and Games and tagged Merchandise, Museum of Childhood, Noddy, Toys, V&A. Bookmark the permalink.

4 Responses to Noddy at the V&A Museum of Childhood