The Adventure Series on TV – The Sea of Adventure

I think that Valley of Adventure has to be the strongest episode of this series so far (and far better than anything from The Secret Series had to offer). I really hope the series can stay on form at this point and that Sea isn’t a disappointment.

This introduces us to who I assume are our gun-runners. They seem to have a more high-tech set up though, with a shark tank and fully kitted divers who react to alarms to retrieve crates from the sea.

HOLIDAYS ARE SUPPOSED TO BE RELAXING, AREN’T THEY?

Allie, Bill and the children have arrived at Wellington Airport as Allie has business in Wellington with a new exhibition of Maori art. They are collected by a friend and former trainee of Bill’s – Dennis. There’s someone taking photos of the family too. Bill insists he is just on holiday from the British Secret Service, but Dennis tells him that an agent has gone missing in the area recently.

The hotel’s main feature, besides having a pool, is that it seems full of people who want Bill to disappear. His room gets bugged and our chaps from the opening scene certainly aren’t happy about his being in the area.

Philip’s interest in animals gets a brief mention – he wants to explore the hotel grounds to find insects. Dinah warns him not to bring any back inside and they argue for a moment before Aunt Allie tells Dinah that Philip is just trying to wind her up.

That night the two boys see a long-haired man with a rifle who seems to be following Bill. Rushing out in their dressing-gowns they manage to wrestle him to the ground. It turns out, however, that the long-haired man is Horace Tipperlong and it’s not a rifle but a long-range microphone to record bird-sound. So in this way the children make an enemy of Horace very early on.

I’d believe this was a rifle, wouldn’t you?

Dennis takes Bill and the children on a drive to visit a bird sanctuary (and they have a Maori sing along on the way) but someone with a real rifle shoots out one of the tires. The car goes off the road, down a grassy slope and ends up near the the water’s edge. Bill cracks his head on the windscreen but otherwise everyone’s ok, then Horace nearly adds two casualties to the list when he refuses to stop his car for the boys.

THE ADVENTURE REACHES THE SEA

Bill, aware that a few funny things are going on, decides to take a nice, safe boat trip to get out of the way. The kids ask to go along and Bill agrees, telling them they can go and see penguins on one of the islands. Unfortunately he has discussed these plans with his boss over the phone, and everything has been overheard. The only thing they don’t know is that he has the children going with him.

A dead body has been washed up on a nearby beach and so Bill gets called away to do something about it. He keeps insisting that he’s only on holiday and not working, though. He also says he wants to share information with Dennis, to help, but isn’t sure what he can say. Dennis must be from a New Zealand intelligence agency otherwise he would answer to  the same people as Bill, which throws the comment about him being Bill’s trainee into question. Anyway, Allie takes the kids to the boat and leaves them on their own until Bill arrives at night, while they’re in their bunks. I think that’s all just a ploy so that when the enemies follow Bill to the Lucky Star they don’t realise he has company.

Interestingly, Philip says that Bill will have to learn to deal with their nonsense if he’s to be our dad. So clearly things are more series at this point, despite the proposal not occurring until Ship in the books. The kids all call him Uncle Bill, too. Which is a bit strange, as Blyton usually went for politeness in children yet in the books they just call him Bill. I suppose they were as equals there, having shared adventures and rescued each other.

The Lucky Star has had quite an upgrade since the book as well. It now has a full kitchen, comfortable bunks and carpets! Bill goes for a snooze and leaves the children to navigate, and following his directions they land up exactly in the ‘drop zone’. Jack sees something being dropped from a plane, while the enemies get highly suspicious of Bill’s presence. 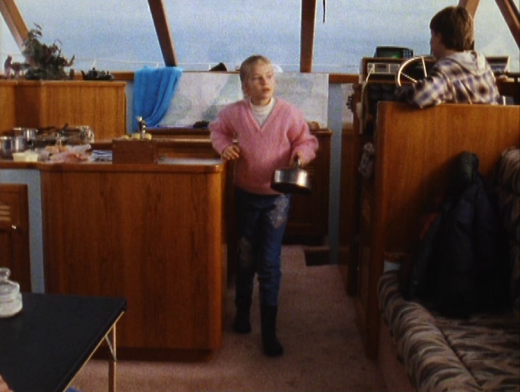 They get to the island without incident, though. It is supposedly uninhabited (except for the penguins) but they do spot some rubbish there. They don’t actually find any penguins, though. I’m guessing this was for budgetary reasons, but Henguin and Penguin didn’t have the same ring anyway.

Bill goes off to his boat to fish for their dinner (instead of tinkering with the radio) and a diver climbs aboard and kidnaps him. For the second time some unknown person with a spear is watching. (I just hope it’s not a crazy monk.)

A STORM, A STRANGER AND AND OLD “FRIEND”

A storm blows up and by now the children have realised that something has happened to Bill. They are huddled in one tent and, as in the book the spare tent gets blown away. But then we diverge from the text again. Instead of the second tent being dramatically ripped from over them (which, granted, would be hard in a modern all-in-one tent!) it sort of half-heartedly collapses. Then, instead of finding shelter accidentally in a puffin, er, penguin burrow (do penguins make burrows?) they instead go into a handy shack. Yeah, a shack on an “uninhabited” island.

The uninhabited shack on the uninhabited island is in fact inhabited by our spear-holding stranger. He is a Maori chap who is concerned by the lack of penguins. So he welcomes the children and they have a sing-along. Why is there always singing??

A boat then approaches and their new friend warns them all to hide. Jack is not with the others though, he’s peering into rock-pools. He notices that it’s Bill’s boat, but without Bill at the helm. The children hide (pretty terribly) in the shack but are not found because the men figure that the Maori man is just angry they are on his property and skedaddle.

When Tipperlong turns up the children plan to steal his boat. This comes across as rather more blood-thirsty than in the book, though at this point they do still suspect him as having something to do with trying to harm Bill. They get the boat without any violence (or threats of) but their own signal-fire brings the enemies to the island too.

Meanwhile, Allie hires a helicopter. “But we don’t know where they are,” Dennis says. “That’s why we’re looking,” Allie fires back. Touche.

And then we’re back on track with the book somewhat. The baddies mistake Horace for one of Bill’s men and kidnap him too. The children feel it’s too far to the mainland (more convincing in the book again) and decide to rescue Bill themselves, fuelled only on the many cans of beans Horace has in his boat’s cabin.

They’re able to follow the enemy to another island, one with buildings and electric fences on it. There are several sheep jokes – the sheep are setting off the alarms, that there will be lamb for tea if that’s the case. And the children hide amongst the sheep. Yes, four children in brightly coloured cagoules completely disappear in between half a dozen sheep in the middle of a field not ten feet from the enemy.

Four children and a bird are hiding in amongst the sheep.

This was the point where I inevitably tuned out for a while, but from what I gather it was a filler ten minutes of distractions (including the girls singing) in order to rescue Bill.

They get chased by another boat and Horace nearly lights a stick of dynamite instead of a distress flare, and Bill gets a great idea. He empties out the powder and throws the empty lit stick onto the enemies’ boat. Obviously he couldn’t kill anyone, this is a children’s show after all, but it does trick them into jumping overboard.

This was not as good as Valley. But it wasn’t as bad as Wood (nothing could be as bad as Wood). It is more on a par with Island. So it wasn’t great, but it wasn’t terrible either. I fail to understand why they had to add a new character on the island. It was really unnecessary, as it always has been! And the lack of puffins (or penguins) was a real shame.