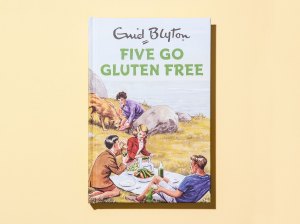 A sneaky purchase after Christmas because I was blessed with one of these spoofs at Christmas time. I didn’t have much choice of book as Five Give Up the Booze and Five Go on a Strategy Away Day were both sold out. However, I ended up with Five go Parenting and Five Go Gluten Free. Shall we see how Gluten Free compares to Brexit?

How it all starts

We join the Five on a picnic for Anne’s birthday and the others are just about to hand over their presents to the birthday girl. Julian gets her a spa weekend, Dick a healthy lifestyle cookbook – containing the recipes and benefits about being gluten free, and George buys the super modern Anne (who does Bikram Yoga!) a spiralizer.

On the way home Anne reads her new cookbook and decides that the Five are putting lots of toxins and things into their body with things such as gluten and she wants them to have a go at this toxin-free diet in her book. Part of the reason they agree to this is because Anne seems to be the only one who knows her way around the kitchen. As she tries to keep the Five on the straight and narrow, they find themselves growing ever more hungry, grumpy and low on energy, and morale starts to crumble. All we need to know is; can the Five stick to the diet?

As Anne struggles to keep the Five on the diet, she is also wrestling with her own convictions about the diet and meditates to help herself with the struggle of the ‘detox’ but she powers on. In fact she starts managing the Five in a manner that is reminiscent of my weight loss coach telling me to identify trigger times and plan! She tells the others that they have to think about things they can do instead of eating cake or drinking too much. The boys for example have a friend’s birthday coming up and Anne knows that if they drink too much they will end up eating ‘bad’ foods and tries to come up with a solution for them, i.e not drinking that much.

Needless to say it fails when the boys end up drinking too much, George ends up snacking on her workmate’s cakes and Anne stuffs a packet of Wotsits in her mouth. Anne decides that they need to be out of the city where they are living and away from temptation. They head down to Kirrin (which we are assured is in Dorset – I’m glad someone apart from Blyton managed to clear that one up!)

Unfortunately going down to Kirrin isn’t the best idea as a very technically challenged Aunt Fanny hasn’t been on her computer to read her daughter’s email about the new gluten-free diet and has baked numerous cakes, biscuits, and gluten-filled items that they shouldn’t be eating. They can’t even escape to the relative safety of Kirrin Island because a specific kind of vole lives there now. Timmy would definitely be after chasing them, so they can’t go there to get away from the terrible things they were putting in their bodies.

Anyway towards the end of the book, Anne admits she may not have been completely right about the non gluten diet and sees how miserable it’s making her cousin and brothers. She agrees that they can go back to their usual diet, even though shes disappointed at the fact her experiment hadn’t worked. Though I think this should give the others enough of a shove to get in the kitchen and not expect Anne to do all the cooking in the future. That is, if they don’t want to be on another diet.

Much much much better written and thought out than Five on Brexit Island, perhaps because there was more time in fact to think and plan a story. On discussion with a friend, she agreed with me that Brexit Island was written to suit the feeling of the UK just after the historic vote on the 23rd June 2016.

Gluten Free does feel very tongue in cheek about the fad of being gluten free just because it’s seen as a good thing to be dietary wise, instead of as a result of a serious illness. As shown in the book, it is hard to maintain especially when you have no real reason to be gluten free.

A few bits could have done with a little change, mostly to go against the Blyton stereotypes; such as Anne getting the run of the kitchen, and all the cooking stuff for her birthday. I’m not saying that it wouldn’t have worked so well with someone else being the main character this time around, but it would have nice to maybe have seen one of the boys in charge of the kitchen and on a health kick or something. I’m just saying. Vincent missed out on a trick there to really turn the Blyton world on its head.

We also have the hilarity of political correctness gone mad; throughout the book Anne is constantly told not to call Julian “Ju” as it sounds wrong in today’s multi-cultural society so Dick and George are trying to convince Anne to call him Julian or “Jules” (I hate Jules.) When she accidentally calls him “Ju” in front of a group of school children the Five find themselves running, potentially for their lives,  away from the school in case they have offended anyone. Its an interesting twist and could have been an interesting novel in its own right. I wonder if Bruno Vincent will think of bringing it out next time, “The Five get caught by Political Correctness” sort of thing!

Anyway, I enjoyed this one more than Brexit and its made me curiously optimistic for Five Go Parenting.  This is one I would definitely recommend reading!

Have you read it? What do you think?