Those Dreadful Children: who was really the most dreadful?

THE STORY IN SHORT

The Carletons, John, Margery and Annette are polite, well-dressed children with a polite well-dressed, if rather fussy, mother. The Taggertys, with four children – Pat, Maureen, Biddy and baby Michael – then move in to the house behind theirs, so their gardens meet at the bottom.

Initially the Carletons are excited to have someone new to play with, but soon find that the Taggertys are not to their taste. They are loud, rough, rude and dirty. The Taggertys, though, think the Carletons are stuck up cry babies and both sets of children vow to have nothing to do with each other. 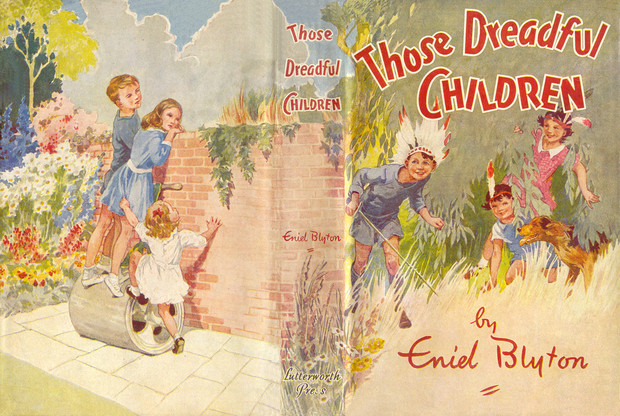 The neat, tidy Carletons on the left and the wild Taggertys on the right

This is a fine plan until their fathers come home to announce they have met an old school friend, and he has some fine children. And would you believe it? They live in the house at the bottom of the garden…

The children are then forced to see each other. Over time they get to rather like each other, despite their perceived faults. Both sets of parents are pleased at the little changes the children go through, as a result of these friendships.

Both sets do improve, but it takes a few disasters before the Taggertys truly buck up.

I definitely identified more with the Carletons when I was younger.

John is a quiet boy who doesn’t mind being as neat and tidy as his mother demands. He’d rather stay in and read a book than go tree climbing or on long walks with his father. His father wishes he was more of a ‘real boy’, 1950s gender divides clearly well established in his mind, but his mother puts being clean and tidy above most other things so she’s quite happy he’s not going out and getting muddy. His main character flaw is that he holds grudges. If his sister does something that he considers to be beyond the pale, he will tell her and then not speak to her for days.

Margery is much like her brother in that she is happy to play nice, quiet games. There isn’t as much to say about her, other than she is quite a nurturing soul and likes sweet little animals and babies. She isn’t perhaps as well-rounded or fleshed-out as John is. She does have a ‘character flaw’ though, in that she is terrified of most creatures like mice, bats and even cats and dogs.

Annette is the youngest, not yet at school. She is probably the most objectionable of the Carletons. She is rather vain, good at making her face look sweet to make sure she gets what she wants, and likes to preen and be told how pretty she is. She’s also a dreadful tattle-tale and goes running to Mummy at every opportunity, usually in floods of tears because someone wouldn’t play with her or she couldn’t find them during hide-and-seek. 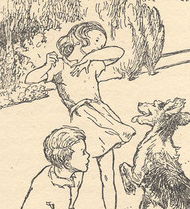 I can see that the Carletons are not perfect. They are probably missing out on quite a lot by kow-towing so eagerly to their mother’s wishes. In a modern setting, there’s little wrong with John. His grudge-holding is probably unpleasant but something he may grow out of in time. Margery’s fears are the product of growing up without pets or access to animals I bet. I was pretty scared of dogs when I was her age as we’d never had one, and few friends or relatives did either. I did have hamsters, though, so I wasn’t afraid of all pets. Annette, as I said, can be pretty unpleasant. But at four she has plenty of time to grow up – though I suspect her older brother and sister wouldn’t ‘squash’ it out of her like other Blyton characters would. I suppose their other flaw is they, along with her mother, are quite quick to turn up their noses at people and things. They do judge people a bit, if they are not as tidy or well-mannered and the children are only allowed to play with the Fitzgeralds (no-one else comes up to their mothers’ standards) who they call stuck-up. I wonder how truly Dreadful the Fitzgeralds are!

The Carletons are, however, very honest children, who never tell lies, cheat or disobey their parents (honestly.) They are helpful around the home and each looks after his or her younger sibling without complaint. It does seem a little unnatural at times, but some children are just extremely well-behaved.

Pat, the oldest, is very much the leader of the children. He does try to keep them in check (sometimes) but his way of doing that is to bellow and slap. He’ll run around all day playing yet won’t lift a finger to do an errand for his mother, nor does he believe in working hard at school.

Maureen will also deal out a slap if one of her siblings rubs her the wrong way. She’s not as aggressive as her brother, but she’s about as lazy and won’t help with the baby or do any chores.

Biddy, ages with Annette is very good at hiding should her mother, or Bridget the home help, want her to tidy her own room. She’ll also lash out and squash any behaviour she doesn’t like in others.

Michael is the baby, I would guess he is around a year old perhaps. He seems to spend all his time in a cot or his pram except when he is being fed, but that’s possibly normal for the era. He doesn’t say or do much, but requires being cared for and peace to sleep, which add a bone of contention around the house.

There is also Dopey, the Taggertys mad dog. He’s not a bad dog at all, just very excitable and often getting into trouble.

The Taggertys aren’t all bad, though. They are certainly active and healthy, and no doubt very loyal to their own (as long as loyalty doesn’t mean making the beds or tidying up the tea-things). They are very much free spirits who have been left to do what they want for a very long time, and so you can see why suddenly changing that would be hard. Their mother has been ill a lot, which is why the parenting has slid. And of course father, in the 1950s, wouldn’t be doing a lot of parenting (or housework) anyway. Both parents admit to being rather lax, doing things for an easy life.

I think you can feel sorry for both sets of children as they are absolutely products of their parents method of upbringing. The Carletons have never been allowed to be daft, care-free children while the Taggertys have not have enough rules or boundaries in place. You also get the impression that they have been brought up with far less money. They are excited to have a large garden because they’ve only had small ones before, and it’s said that their father is a writer. I wonder if he has not been that successful a writer in the past and so some of the grubbiness and so on is due to lack of money before. (I doubt they were living in poverty, mind you.) They’ve also had to contend with a mother who couldn’t be “there” for them as much as they’d like because she has been ill. They haven’t been able to ask for her help with homework, and presumably they have gone without costumes for parties and so on as well. I can’t see them having done a lot of work around the home, though, which would be the default for a lot of children with a sick parent. Still, they can’t have had it entirely easy.

Neither sets of children are truly set up for facing adult life and have some hard lessons to learn. Annette will have to learn she can’t just cry and tell tales to get her own way and Biddy will have to learn that she can’t hide from all her responsibilities or smack other people when she doesn’t like what they’re doing.

Both have their own strengths, still. A Taggerty would rush to your aid regardless of the danger, while a Carleton would hang back and worry about getting into trouble for trespassing or tearing his/her jersey on a fence, but it would be a Carleton who would bring his you groceries when you were ill and be much more thoughtful over little, every day things.

And I have to stop for now, as I have written so much already! I will answer the question who was really the most dreadful next time, though I am already leaning towards the Taggertys.

What are your thoughts?

Next post: Those Dreadful Children: Who was really the most dreadful? part 2

This entry was posted in Characters and tagged Behaviour, Parenting, Those Dreadful Children. Bookmark the permalink.

4 Responses to Those Dreadful Children: who was really the most dreadful?