Who’s Who in Enid Blyton by Eva Rice, revisited

Some of you may remember that I have previously reviewed the original version of the Who’s Who book (it took three posts – Adventure Stories, School Stories, and Toys and Enchantment. You also may remember that I pretty much ripped it apart as it was riddled with errors and incredibly inconsistent. I am clearly a glutton for punishment, however, as here I am with the updated edition to see if it is any better. I have been reliably informed that previous mistakes have unfortunately not been corrected, so I just hope the new additions are worth having published a new version. 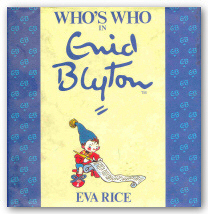 This has been updated to reflect the fact it is a revised edition – and it says that the book has been expanded to include The Barney Mysteries and the Farm books. I don’t know which books the Farm books refer to as there are quite a few, but we shall see! In slightly different words it still states that it does not claim to cover every character which is just as well.

The first section is still adventure books – and The Put-Em-Rights is still wrongly included. Interestingly, despite the list being changed from lowercase text to uppercase and an added illustration at the bottom of the page they have failed to include The Barney Mysteries to the list at the start of this chapter (it is there in the contents page at the start though).

This is a fairly good section, and it was definitely worth adding – it’s clear that Eva Rice has either read the books or done a decent amount of research here. There are very few characters I can see as missing – but I myself am not sure if they are ever given a name in the book and so their omission is quite reasonable (off the top of my head I came up with the woman in charge of Ring O Bells hall, the men – particularly the leader – from the underground portion of Rockingdown and a few shop keepers from different books.

There are however, two mistakes. One is using the name Sardine for the Lynton’s cat without mentioning she was originally called Snoek. The other is worse! In the opening description it tells us that the children are often looked after by Miss Hannah Pepper. This is incorrect. They are looked after by Rebecca Pepper, and her sister Hannah runs the guest house they stay at in Ring O Bells. Strangely they get them the right way round when they get their own sections later.

The introduction to this section does a lot of comparing these books to the Six Cousins books, which is fine but as the reader hasn’t yet read the Six Cousins section it doesn’t necessarily make the most sense.

Likewise, some of the descriptive sections don’t make sense. Several donkeys are named individually (fine) but all but one read ‘see Hee-Haw’. A couple of them come first alphabetically and one afterwards. Hee-Haw’s section simply states which donkey belonged to which child so I can’t see why the section for each donkey couldn’t include that piece of information rather than referring the reader to another one. It also makes no sense to pick Hee-Haw as the one referred to being in the middle of the list.

This happens again with Hoppity and Jumpity. Hoppity’s section just reads see Jumpity. It would have made more sense to have it the other way around so that anyone reading it in order would know they didn’t have to go back.

The children’s father, for some reason, appears in two sections named as Father and John.

Apart from those niggles the Farm section is decent, many animals are included but they are quite important to the story.

The only problem I can see in the Six Cousins part is a few instances of very lazy, choppy sentences. I hesitate to even call them sentences in fact. Hazel the shepherd gets two proper sentences about him, followed by Has twinkling eyes. Old. Did Eva Rice forget to turn jotted notes into coherent sentences? Why could his age and eyes be worked into the earlier lines?

Otherwise, again, this is a good section and well worth having been added. Some good character analysis is given and examples from the books are well used.

I think it is fair to say that this is a revised book as there are two significant sections added  but it is not quite right to call it fully revised as the majority is remains untouched. They have, however, changed the illustrations. There are not more, I don’t think, but they are given half- and even full page prominence instead of being squashed into the margins as vignettes. They make use of some newer illustrations mixed in with the old as well.

It’s just a real shame that the original problems – major omissions and errors – are simply reprinted. For example, the Adventure Series has only the main cast, Bill, Uncle Jocelyn, Gus and Jake listed. I still can’t get over the fact it ignores Mrs Mannering. And possibly worse – the Secret Series is missed out entirely!

This entry was posted in Other Authors and tagged Eva Rice, Six Cousins, The Barney Mysteries, The Farm Series, Who's Who in Enid Blyton. Bookmark the permalink.

2 Responses to Who’s Who in Enid Blyton by Eva Rice, revisited