A completely un-confusing guide to names in Blyton’s books

Enid Blyton must have come up with thousands of characters in her years of writing. Some of them are instantly memorable from their name alone.

Zerelda? That can only be Zerelda Brass, the American girl from Third Year at Malory Towers.

Anne? Well, I’m probably talking about Anne Kirrin, though there might well be some minor characters also with the common name of Anne.

But what if I said Sally?

You might think  that’s obvious, Sally Hope from Malory Towers. But equally I might be talking about Sally Wilson, leader of the Put-Em-Rights. Or I may even have meant Sally the Poodle, who belongs to Berta Wright from Five Have Plenty of Fun.

Jack has to the the most common name in Enid Blyton’s books – for major characters anyway.

Jack is a main character in three major series no less.

There is red-haired and freckled Jack Trent in the Adventure Series, Jack-no-surname who is a member of the Secret Seven, who is not to be confused with Jack-previously-no-surname but now Jack Arnold from the Secret Series. Jack Longfield is also a main character in the Six Cousins books, and there’s a Jack in the Happy House Children series. And while we are being catagorically un-confused, we’ve also got a Scottish Jack, Jock Robbins who appears in Five Go Off to Camp.

After the Jacks, we have the Jakes. Jakes are not main characters, but they are all villains. There is Jake-with-the-eyepatch from The Island of Adventure who is entirely different from Jake-the-Gypsy from Five Fall Into Adventure, and neither have anything to do with another Jake from the Famous Five, Jake-the-main-villain from Five on Treasure Island. 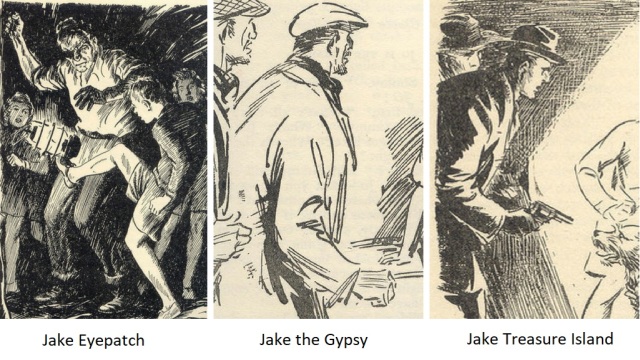 Also appearing with the Jake-the-gypsy is one of our Jos. This one is Ragamuffin Jo, presumably short for Josephine but also known as Jo the Gypsy girl. We also have Josephine ‘Jo’ Jones, a first-former from Malory Towers, not to be confused with a boy called Jo who is in the Faraway Tree Series. Neither should you confuse any of those Jos with Jo-Jo, the servant and criminal from The Island of Adventure. 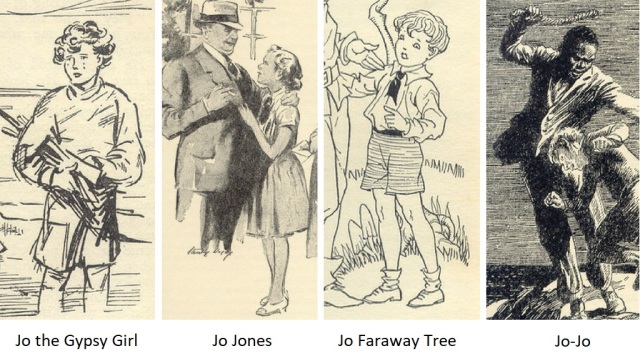 Blyton wrote quite a few Welsh characters into her books, but she used the same names quite a few times for them!

There’s another ragamuffin in the aptly named Ragmuffin Mystery, the last book of the Barney Mysteries. This time the ragamuffin’s name is Dai, which also happens to be the name of a dog in Five Get into a Fix.

Just in case that wasn’t clear, there’s a chart below.

And of course we’ve already had Jo Jones (not Welsh) above, and there’s also another Thomas family in Five Go to Billycock Hill.

All purveyors of historical stories there are three grandads you might muddle up. Yan’s Old Grandad is a shepherd in Five Go Down to the Sea, and shouldn’t be confused with Hugh Dourley, also known as Old Grandad, from The Ring O Bell’s Mystery. Also old but called Great-Grandad, the eldest member of the Philpot family appears in Five on Finniston Farm.

Next time: I clear up confusion around Harrys, Henrys, people who sound like they are in the Famous Five but are not and more.