The Secret Island – an audio review

A while back I noticed that Audible were now doing both The Secret Series and The Adventure Series in audiobook. I’m a member and get one book a month for about £8, so I got both The Secret Island and The Island of Adventure to try them out.

I checked which I had read most recently and that happened to be The Island of Adventure, so I decided to listen to The Secret Island. It has been four years since I last read it and when I did, it was for my text comparison for updates.

THE SECRET ISLAND IN SHORT

It’s difficult to review an audiobook purely on the sound of it, as it turns out to be a very short review that way! So I will recap the story here for anyone who isn’t familiar with it.

Twins Mike and Nora, and their older sister Peggy, live with a cruel aunt and uncle as their parents have been lost in a plane crash. Nearby Jack lives with his old granddad. All the children work hard around their homes, and are treated very badly.

They decide to run away, to an island on a lake. They pack up as many supplies as they can and go off together.

On the island they make a house out of willow, start a little farm with chickens and a cow, grow some crops and become pretty self-sufficient.

There are a few scares, trippers come to the island, and then some men looking for the children. Jack is almost caught on the mainland when he goes to sell berries to the buy some other goods.

Then, just before Christmas he goes to a town to get some gifts for the other children and hears something that makes him abandon his shopping and rush to the nearest hotel. From there he brings two rather special and important people over to the island… 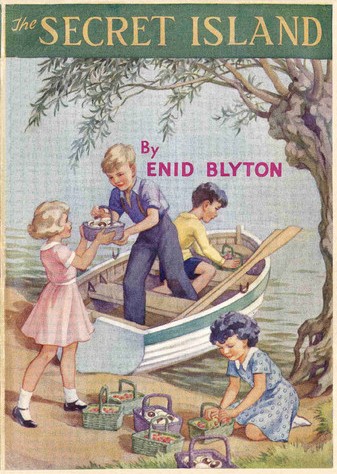 The Secret Island is narrated by Joshua Higgot. His voice seemed really familiar to me, but the only things I can find on him is that he’s narrated some other Enid Blyton books on Audible, and I’ve never listened to them. He must just have one of those voices that sounds like someone else. You can listen to a short sample here, if you do, and you can think of who Joshua Higgot sounds like them please tell me!

His narrating of the main text is good, he has a pleasant voice that is easy to listen to. Some narrators read so slowly that I end up listening on 1.25 speed otherwise I get bored and irritated waiting for   them     to     finish     a     sentence, but Higgot has a good pace. I did end up switching to 1.25 speed halfway through though, but only to listen faster for this review (though the book is only just over four hours long).

Higgot does a good job of creating tension when the men are searching the island, and he does differentiate between the different characters by putting on different voices – he gives Jack a good bossy tone especially. He gamely attempts to do some bird sounds as Blyton is fond of describing owls twit-twooing and yellow hammers saying little-bit-of-bread-and-no-cheese, and generally does well at doing voices when the person is yawning or laughing.

The only ‘problem’ is that his female voices are a bit rubbish. I know it’s not always easy for a man to do the voice of a female, especially a child, but I’ve spend hundreds of hours listening to Stephen Fry voice Hermione, Professor McGonagall, Molly Weasley, Tonks and other women with skill. They aren’t the girliest of voices but they sound natural. Higgot is OK if the girl or woman is talking calmly but as soon as they get upset or angry their voices become quite silly and overdone which makes it hard to take them seriously.

A NOTE ON THE SCRIPT

As far as I can tell the version they are using is the same as the Award impression from 2009. Most of the references to slapping have been removed and replaced with yelling and so on, but Mike is still shaken so hard he can’t stand up.

It’s harder with listening to work out what’s changed, I think. With a book you can pause and think much more easily. The updates probably have less effect in audio form for that reason. It’s different listening to an unfamiliar voice instead of the little voice inside your own head that you heard when you read, and that can distract from all the little details.

I did notice that they hoped for £1 per basket sold, though. I mentioned in in part 5 of my text comparison that updating the currency but not the technology seemed silly. On my way to work while listening this morning I had a new thought. Perhaps today’s children don’t realise that by selling the baskets for £1 they are placing the books in more recent times. I don’t just mean post-decimalisation, of course you could gets pounds well before then but only in note form. £1 for a punnet of strawberries would be ridiculous before 1971, and probably long after too! In the mid 70s you could get a pint of milk for 7p while today it’s around 50p.

Before ramble any further – my point is that making a box of strawberries worth £1 but having the books set in a time where batteries, torches and compulsory schooling were uncommon suggests children don’t have a clue that prices have changed over time or that before 1970 we used a different system. To them it may not seem anomalous to have modern(ish) pricing and an otherwise 1940s setting, and that’s sad.

My second thought was about Jack selling 27 baskets for £27. Then buying scores of candles, matches, black cotton, wool, corn for the hens, a bar of soap, three books, two pencils, a rubber, a drawing book, a kettle, two enamel plates, two bars of chocolate, a bag of sugar, flour, rice, cocoa, nails and two blankets plus whatever else brought his list up to 21 items.

Even if you allow for things being a bit cheaper in around 2010, you would struggle to get all that for £27. Even if a lot of it came from a pound store you would struggle to get any decent quantities of flour, rice, corn and so on as well as a kettle and a blanket. In the original they plan to sell the baskets for sixpence, so they’d have 13 shillings and sixpence. I really don’t know how much that would have bought but I’ve done a little research… you could get 1.5 kilos of flour for just 3p (though that equals £1.85 today, about 3x what it actually costs) and 1 kilo of sugar for 2p, so their 13 shillings and sixpence (162p) looks like it would go quite far.

I won’t bore you with the rates of inflation or any further financial things now.

I’ll just say it was nice to listen to a familiar story but I think I enjoy my old hardback with illustrations better.

This entry was posted in Audio Books and Audio Dramatisations and tagged The Secret Island, The Secret Series. Bookmark the permalink.

4 Responses to The Secret Island – an audio review