Not every girl fits neatly into ‘success’ or ‘failure’. Some are distinctly one or the other by the end, some change back and forth through the years and some are a grey area all the way through.

A few girls are taken on as ‘experiments’ to see how they do. Jo was an experiment who failed, but here are some who made a success of things after a fashion. 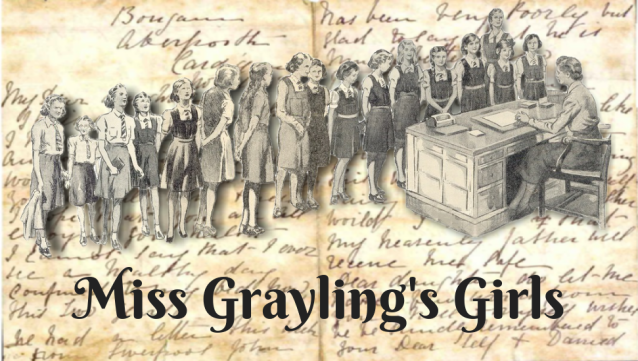 Daphne starts Malory Towers in the second form, and is immediately befriended by Gwendoline. Partly because Gwen has no ‘special friend’ of her own, but also because Gwen is a sucker for anyone she thinks matches her social status. Daphne is charming, attractive and tells wonderful tales of yachting with princes and staying up to champagne dinners.

All is not what it seems, however. Mary-Lou is also very taken with Daphne and when Daphne is upset that she cannot post a parcel, Mary-Lou goes out in a storm to do it for her. In possibly the most exciting chapter in any of the Malory Towers books Daphne ends up saving Mary-Lou from falling off a cliff. Initially lauded as a hero, we swiftly discover that Daphne is in fact a thief. The parcel she wanted to send was full of empty purses and jewellery belonging to the other girls, and she needed to send it away to dispose of the evidence of her theft.

Miss Grayling reminds Daphne’s that she has been expelled for theft from other schools already. What’s interesting is that neither school told her parents, just asked them to remove her. It makes me wonder what reason Daphne gave and how her parents reacted. Miss Grayling then says she will give Daphne another chance, but only if the second formers agree, and Daphne must tell them what she’s done herself.

The girls are surprised that a girl like Daphne would steal and Gwen immediately casts her aside, furious that she has been taken for a fool. The other girls are more understanding, and give Daphne a second (well, third at least) chance and she settles into Malory Towers quietly after that.

Daphne is an interesting character. At times she seems very nice and good, and yet she is a liar and a thief. She doesn’t seem to steal just for the sake of having nice things for herself, she steals them to try to make herself fit in with the wealthy girls around her. This allows her to be very generous with ‘her’ money, thus making her seem more kind and good than she is.

I have to think she’s also quite stupid, though. Miss Grayling knows her past as do the teachers. Even if she thinks that Malory Towers doesn’t know, seeing as nobody told her parents, she does the same thing at a third school. If you’re caught stealing and expelled twice why would you be daft enough to do it a third time

Thankfully the Malory Towers girls forgiving her seems to make her see sense, that her value doesn’t come from imaginary (or real) wealth and gives her a better chance at starting over.

Below; Daphne wraps her feet around a gorse bush and takes Mary-Lou’s weight on her coat’s belt to stop her sliding down the cliff. 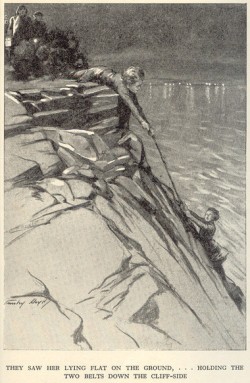 Zerelda is an American girl who arrives in Third Year at Malory Towers. She is very beautiful and cares greatly for her appearance. She styles herself so glamorously, with make-up and a fancy hairstyle that she is mistaken for a new mistress at first.

Like Maureen, Zerelda thinks herself a wonderful actress. In fact, she thinks she’s quite wonderful all-round and gets a bit of an unwelcome shock when her acting is  completely torn apart by Miss Hibbert and school-work is poor enough that she is put in a class with girls a year younger than she is.

However Zerelda is also quite likeable, as she is cheerful and friendly. Once she realises her future does not lie in acting, she throws herself into trying to be as much like the other girls at Malory Towers as she can. She also gets moved back up the school once she knuckles down to her work.

Below; Zerelda and her ‘Lossie Laxton’ hairstyle. 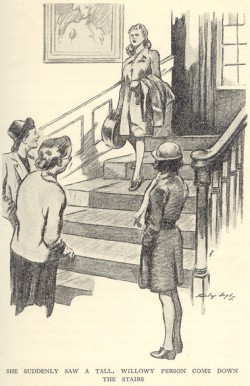 Ellen is a scholarship girl, joining the second form. She is quickly disliked by everyone as she is snappy and irritable and pushes away any offers of friendship. What the other girls don’t know is that she is terribly stressed about maintaining her results in order to stay at the school, and she is making herself ill through overwork. It all comes to a head when she ends up in the san for over a week, and by her perception is so behind on her work that the only answer is to cheat by looking at the exam papers.

Having been sneaking around looking for the papers she is then accused (by Alicia mostly) of being the thief (when as above, it is in fact Daphne). She ends up back with Matron while the other girls think she has been expelled but after a long talk with Miss Grayling Ellen is encouraged to stay and ends up moving a form ahead within a year.

I feel for Ellen. She had to work so hard to get to Malory Towers, and her family spent a lot of money on uniforms etc for her. She worked herself to exhaustion to pass the scholarship exam, then studied all through the holidays before she arrived at school. Then she’s run down and ill, and we all know how hard it is to write an essay or even answer a quiz when you’re like that. Then she gets accused of being a thief on top of it all.

Below; Ellen hides in a cupboard to avoid being caught snooping at exam papers, but Darrell finds her. 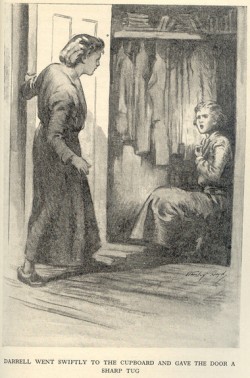 I just want to add that I know scholarship pupils aren’t experiments, they are every bit as bright if not brighter than those who are fortunate enough to be able to pay for a top class education.

I just included Ellen here as Malory Towers doesn’t have many scholarship pupils – in fact Ellen is the only one I know of. In that sense she could be a bit of a ‘trial’, to see if she fitted in with the richer girls.

Maureen is not a particularly unpleasant person, though she has a lot in common with Gwendoline Mary. She is quite full of herself, thinking she is marvellous at singing, acting, sewing, drawing and so on. Actually she’s quite average, so unlike someone genuinely skilled like Mavis she can’t get away with so much boasting. Even when she isn’t boasting she’s still talking about herself and her old school. She does also show a slightly nasty side at times, though. When she goes out for half-term with Gwen and the Laceys, she makes out that she never would have expected to be Cinderella (a lie) and that Gwen is in the huff as she wasn’t chosen (only partly true). She continues this charade back at school, winding Gwen up with constant references to how disappointed Gwen is and how she [Maureen] would never expect a part in the play.

What Maureen fails to realise is that while there is initially sympathy for her school having closed down, it’s very irritating for her to constantly talk about her old school – especially when she goes on about how much better it was than Malory Towers. Nothing wrong with her being very fond of her school, but a bit of a social faux pas to inadvertently slag off her new school while she’s at it.

The Malory Towers girls get tired of her very quickly and decide to ‘take her down a peg or two’. They suddenly pretend to see how marvellous she is at all the things she brags about, and ask her to do some things for the pantomime. Then when she presents them with drawings and musical compositions they laugh and pretend she’s deliberately done them awfully for comic effect. I feel bad for Maureen here as she is genuinely very hurt – but unfortunately a lot of it is of her own making as she is spectacularly unaware of her own limitations.

Maureen rather fades into the background after that – apart from needling Gwen. I think the other girls think they deserve each other and leave them to it!

Below; Maureen fancies herself as Cinderella for the school play. 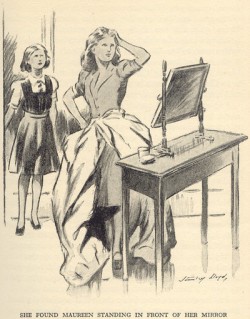 Maureen is also not quite an experiment. She is, however, taken on at very short notice as her own school has closed down. I suspect Miss Grayling perhaps lowered the entry qualifications given the situation, or didn’t have time to fully assess Maureen.

(I wonder where all the other Mazely Manor girls went, actually. Maureen says it’s a very select school so it could have had quite a small roll, but you’d think more than one might end up at Malory Towers)

This post was meant to be titled ‘in-betweeners’ and originally included eight more girls, ones who finished well, but nearly fell at various hurdles along the way. That took me to over 2,000 words though so I am saving those girls for another week!

Next post: Miss Grayling’s Girls part 4: The ones who almost messed it up