This Is Enid Blyton Magazine

The Rat-a-Tat Mystery is the fifth Barney mystery. This one has the children staying at Rat-a-Tat house in the middle of the country. It is even more isolated at the time of the book due to prolonged heavy snow. The lion’s head door knocker bangs (or rats) when no-one is there. Strange footprints have been made in the snow. A snowman goes walk-about. A face appears at the window. A mysterious glove, too large for any of the children, is found outside.

This is not one of the best Barney Mysteries – it comes rather late in Blyton’s writing career – but it has some good moments still. Snubby’s bear-fight with some crooks is a particular highlight for me.

The character of the week does not have to be a nice character, a character we like or look up to. It doesn’t even have to be the sort of character we love to hate. It can be someone we just hate because they are awful. Aunt Margaret from Hollow Tree House is one who can only be hated. She has taken in her husband’s niece and nephew (Peter and Susan Frost) as their parents have died. She does not, however, show them any kindness or sympathy. In a similar situation to the Arnold children, she has Peter and Susan slave around the house whenever they are not at school. They do not have nice things or get to go nice places. They are harangued, accused, slapped, guilt-tripped and scolded whenever Aunt Margaret is within reach. She truly resents the children and the additional ‘work’ they make for her. With a work-shy husband her life cannot be easy but it’s no excuse for the vicious way she treats the orphans in her home. 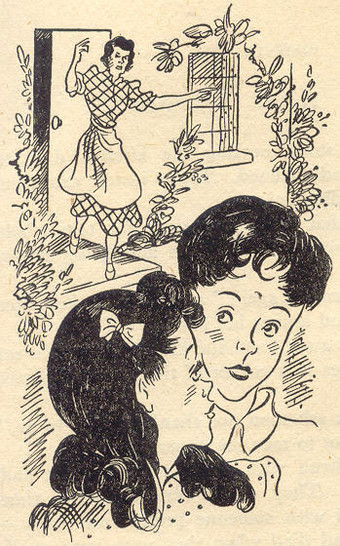 This entry was posted in Blog talk and tagged Hollow Tree House, January, Monday, The Barney Mysteries, The Rat-a-Tat Mystery. Bookmark the permalink.