While searching for information on who steals Noddy’s clothes in one of the books (for the latest search terms post) I stumbled upon something a bit random and surprising. Now that’s not that uncommon with the amount of stuff on the internet, but I thought this was worth a post.

Noddy loses his clothes is a painting by an abstract artist called Gina Parr.

The piece is from a series called Major New Dramas, and according to the Riseart website where I found it listed for sale, the series is partly inspired by Parr’s previous work as a designer for TV.

Noddy loses his clothes in particular is based on the a childhood memory of a Noddy story where he is left vulnerable and alone in the woods, having had his clothes stolen. Parr has said that those are feelings that commonly return to us all as adults, at some point in our lives.

The information above is only available on a cached version of the site found here (for how long, I don’t know.) The current Riseart page doesn’t explain the inspiration for the piece.

The painting is acrylic on canvas and is 1.2 metres by 1.2 metres, so quite large. It’s actually from 2007 so it’s not even new, just a little bit obscure perhaps! 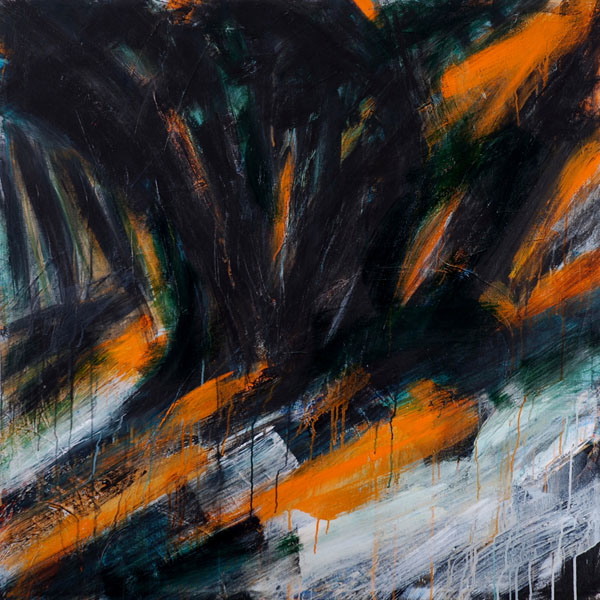 What do I think?

It’s not what I expected from the title. I can see a tree in the middle, a great dark one with branches reaching up, and trees in the background. Beyond that, though, I’m not great at interpreting abstract works. It’s certainly dark and scary. It’s not a sunny warm woodland scene with flowers and cute animals. There are may be shadowy figures and faces hiding amongst the branches. The orange and white stripes sort of suggest a lot of movement? Like blurry creatures rushing around. On a second look maybe the orange is actually sunlight filtering through the trees? (This is why I’m not the biggest fan of abstract art – I like to know what I’m looking at!)

I can sort of see the inspiration from the Noddy scene (from Here Come Noddy Again), but it isn’t the sort of piece that has an instantly recognisable connection to Noddy let alone a specific book. If someone was asked to guess what the painting was of I wouldn’t be surprised if they said a nightmare in the woods, but I doubt they would ever get Noddy. There’s no (that I can see) suggestion of clothing, Noddy’s colours of red and blue, Toyland, Blyton…

But then art isn’t always about showing us what we recognise. This piece is clearly about an individual’s memory of that story and much more about the emotions of the story than what it actually looked like.

Below: the original artwork for the story, and the modern version with the gollies changed to goblins. Both feature dark trees in the background.

I love seeing anything inspired by Blyton because it shows how big an impact she had on the children that read her books.

What do you think of it?

Apologies for the brevity of the post but Brodie is full of the cold and gaining about six new teeth at the moment. Sleep is rather lacking, and with a new bathroom going in time is short.

2 Responses to Noddy loses his clothes, artwork by Gina Parr