I didn’t end up doing jury duty last week, but I’ve got to attend again today at 10 – on my day off no less! Thankfully three of Enid’s fans have done the bulk of the work for Wednesday’s post already, some sixty six years ago no less. All that’s left for me to do is transcribe the letters and organise the photos!

It was a good thing he had no more money to spend or he would have bought a black dow a white cat, two mice and a parrot that would say “Pass the salt, please,” and then cackle loudly just like a hen that has laid an egg. Meddle thought it was wonderful.

Mr Meddle does some window shopping before getting lost in the fog in Meddle in a Fog, found in Merry Mister Meddle. 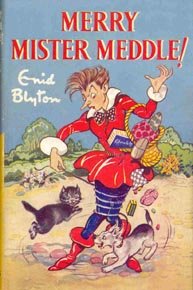 Peep-Hole is the home of Miss Dimity – or Dimmy as she’s often known – who often takes care of the Arnold Children during the school holidays. It is a funny, crooked sort of house with a tower on one side. It looks out to sea from a hollow in the hills, and that’s why it’s called peep-hole as it peeps out to sea.

It’s said that smugglers used to signal from the tower of Peep-Hole to the tower of a big old house further back on the cliffs. The children discover a secret passage at Peep-Hole that leads not only to the big house, but also to the Spiggy caves that give the book – The Secret of Spiggy Holes – its name.