Seeing as it’s Noddy’s 70th anniversary this month I thought I would look at the only Noddy book I have but haven’t yet reviewed.

The second Big Noddy Book, is as the name suggests, a large volume like an annual. Published in 1952 it has pictures by Beek, the original Noddy illustrator. 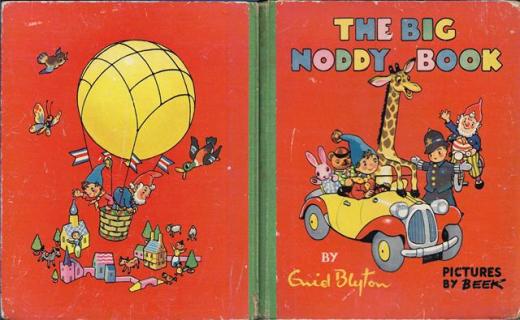 In her preface Blyton says:

This is little Noddy’s second Big Book. You liked the first one so much that he thought you would like another. Isn’t he lucky to have Little Books about him, and Big Books, too?

In fact she would go on to write another six big books, and eighteen more little books, not to mention the many many other stories, picture strips, board books etc she wrote about Noddy.

There is a mix of things, though perhaps not as much variety as some of her other annual-type books. They were all specially written for the book, rather than being taken from her magazines, and as far as I can tell none of them have been re-used (unless their names have been changed. There is a story titled Well, Really, Noddy in a later magazine but it’s not the same story), making this an even nicer book to have. 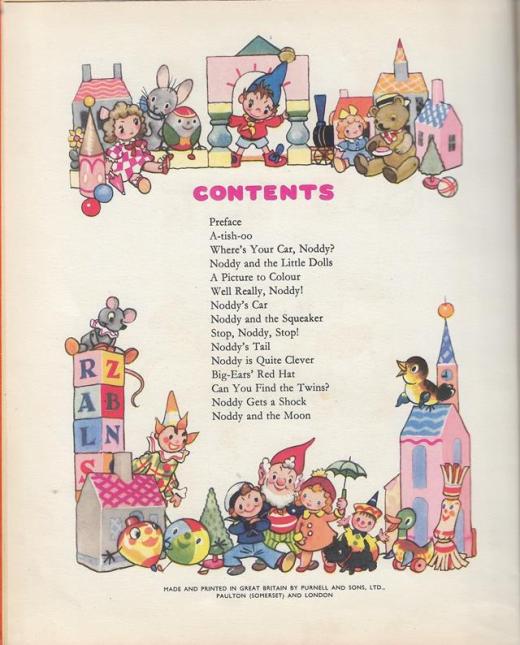 There are eight short stories, around five pages each: A-tishoo, Noddy and the Little Dolls, Noddy and the Squeaker, Stop Noddy Stop!, Noddy’s Tail, Noddy is Quite Clever, Big-Ears’ Red Hat, and Noddy and the Moon.

The other three stories are in picture-stip format, and those are: Where’s Your Car Noddy?, Well Really Noddy!, and Noddy Gets a Shock.

A Picture to Colour is exactly as it sounds – a colouring page, Can You Find the Twins? is a picture-puzzle and Noddy’s Car is a poem. 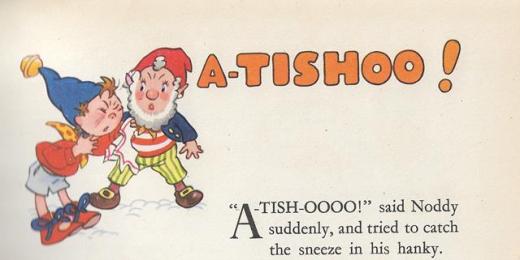 In A-tishoo! Noddy catches a cold – or as he says, a cold has caught him.

His poor car then catches it and Noddy takes care of it by pouring hot water and lemon into its water tank and keeping it warm under a blanket.

In Noddy and the Little Dolls, Noddy is asked to take nine(!) little doll children out for a picnic. Noddy’s car is a marvellous thing clearly as he can drive it with a picnic hamper under his feet (not to mention its ability to catch the cold!). They have a lovely time and a wonderful picnic;

Now I love a banana sandwich but they don’t keep well for long, so I hope they are all right by the time they ate their picnic!

Anyway, when it comes to home-time Noddy carefully counts the dolls to make sure he has them all. But alas! He remembers there are ten of them in total but can only count nine. He is terribly apologetic when he returns the little dolls to Mrs. Jolly-Doll but she laughs. Silly Noddy forgot to count himself! 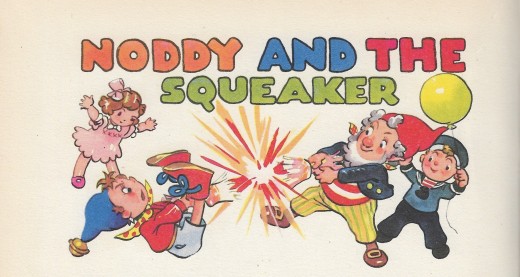 In Noddy and the Squeaker Noddy goes to a party at Mrs. Fluffy-Doll’s. He wins a squeaker in a cracker and puts it in his pocket without realising what it does.

The squeaker ends up falling into the lining of his shorts and making a noise every time Noddy sits down, and he gets more and more upset thinking he keeps sitting on a cat. Eventually Big-Ears solves the mystery for him.

Noddy borrows Big-Ears’ bicycle in Stop, Noddy, Stop! because his car is in the garage being mended. He stops to buy Big-Ears an ice cream as a thank-you but when he rides back an elephant chases him shouting Stop! and It’s mine!

If you look closely at the two illustrations I’ve included I think you’ll all be able to see why, and it has nothing to do with the ice cream.

In Noddy’s Tail, Noddy finds a tail lying on the road and tries it on for fun. He then forgets about it and takes a clockwork mouse to the train station. 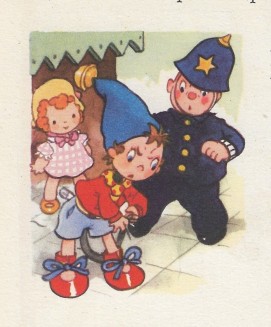 Everyone has a good laugh at his expense – except the owner who comes to claim his property!

Noddy is Quite Clever has Noddy going to tea with Mrs Tubby and Miss Tibby. Miss Tibby is upset as she has had an unpleasant time at the shoe-shop as the toy serving her laughed at her clawless back paws. 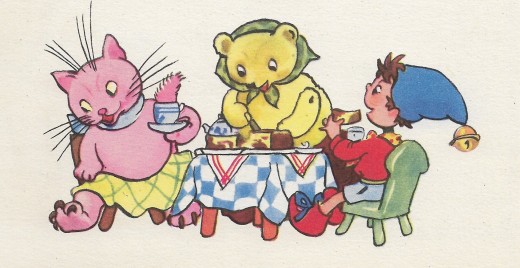 Noddy, desperate for some of Mrs Tubby’s chocolate cake, fashions some claws from rose thorns and presents them to Miss Tibby.

In Big-Ears’ Red Hat, Big-Ears’ loses his hat when Noddy drives him very quickly down a hill. Noddy tries his best to find the hat, but all the red things he spots belong to other people.

Just as Big-Ears is getting very cross they arrive back at his house to find the wind has returned his hat for him! 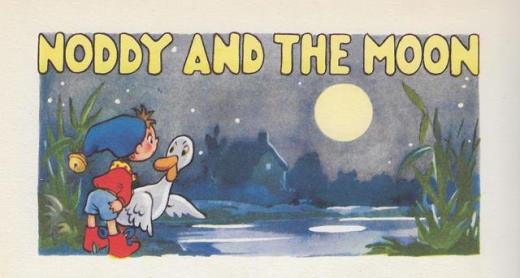 And lastly in Noddy and the Moon, Noddy is at his most foolish as he tries to catch the moon’s reflection in a pond. 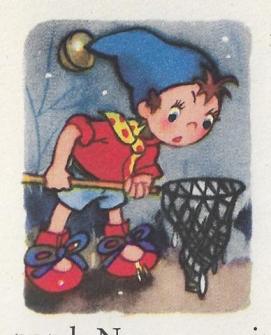 In Where’s Your Car, Noddy? Noddy’s car goes missing – having floated away on a big bunch of balloons! 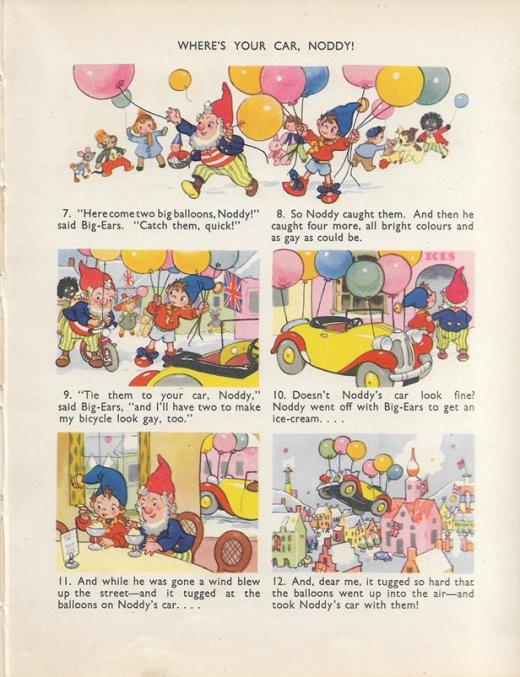 Then in Well, Really, Noddy, Noddy (who really shouldn’t be allowed to drive!) crashes into a toy house and demolishes it. Seeing as it’s made of building blocks it isn’t too hard to put it together again but he can’t find the chimney. Then follows a lengthy series of visits to different people. Mr Bricks the builder will give Noddy a chimney if he brings him two eggs, the farmer will give him two eggs if he brings him a ladder, and so on. He completes all these tasks – luckily the farmer gives him some milk without  payment of any sort or the story might never have ended – and Noddy gets his chimney.

Only, the house never had a chimney to start with, so he gives it to Mr Tubby for his hen-house.

Noddy Gets a Shock seems to feature his car as well –  I wonder what disaster can possibly befall it now! Well, it seems to have disappeared from in front of the ice cream shop! He and Mr Plod search all over the town for it and hear that a brownie was seen driving it. It turns out that Big-Ears saw it outside the shop for so long he thought that Noddy had forgotten it and took it home for him. Normally Big-Ears is much more sensible than that! 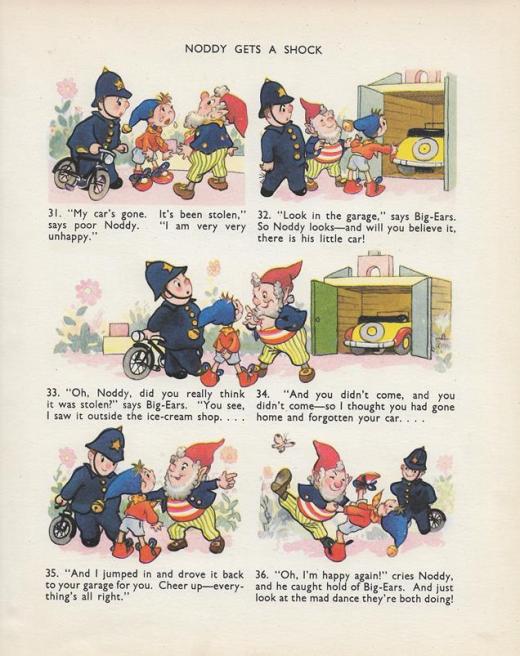 A colouring page, a puzzle and a poem

The colouring page has been mostly done already.

The puzzle is a nice one – all the Beek drawings in this book are great actually; 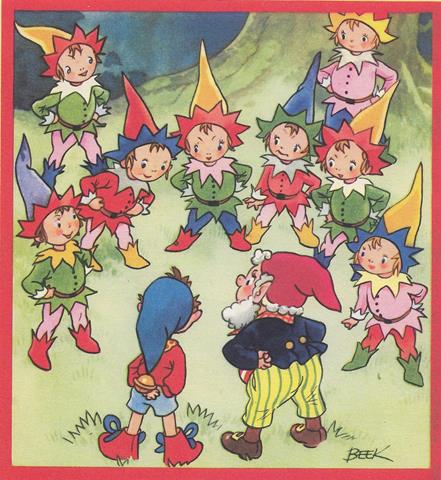 And here’s the poem; 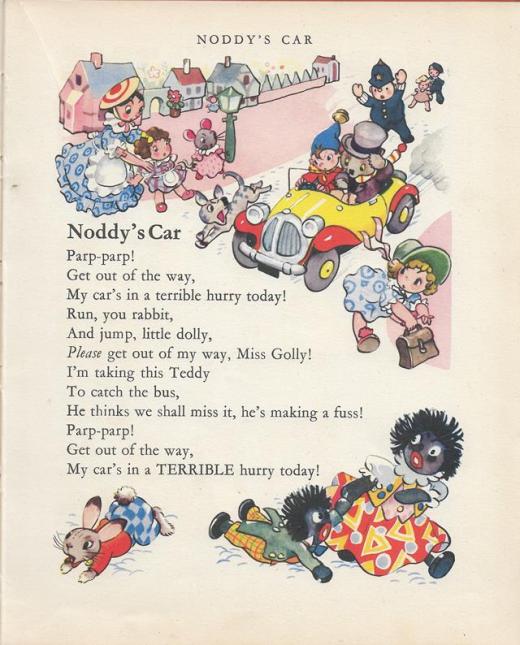 This is a really lovely book. I often find Noddy a bit tiresome but these stories are so short he doesn’t have time to mope or howl or be annoying. His problems also get solved nice and quickly so he doesn’t seem quite so idiotic!

There are hundreds of lovely illustrations throughout, which makes it very bright and colourful too. 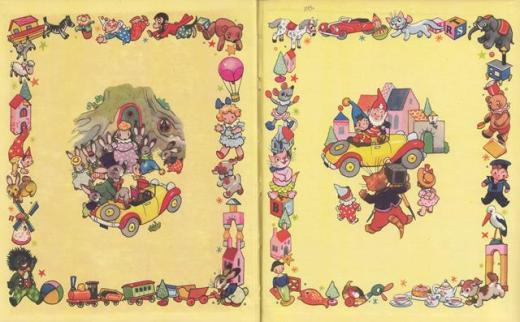