Somehow when I think of macaroons I still picture the little round French macaroons or macarons. I’ve actually made the kind of macaroons that the Find-Outers devoured by the dozen, with Stef when she visited a few years ago. When she said ‘let’s make macaroons’ I insisted on getting food colouring because I was thinking of those pretty pastel circles. We did add food colouring but it didn’t really have much of an effect. Saying that they were really good and everyone enjoyed them when we took them to our family fun day. I don’t have any photos of the ones we made but Stef did write about her first time making macaroons before.

The macaroons we made and the ones in Blyton’s books are quite different to macarons but still delicious (I’ve never tasted a macaron, so I have no idea what they are actually like.)

In Aldi the other weekend I spotted macaroons on the shelf and decided to try them. For 85p it seemed silly not to. Well, I had forgotten just how good macaroons were! I got the coconut ones as I love coconut but they do chocolate ones too.

I thought about doing a blog post on macaroons but I had no self control and ate all the macaroons before I had a chance to take photographs in daylight. Oops. Never fear, because Tesco also sell macaroons. I added two packets – coconut and chocolate – to my online order. These are slightly dearer, £1.20 a pack but they were on offer for £1 when I bought them.

I honestly can’t tell the difference between the Tesco and Aldi ones so I definitely recommend the Aldi ones seeing as they are much cheaper. You get six in all the packs, which if you were a Find-Outer would only last one sitting, but one or two at a time is fine for me. 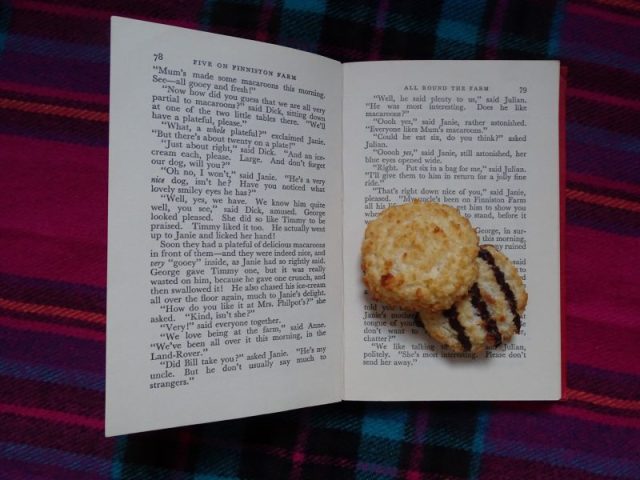 Macaroons are probably most associated with the Find-Outers, as they are forever at the dairy/cafe in Peterswood, though curiously, I can only find references to macaroons in the later books, ten and on.

They go in towards the end of The Mystery of the Strange Bundle and order hot chocolate and macaroons. The shop woman says five macaroons?  and Fatty answers Gosh, no – ten to start with, just so we won’t look too greedy.

There’s no mention of them ordering any more macaroons but as they leave Pip remarks that there is one left, does anyone want it. Nobody does – as they’ve had a rather sobering conversation with Mr Goon in the meantime, so it goes to Buster. Larry does say that Fatty had had four or five, already though. So either they ordered more or the shop woman brought them ten each to begin with!

After the mystery is solved Fatty invites Mr Goon to stay to tea and they serve macaroons which Mr Goon has four of as well as three slices of chocolate cake.

They also eat rather a lot of macaroons in The Mystery of Holly Lane. In chapter 11 they have tea at Pip’s and have brought back an array of goods from the baker’s. 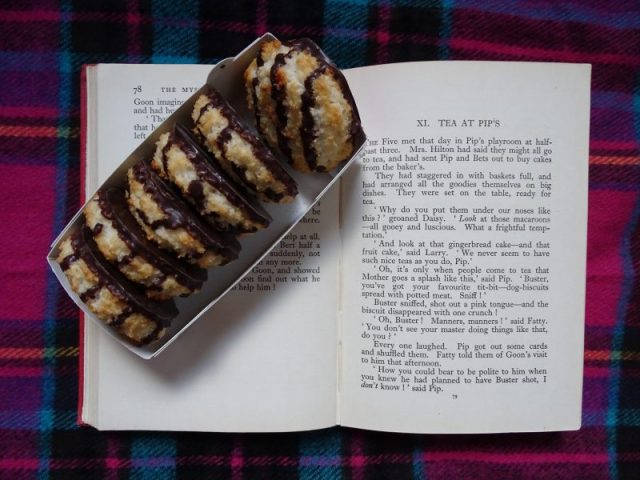 Look at those macaroons – all gooey and luscious. What a frightful temptation, says Daisy. There’s no mention of exactly how many – but enough that Buster has been apparently having a good lick at one.

After solving the mystery Superintendent Jenks takes them out for a treat.

Isn’t there some place here that sells ice-creams and macaroons?

Ah here is the place I mean. Yes. Best macaroons I ever had in my life came from here.

That’s three each, as there are the Five Find-Outers, Jenks and Marian (plus Buster).

The Famous Five also indulge in macaroons, but only in two books – Five on Finniston Farm and Five Go to Demon’s Rocks. In Finniston Farm the little shop in the village makes marvellous ones – even Junior raves about them saying he buys thirty a week!

When the Five enter the shop the girl there – Janie – tells them that Mum’s made some macaroons this morning. See – all gooey and fresh. 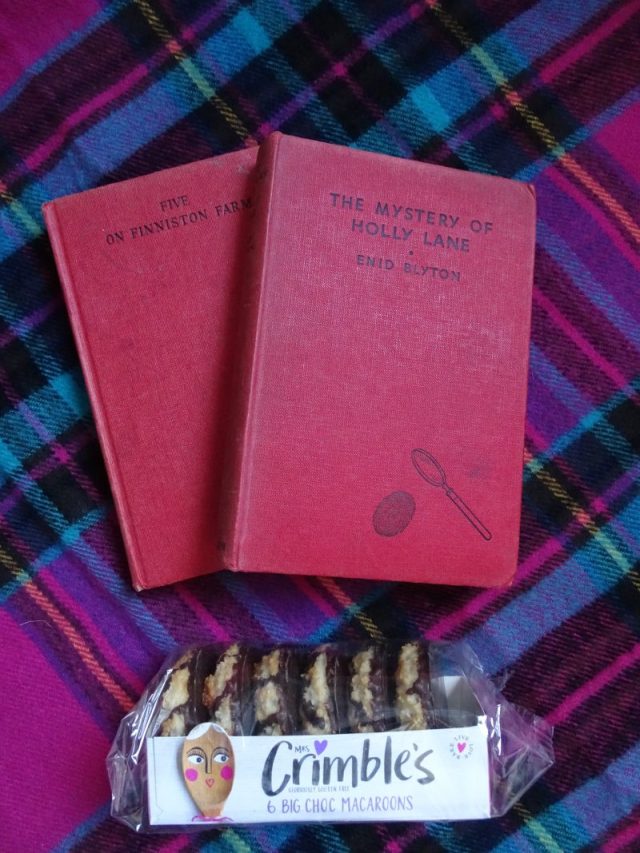 Now how did you guess that we are all very partial to macaroons? Dick replies, then orders a plateful.

What a whole plateful? But there’s about twenty on a plate! Janie exclaims.

Timmy gets one but as with so many things it’s a waste as he eats it in one bite. They then buy six macaroons for Bill who has given them a Land-Rover tour. He likes macaroons, as Janie says, Everyone likes mum’s macaroons.

Janie’s mother is amazed that twenty-four macaroons have gone since she last looked. But Julian says they were most delicious and she’s quite pleased with that.

In Demon’s Rocks the macaroons have been made by Joanna and referred to as home-made, Joanna’s speciality. Strange that has never been mentioned before, though!

As an added note; Brodie likes macaroons. He came through to the kitchen and found me sitting on the floor taking photos (it was the only place with decent light at 3pm). First he laughed, then he wanted me to take photos of him and then he ran off with a chocolate macaroon which he professed to be ‘Mmmmm’.

I’m hungry just writing this. How many macaroon fans are reading?

This entry was posted in Food and recipes and tagged Five Go to Demon's Rocks, Five on Finniston Farm, Macaroons, The Five Find-Outers, The Mystery of Holly Lane, The Mystery of the Strange Bundle. Bookmark the permalink.