If you like Blyton: the Bobbsey Twins by Laura Lee Hope

This recommendation comes to you via one of my regular readers and commenters, Sean Hagins, as I have never read any Bobbsey Twins books.

Sean has reviewed these books extensively on Goodreads and so I will not duplicate them in full here, but I will provide some background information on the Bobbsey Twins and the author, as well as quoting and linking to Sean’s reviews.

There are rather a lot of Bobbsey Twins books. The very first book came out in 1904, and that original series ran for 72 books, the last published in 1979. Much like Nancy Drew the series was refreshed in 1980 for six years, and ran for 14 books  – this is sometimes known as the Wanderer series due to the publisher being Wanderer books. Interestingly three of these were originally published as The Tollivers series, and then just had the name and other details changed to fit into the Bobbsey Twins series.

It was then refreshed again in 1987 for The New Bobbsey Twins), and this time there were 30 books published, the last in 1992.

There are in fact two sets of twins in the books; Bert and Nan Bobbsey who are 12, and Flossie and Freddie Bobbsey who are six (and I thought Blyton was obsessed with twins!). These four siblings have many adventures, solving mysteries like junior Nancy Drews or Hardy Boys – some of the later books actually say a pre Nancy Drew/Hardy Boys Mystery Book at the top so I assume they were aimed at both genders, whereas Nancy Drew were seen as girls’ books, and the Hardy Boys as boys’.

I love the Nancy Drew books and plan to do a recommendation for them myself later.

Just a caution; many of the reviews linked to below include spoilers including the identity of the baddie(s).

In which the Bobbsey twins search for a poodle who interrupted a ballet performance and then was stolen.

Sticking with the theme of not starting at the beginning, this is one title that Sean does not particularly recommend, though he still rates it as three stars. He notes that it is one that I never really liked… I can see that it’s all over the place, and points out the implausibility of the twins being just too good at too many things as between them they are gymnasts, band members and now ballerinas. Although both Blyton and other authors of the time frequently features children with improbable amounts of freedom to explore, Sean notes that there is NO WAY an adult would let a 12 year old boy and two 6 year old twins go off by themselves on the streets of New York City!

So by the sounds of it unless, like me, you are a stickler for reading right from the start of a series you might as well skip this one.

Secret in the Pirate’s Cave

In which the Bobbseys are off to Bermuda, and become involved with thieves trying to steal valuable artefacts from the local museum.

Mrs Bobbsey wins a free trip for two to Bermuda! Mr Bobbsey can’t make it, so he suggests she go with the 4 twins (he pays for the other 3 tickets presumably). They are told by the police Lt to watch out for “Slippery Sam”. The Bobbseys are eager for another mystery along with their vacation and decide to keep an eye out.

Well, the thrills start right away.

Read the rest of the review here.

In which a dune buggy bought at the town dump is stolen.

Sean’s review can be found here. 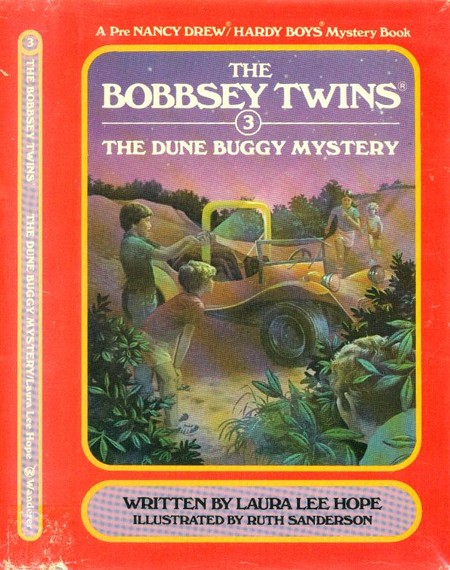 In which the Bobbseys’ favorite pony, Cupcake, is stolen and the twins join forces to rescue him. The Thrilling conclusion includes a near kidnapping, a confrontation with the thieves, and the Bobbseys’ exciting television appearance!

No review is available for this one I’m afraid – but it sounds good!

In which the twins are on holiday in California and get involved in a parade, and have to work out who is vandalising the floats and trying to spoil the parade – all while trying to follow some mysterious clues to a treasure.

Clues start appearing to a mystery! This one is a benign one of mention of treasure and the fact that they have to track down the next clue and the next to find it. Between this, and the building of the float, you would think the twins’ plates are full, but also, there is another mystery occurring-a not so nice one! The flowers for the Hamlin’s float are vandalised  a tent collapses, the Hamlins have been receiving threatening letters saying that the float won’t enter, and other strange things! 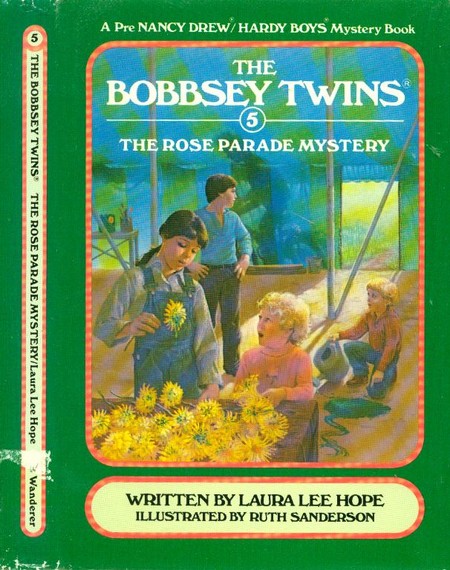 In which the twins help the members of a Camp Fire club to catch the culprits who stole their bicycles.

This time, the twins are visiting New Mexico and staying with Tony and Kathy Leonard. The story opens with an out of control hot air balloon crashing on the Leonards’ property. The balloonist acts in a secretive and suspicious manner, getting the twins intrigued enough to want to investigate him. When his truck drivers arrive to haul the balloon away and take him back, Mrs Leonard voices the twin’s questions to him (much to their chagrin as they wanted to check him out without him knowing). Ryan Michaels (the balloonist) gets even more surly and tells them to mind their own business.

Later, the Bobbseys see in the newspaper that there is a rash of bicycles being stolen in the area…

The rest of the review can be found here. 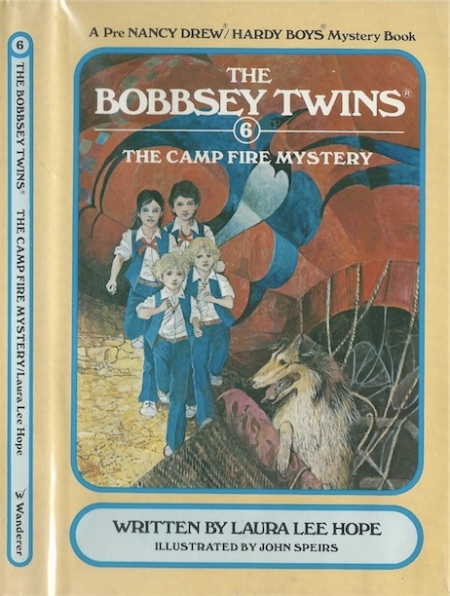 In which the twins are faced with a dangerous puzzle that leads down twisting trails, as they attempt to foil an international band of thieves

No review is available for this one – I had to do some searching just to find a synopsis! I wonder what the double in the title refers to, simply the double set of twins, or something else? 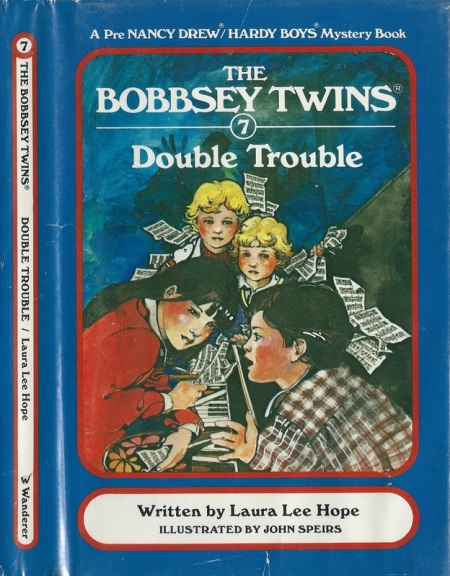 Mystery of the Laughing Dinosaur

In which the twins track down a valuable stamp stolen from a museum.

This book is pretty good – the title is misleading as the Laughing Dinosaur is a small subplot that doesn’t have much to do with the main plot.

The tone of this book is kind of all over the place. The main mystery deals with a stolen valuable stamp from a museum. It
seems to be the usual fluff with the kids tracking down a missing stamp, and yet, there are parts of this story which are quite a bit darker than any Bobbsey Twins book I remember.

Read the rest of the review here. 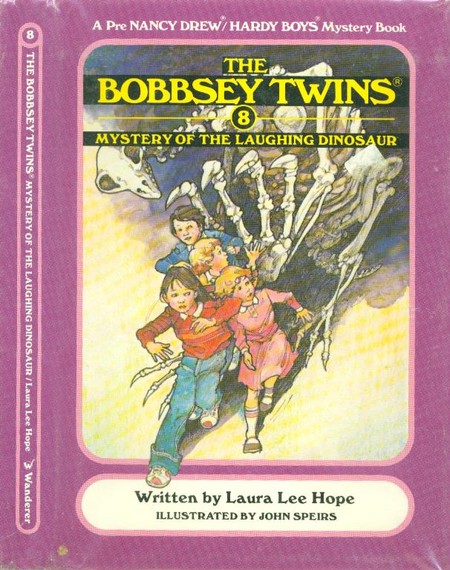 In which Flossie receives a music box that may have been intended as a gift for someone else and the twins quickly realise that a mystery is involved.

They are sticking to the same old formula of a main mystery, and a side mystery. In this case, the main mystery works very well and is a good story by itself. The side mystery falls flat to me and seems kind of tacked on…

The Ghost in the Computer

In which the Bobbsey twins investigate a ghostly figure in the school. 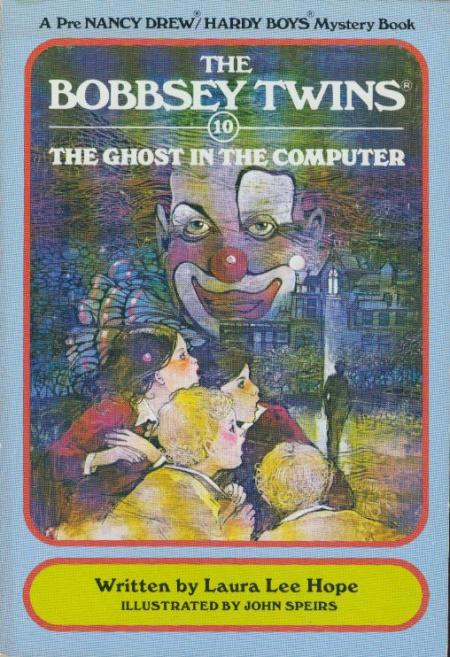 In which a scarecrow who disappears and reappears at other locations and an odd-shaped key lead the Bobbsey twins into another mystery.

Before I begin this review, let me say that this book is my absolute favourite of the Wanderer series (with #2 Secret of Pirate’s Cave coming in at a close second).

This one keeps a good continuity with the last book as in that one the twins had their last week of school and started their summer vacation. Here, the twins are still on summer break. It starts with the family on the way back from a day trip to the beach. Freddie points out a scarecrow that they are passing by in their car and says that on the way to the beach, it was in a different field a couple miles away.

It sounds somewhat Wizard of Oz-ish to me, but I bet there is a far more logical explanation for the moving scarecrow.

In which the Bobbsey twins suspect that odd events at a historic Oklahoma mansion and the theft of a duplicate dollhouse may be connected with rare animals being stolen from the zoo.

Despite a lot of tired tropes and recycled ideas and the way everyone knows the Bobbseys and are in awe of them), this really was an enjoyable read. The action was fast paced and the storytelling was entertaining. I think the Wanderer series ended on a high note with most of the best stories contained in the last 4 or so books (Unlike the New Bobbsey Twins which started out even stronger, and then fizzled away!) I give this book a 9 out of 10.

The full review can be found here. 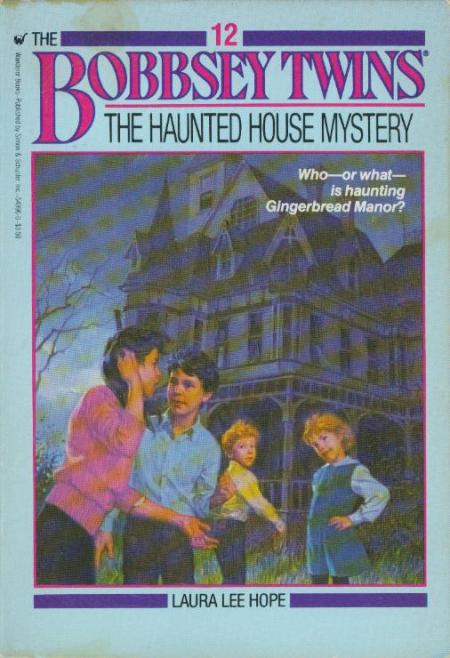 The Mystery of the Hindu Temple

In which the Bobbsey twins travel to Nepal where they become involved in investigating the theft of valuable Hindu temple treasures.

(Gosh these kids are well-travelled!)

Overall, this was an interesting addition to the series that I really enjoyed. I give this book an 8 out of 10.

The whole review can be found here. 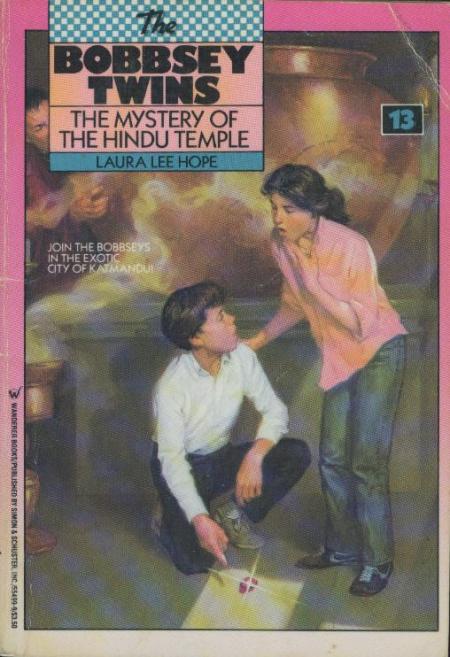 In which the Bobbsey twins are drawn into a mystery involving the manufacture of perfume while on a family vacation in Paris.

So, we come to the final Wanderer book now! It’s been fun rereading this series.

Before I start, I will say that this title is one of the more puzzling as the gargoyle isn’t even mentioned until the book is two-thirds of the way in, and isn’t really a major plot point anyway. I would call it, the Case of the Missing Young Woman, or Mystery in Paris, but I digress…

So thank you to Sean for letting me use bits of his reviews here. You can see some photographs of his Bobbsey Twins books on Flickr.

A bit about Sean:

Hello! My name is Sean J Hagins. I’m 44, so a bit too young to have read Blyton when it was new, (and some would say too old to read Blyton now!)  Actually, as a kid in the 1980s, I loved reading what I guess would be called old-fashioned (or I like to say “classic”) children’s books. As a Jehovah’s Witness, I don’t like books with sexual themes, graphic violence, cursing, or supernatural things – which even a lot of today’s young adult books have.

This entry was posted in Reading Recommendations and tagged If you like Blyton, Laura Lee Hope, The Bobbsey Twins, The Stratemeyer Syndicate. Bookmark the permalink.

7 Responses to If you like Blyton: the Bobbsey Twins by Laura Lee Hope