If you like Blyton: The Adventurers and the Cursed Castle by Jemma Hatt

As you’ve seen me say before I am always quite wary of anything that proclaims to be perfect for fans of Enid Blyton. However, in this case, I think the claim is justified.

There are three books in The Adventurers series;

and they are available in paperback, as ebooks and on audiobook.

Full disclosure: I was given free audiobooks of all three Adventurers books in return for an honest review. If you’re new to my reviews I’ll tell you now that I am brutally honest in the failings of any books I review – even ones by Blyton herself.

The audio part of the book

As a side note: I know not everyone gets along with audiobooks, but I love them. I listened to this while cooking, walking, hanging up the washing etc.

The narrator here is Ciaran Saward and he does an excellent job. He gives each character a distinct and convincing voice – both male and female, and Great Uncle Herb and Mr Bunce are particularly good. I thought his Cornish accent was perfectly good, too, but native Cornish folk may disagree!

With one exception (Stephen Fry doing Harry Potter) I always have to play my audiobooks on somewhere between 1.3 and 1.5 speed, depending on how ridiculously slowly the narrator speaks so I was very pleasantly surprised to find that I could listen comfortably to this at the natural speed (though I think I used 1.1 in the end just because I was impatient to find out what happened next!).

The Adventurers, the baddies and the background characters

I am going to try very hard not to simply explain the whole plot of the book with additional comments like I so often do. Instead I will try to touch on all the areas where I think this book succeeds in pleasing a Blyton fan.

First, the characters starting with our titular Adventurers.

They are Lara Jacobs, her cousin Rufus Kexley, her dog Barney, and Tom Burt who they meet on holiday.

Rufus has the strongest personality out of the three and he instantly struck me as a modern-day Snubby. He’s absolutely irrepressible and loves jokes and pranks much to the despair of any adults responsible for him. He, like Snubby, seems to be bounced between adults, too. He spends most of his time living with grandparents (his mother is off in America trying to become famous) and goes to stay with Lara when they go off on holiday. He’s not an orphan, like Snubby, but he might as well be.

Lara is, like Diana (and Roger), exasperated by her cousin. In fact, they don’t get on at all at the start of the story but that changes as they start investigating the mysteries of Kexley Castle. She is not like Dinah otherwise, though, she is perhaps more of a George. She doesn’t need to shout about being as good as a boy but she definitely makes the point that she shouldn’t be left out because she is a girl, and it’s often down to her to make the leaps of logic required in solving a mystery. She is also the owner of the dog in the series. 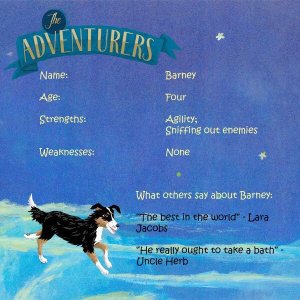 Barney, I’m afraid to say is no Timmy or Looney (or Buster, or Scamper…). In one of my few criticisms of the book, Barney is almost forgotten a great deal of the time. I know George is probably over obsessive about Timmy, but he has strong personality and is always involved. I honestly forgot about Barney several times as there were whole chunks where he wasn’t mentioned. He plays an important role in a couple of scenes, but other than that he doesn’t really have a distinct personality. Saying that maybe he’s more realistic than Timmy! 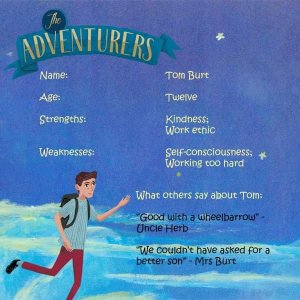 Tom is harder to find a parallel for. He is the one with the local knowledge, and is a sensible and organised type. He’s a bit of a loner due to helping out his parents at Kexley Castle so much (business there is poor so there isn’t a lot of money coming in). In a Blyton book the son of a housekeeper would either be an annoying gnat like Yan or tolerated but not welcomed as they would be of a lower class, but here of course it’s natural for Tom to make fast friends with the visitors and it’s heartening to know that it will continue into other books.

Then the baddies are Mr Bunce purportedly of The British Museum (and not of Boggis, Bunce and Bean, but just as nasty) who comes to stay at Kexley Castle in the hope of stealing the lost Egyptian Treasure, and Karim his assistant who lurks around following the children. Mr Bunce is an extremely oily and unpleasant man who the children know is up to no good at once. He is quite idiotic and bumbling at times, but at the end shows that he is a cold and dangerous man.

The other characters are Tom’s parents; his mother is the housekeeper of the castle and prepares the meals, while his father works for the produce business owned by Uncle Herb. He spends a lot of time down the pub which leads to various amusing digs from his wife.

Uncle Herb is really Great Uncle Herb, and the owner of Kexley Castle. It wasn’t immediately apparent how the family tree went but I think I’m right in saying his younger brother is Lara and Rufus’ grandad, and then their mothers are sisters. (I’m not sure where Mr Jacobs, Lara’s father is – the one downside of audiobooks is it’s easy to miss a few words without noticing sometimes). Anyway, Uncle Herb is a somewhat crotchety old thing not too far from Uncle Quentin or Uncle Jocelyn.

He resents the intrusion of the children and makes no attempt to hide it – but he also joins in the treasure hunt for a brief time, giving up when the first clue seems to lead nowhere.

And lastly there is Sam, and old blind man they meet on the beach. He is really quite rude to the children and often refuses to acknowledge them, but he has a sad backstory.

Is this a new Famous Five?

No, but not because it isn’t good. More because it draws on different genres and plots.

I couldn’t pick any Blyton series that I thought this was a modern-day equivalent of, but as with the characters I could pick out several little likenesses to Blyton’s – and other authors’ works. I’m not suggesting anything has been copied, but perhaps these were inspirations – or I’ve just read so much children’s books you couldn’t write anything without it reminding me of something!

First up – Five on a Treasure Island, as there is a treasure which has been brought back from Egypt on a ship, then lost. Not totally dissimilar to George’s great-great-great however many grandad who brought the gold ingots which then disappeared. Both turn out to have been hidden, with clues left to its location, though the ones in the Cursed Castle are much more complicated than a single map. The historical back-story is more detailed in Cursed Castle – it includes a curse – and we get quite a sense of Jack Kexley’s personality as the children follow his many clues.

Also like the Famous Five the parents/responsible adults are gotten rid of quickly with the grandparents off on a cruise and Lara’s mother having to suddenly travel abroad for work.

It is also has similarities to The Treasure Hunters, with a large family home/castle likely to be sold due to a lack of money, and then saved by three children who find the long-lost treasure. Mr Bunce and Mr Potts play similar roles, too.

As for non-Blytons it’s a little bit Nancy Drew-ish or even National Treasure-ish given the complexity and number of clues they must find and solve.

I think so. It has strong characters both in our main child cast, the baddies and the other adults. The puzzle is somewhat fantastical but that’s part of the fun (a single coded clue would lead to a very short story for one thing), and leads to enough red herrings and suspenseful situations to carry the reader’s interest.

It is modern, set in current time, but is not filled with annoying slang or pop culture references in an attempt to be ‘current’ and so it shouldn’t date quickly at all. The children use a computer to look up some information at one point (a charmingly slow and ancient PC!) but the children are not constantly on mobile phones nor do they use them in solving the mystery or getting out of trouble. There are one or two ‘fart’ jokes courtesy of Rufus but that says more about him than the book.

I have read an interview with Jemma Hatt where she talks about her discussions with a potential publisher over the cover design; they wanted to use stock photos while Jemma was set on having an illustrated cover. I think she was absolutely right on that, as she has ended up with a great series of covers  by Andrew Smith while stock photo covers can so often look cheap and nasty.

On the whole I found it amusing, engaging and I look forward to listening to the next one, and I will review that too.

2 Responses to If you like Blyton: The Adventurers and the Cursed Castle by Jemma Hatt