We are nearly at the end of the series now, only one more episode to go after these two!

In case you missed any of the previous posts:

I keep forgetting the episodes have names but I will include them from now (and go back and add them to previous posts).

The titles give you a clue as to what part of the book will feature – and this time it’s the part where Gwen plays mean tricks on Mary-Lou and tries to blame Darrell and Alicia.

It begins with Gwen demanding Mary-Lou’s help with French prep but she’s too busy organising Darrell’s stockings by thickness. Gwen points out it’s weird and I have to agree! In the books Mary-Lou keeps tidying Darrell’s locker to “help” but she at least stops short of organising her stockings.

Darrell gets frustrated with her in both the book and the episode and Mary-Lou ends up smashing one of Darrell’s photos of her family while trying to kill a spider, and then the photo gets torn. Darrell is furious and snaps at Mary-Lou, saying she would like to send another spider her way.

It’s clever how they weave together different parts of the book. In the book it’s Alicia’s photo, and has nothing to do with a spider, but in both Gwen tricks Mary-Lou by putting a spider in her desk. However, in the book this happens in the first third and the rest of the tricks occur nearer the end. The TV show has condensed the story so that it becomes a more intense campaign of tricks.

As in the book Gwen cuts Mary-Lou’s tennis racket but she also puts her gym kit into a bucket of water. This causes her to catch a chill (but makes me ask how she could be so stupid as to wear a soaking wet kit) and therefore be unable to swim (in the book she just catches a cold), bringing us to the other plot of the episode.

Sally and Darrell hatch their plan to give Mary-Lou confidence and it goes pretty much the same as the book – Darrell pretends to be in difficulty in the pool so that Mary-Lou will throw the life ring and save her, only the ring isn’t there and so Mary-Lou jumps in herself. The only difference is that Mary-Lou actually pulls Darrell to safety, rather than needing rescued herself.

Tying in a future plot the girls buy Mary-Lou a fancy pen as a reward. (And Mary-Lou saves Gwen from a spider in an amazingly sudden show of confidence).

Stef and I said at the start of this that we’d better finally find out who the ghost is, and that it had better be good. We did and it was – I will give a spoiler alert before I give it away.

We have Mary-Lou seeing the ghost in the toilets just off their dorm room, and she thinks that the ghost is the one playing the tricks despite Gwen’s insistence that it is Darrell and Alicia.

Sally draws a map and marks all the ghostly sightings, working out that they all have their dorm and the san in common. She and Darrell plan an overnight ghost watch, and Darrell suspects it is Matron.

In following the ghost – who is nowhere near bulky enough to be Matron! – they discover a secret passage. There are no secret passages in the books but it is such a common Blyton plot point that I’ll let it slide.

Here is your spoiler warning! Do not read on if you don’t want to know the identity of the ghost.

I want to say here that I CALLED THIS! I said to Stef more than once who I thought the ghost was, and why she was doing it and I was right. I even put my theory in my review of episode seven.

We get more hints that [Emily] isn’t all she seems. She tells the Riverses that her mother is a nurse but can’t remember where she works (and is a bit flustered about being asked.) I’m starting to wonder if they haven’t lifted a plot from another St Clare’s book and she’s going to turn out to be the daughter of one of the school staff with a free place there. (In episode 8 she refuses to recount her seeing of the ghost from the previous episode when a painting falls off the wall, and I suspect she might have been sneaking down to visit her mother, but we will see!).

Well last night I was insisting that Emily was the ghost, visiting her mother, Margaret in the san. I was right. It’s no secret at St Clare’s that Eileen is Matron’s daughter, but it causes various problems. In the show Margaret arthritis in her hands, meaning Emily has been sneaking down at night to help with her darning and other sewing work.

As if that isn’t dramatic enough Matron catches them (having been waylaid on her way to the pictures by Gwen telling tales about secret passages) and upon hearing Margaret has arthritis fires her on the spot. She’s actually quite kind about it – for Matron anyway. She says she is sorry that she is ill, but she must put Emily first and not use her as a helper seeing as it is affecting her school work. 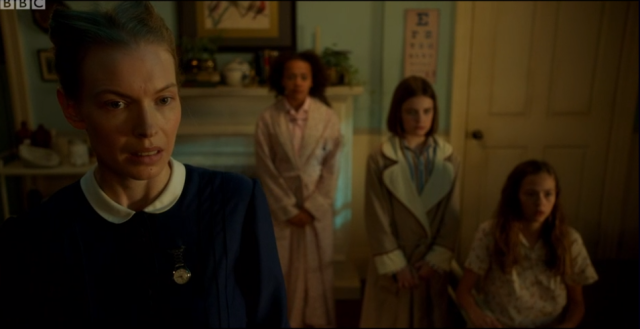 It is down to Emily, Darrell, Sally and even Gwen to talk to Miss Grayling (who is thankfully back!) and tell her the problems they have had with Matron that term. Matron returns to form and denies knowing about Margaret’s arthritis and calls her lazy, but Miss Grayling doesn’t believe her.

I was baying for Matron to be fired but I knew it wouldn’t happen, if there is to be a second series she would have to come back and continue being the antagonist. Instead Margaret gets promoted to Matron of South Tower with her own assistant, and Matron must do her job without an assistant.

Then we end on some of the best acting in the whole series, and no surprise is from Danya Griver as Gwen as she smashes Mary-Lou’s pen. There’s no dialogue, just a whole host of emotions showing on her face from sadness to rage to satisfaction. 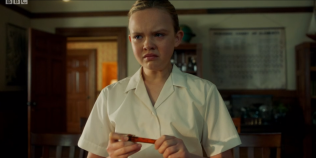 It is a shame we have such a limited number of teachers for the series as it means Miss Potts is not only the first form’s main teacher but she also referees lacrosse and in episode 7 teaches chemistry too. (The Malory Towers girls never seemed to do science at all so it was good to see them getting a slightly more rounded education). It also meant that Mam’zelle Rougier was the one to deal with the spider trick, and her jumping around and screaming hysterically isn’t quite as funny (or as realistic) as it would have been with Mam’zelle Dupont.

Miss Potts is channelling a bit of Jillian Holtzmann it seems!

Talking of the spider the fake one was pretty awful – it wasn’t even the same size and shape as the spider in the live shots. What was good was the additional story of Gwen getting the gardener’s boy to catch the spider for her, pretending she was doing a project on spiders. Enid’s single line about Gwen catching one somehow now seems a bit contrived. (Odd how we get random scenes with this additional character who doesn’t have any real importance but we couldn’t have had a third teacher!)

Also added is the idea that there is a lifeguard for the pool – though it seems to be a school girl with a whistle (Alicia calls her Barbara when asking her to judge their race). When you think about the books it’s actually a bit mad that the girls are allowed to swim with no adult supervision all the time – and/or without a life ring being available! On screen the lack of life ring is screamingly obvious as the empty white board for it is right next to Mary-Lou so Darrell really should have noticed it! The life guard is pretty useless in any case as she just stands with the other girls at the far end of the pool and watches as Darrell ‘drowns’.

In a strange little added scene Gwen gives a presentation to her class all about the bouffant hair-do, using Mary-Lou as a rather unwilling-looking model. No idea what that was about other than filling two minutes of an episode?

As always the secret passage was extremely well-lit for a passage with no windows and no lights.

And lastly I thought it a shame that two important previous plots were completely forgotten about. Darrell’s ‘word blindness’ has either gone or she hasn’t had to write a single thing in class, and Pamela doesn’t seem to have come back from her debutante ball, not even to collect her belongings and say goodbye.

Just one episode left, then, which I will review soon and then I can give my thoughts on the series as a whole. I anticipate this last episode will reveal Gwen as the person carrying out the tricks on Mary-Lou, but I wonder what else they’ll throw in?

12 Responses to Malory Towers on TV – Episodes eleven and twelve