If you like Blyton: The Indian in the Cupboard by Lynne Reid Banks

Despite being known as a ‘children’s classic’ I have only read this series for the first time recently. I had seen the 1995 film before and had a certain fondness for it, but the notion of there being a book as well eluded me for a long time. I actually got the film for my Christmas and although I enjoyed it, it wasn’t a patch on the book!

I discovered it was a series in 2014 when I added the first book to my ‘to read’ shelf on Goodreads, though curiously I didn’t add the rest of the series until October last year. I read the first one on my Kindle in October, then while at work at the end of last year I decided to head into the children’s stacks and grab the rest of books as they were all there (in non-matching editions), and I wanted some books to keep me going over Christmas and into the new year if we didn’t reopen straight away.

The series comprises five books of which I’ve read the first three. 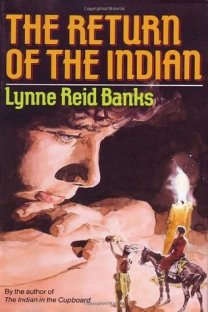 Who is the Indian, and what is the cupboard?

Little Bull (Little Bear in some editions) is an Iroquois chief from the 18th century. In the story, he begins as a plastic figure given to Omri by his friend Patrick, on his ninth birthday.

Omri is also given an old medicine cabinet by his older brother, and although that seems an odd present he is pleased as he loves secret hiding places for his private treasures.

The cupboard doesn’t have a key but Omri’s mother has a load of old keys and one of those – one she chose as a token from her grandmother before she died – fits the lock.

Omri put the Indian, which initially he was disappointed to receive as a gift, in the cupboard and locks him in, only to discover the next morning that the Indian has come to life, becoming a living, breathing man, but still just three inches tall.

The cowboy in the cupboard

Although the title of the book suggests it’s all about Little Bull, there are other figures brought to life by the cupboard.

Once Patrick knows what the cupboard can do he brings his cowboy figure (and horse) to life. The mistrust between these two tiny men leads to Little Bull being badly injured, and Omri bringing Tommy Atkins, a WW2 medic, to life briefly.

And lastly, as Little Bull has demanded a wife, Omri lets him choose a female figure to bring to life; an Iroquois woman called Twin Stars. In later books more Indians are brought to life, and other medics too.

One for Blyton fans?

On one hand I feel like there’s so much in here that Blyton could have written herself. On the other, Reid Banks has woven together some things that Blyton rarely, if ever, combined.

A magic key or piece or furniture that brings toys to life would fit perfectly into one of Blyton’s fantasy stories. Blyton has written many stories about toys who secretly come to life at night or whenever their children aren’t looking, and I’m sure there are stories about regular toys who are magically brought to life as well.

However, Reid Banks’ toys have something that Blyton’s wouldn’t – we discover along with Omri and Patrick that the toys are imbued with the spirits of real historical people. Little Bear was, or indeed is, a real Native American man from 200 years before, and so he behaves as such. He is naturally terrified of the giant Omri to begin with. He needs to eat and have somewhere safe to sleep, and of course to be kept a secret from Omri’s family. Whenever he is returned to plastic (as the key can do both) he returns to his place in the 18th century, and time passes the same for him as it does for Omri.

That takes us into territory that Blyton didn’t cover in her fantasy tales. Reid Banks begins with a wonderful fantasy which quickly becomes quite a stressful time for Omri – he has great responsibility to care for the tiny people he has brought to life, and as Patrick is rather blasé about them Omri has to battle his friend’s attitudes and actions too. Omri realises that as Little Bear and Boone (and later other ‘toys’) are real people they have to be treated as such regardless of their size. Later books also go deeper into the morals of changing historical events and the fall out of trying. There are several suspenseful scenes as the consequences of various actions are played out, and some tragedies too.

Blyton of course gave us more insightful novels than her fantasy ones (even in those the children debate whether or not their actions would be right or fair but it’s kept reasonably simple) such as The Family at Red Roofs, Those Dreadful Children, The Put-em-Rights and so on. Each of these showed children learning (often the hard way) about responsibility, consequences, respect,  justice and other moral issues.

I’ve gone over this review a few times now and can’t seem to put into words how great these books are – not without outlining multiple scenes and spoiling the story anyway. I wish I had read them as a child as I’m sure revisiting them would be as rewarding as rereading my favourite Famous Fives.

A note of caution: I am aware of some criticisms of these books regarding the portrayal of the Native American characters. I don’t have the right to say that indigenous Americans should or shouldn’t be offended by these books. All I can say is that although Little Bear may seem somewhat stereotypical to begin with (There’s an interesting article about his speech here) and that Reid Banks may have included some inaccuracies regarding specific Native American details, the book delves quite deeply into a lot of issues in a positive way.

I’ll leave a couple of articles I’ve read on the subject here, one positive and one negative so you can be more informed.

This entry was posted in Book reviews and tagged If you like Blyton, Lynne Reid Banks, The Indian in the Cupboard. Bookmark the permalink.