If You Like Blyton: The Mystery of Tully Hall by Zöe Billings

The Mystery of Tully Hall is the first novel from Zöe Billings, who I know from the Enid Blyton Society Forums and the Enid Blyton Day. If you’ve visited the forums yourself you may know her as George@Kirrin, who calls herself The definitive 78 series nut (I’ve seen her photos of some of her memorabilia and I think she’s definitely earned the right to call herself that.)

I first read this book as a Word file a few years ago when Zöe asked me if I would read it for her and give her my thoughts. Well, of course I proof-read it and sent it back with any corrections I made in red, because that’s just the sort of person I am. Then, last month Zöe self-published her book via Amazon and kindly sent me a free physical copy.

So here’s my usual (but necessary) disclaimer: I received the book free of charge but am under no obligation to review or link to it. All opinions are my own and are absolutely honest. 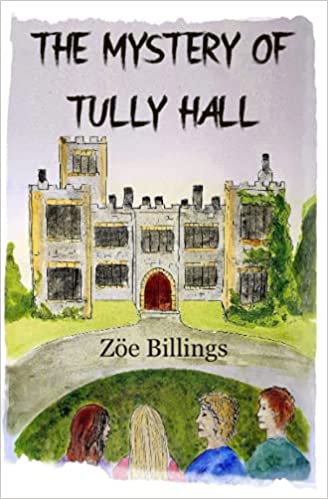 The Mystery of Tully Hall

Every old hall has a mystery or two – or at least Enid Blyton would have you believing that!  Tully Hall is no exception. It has been closed for several years but now, with a renovation underway for it to open to the public, various pieces of historic silver have been stolen.

The police have no clues – they just keep stopping and searching the builders but finding nothing – so while on a weeks’ holiday together James, Jenny, Barrie and Liz decide they are going to do their best to solve the mystery.

James, Jenny, Barrie and Liz are all in their first year at Grey Owls Boarding school, and made friends at the start of the year. Liz is the youngest at 11, and the others are 12. Despondent at not seeing each other during the holidays due to living in different parts of England and Wales, they hatch a plan to spend a week together at Barrie’s new home in Wales.

The children are very equal in this book – although Liz is a little younger and a little more hesitant at times, they all have equal input into decisions and there’s definitely no ‘we boys will go explore while you girls wash the dishes’. Of course the book is set in modern times where that attitude generally doesn’t fly!

I love the era of Blytons’ books (if I could live in a 1950s world with the internet, smart phones, other mod-cons and less of the rampant sexism and racism, then I probably would, I mean Dior’s The New Look is just fabulous even if I don’t have the waist for it) but I also enjoy books set nowadays. I think it can be hard for authors to write a modern book that captures the joy and freedom of the sort of stories Enid Blyton wrote but still include modern technology. (It’s hard to get lost on the moors with Google Maps on and so on…).

It can be tackled in different ways: The Knights Haddon boarding school bans all technology so it feels like a 1950s world, while the Adventure Island books have the children using phones and computers to look things up, and the boys argue about computer games, but they are not glued to their tech!

The Mystery of Tully Hall goes down the second route – the children all have mobiles which they use but they are not your typical pre-teens obsessed with TikTok or anything so inexplicable to me. They use their phones for Google Maps, to look up information, take photos and to keep in touch with their families. And of course – in the depths of North Wales there isn’t always a good signal when you need it!

Liz’s mobile phone is actually an important plot-point on two occasions which is a nice way of including modern technology without it taking over. Once she leaves it behind and in collecting it witnesses an important clue, and then later… well, I’ll quote from the blurb to give you a clue without spoiling anything:

With nothing but an empty bag and a useless mobile phone to save them, things seem increasingly bleak for the four friends.

All I’ll say is what they come up with using those things is downright ingenious.

I really enjoy this book – and it held up just as well on a second reading. The children are likeable and believable and while there are a few adults in the book (who ensure that safety gear is used and are the providers of many meals and picnics) they don’t get in the way of the adventuring or mystery solving. 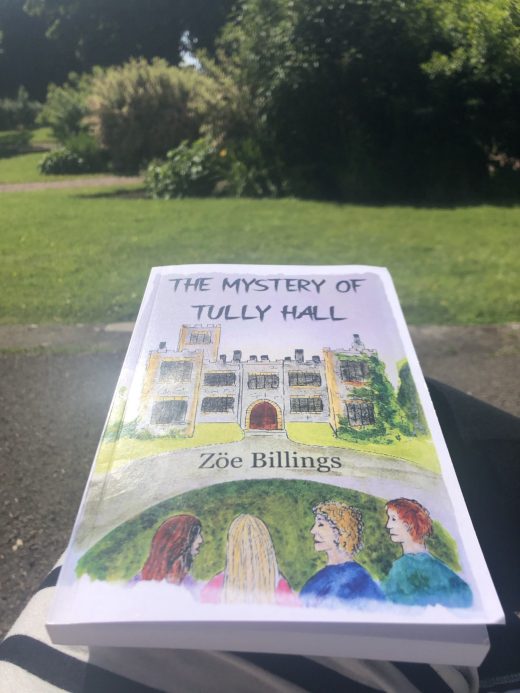 There is a mix of mystery solving/investigating and exploring/adventuring in the latter part of the book, while the beginning is full of the sorts of adventures children have purely being in a new place, so the book has a good pace without being head-long at all times. It’s like one of those Famous Five books where the first several chapters are dedicated to the Five travelling to their camp-site and eating a lot of picnics, and then with a mystery afoot things kick into a higher gear. The end chapters are particularly suspenseful as they stumble into some serious trouble.

Oh – and one very pleasant surprise is that there are illustrations – something that’s sorely lacking in so many modern books! There’s even a map, and you know how much me and my poor visual imagination loves a map!

This entry was posted in Book reviews, Other Authors and tagged If you like Blyton, The Mystery of Tully Hall, Zöe Billings. Bookmark the permalink.