If you like Blyton: The Adventure Island series by Helen Moss

Stef has already suggested this series for fans of Blyton and has reviewed the first book in the series – The Mystery of the Whistling Caves.

But that’s not going to stop me from repeating the suggestion (after all we have both reviewed/suggested Dead Man’s Cove by Lauren St John and Murder Most Unladylike by Robin Stevens). The difference is I’m going to look at the series as a whole – well, the parts I’ve read anyway.

There are fourteen books in the series, which I think is now finished as the last one came out in 2013.

The ones in bold are the ones I have read, so half the series. Much like Blyton’s books it is suggested that you read these in order, but each does contain a stand-alone adventure so you don’t have to read them from 1-14. Phew, because I’ve skipped several books due to just not owning them!

The series starts with Scott and Jack Carter who are coming to stay with their aunt on the island of Castle Key during the hols. (They don’t actually call them hols, mind you, it just sounds more Blyton-y if I do!) They are Londoners through and through to begin with, sure they will miss the hustle and bustle and have nothing to do on a boring old island.

The island differs from the typical Blyton one – it’s a fully inhabited one with a couple of shops and places to eat for a start. There are plenty of wild areas though, moors, beaches and a half-ruined castle so it’s not a total loss.

Anyway, the boys soon realise they are all wrong about Castle Key. It all changes for them when they meet Emily Wild and her dog Drift and fall into an adventure – and then, thirteen more of them over more holidays.

Scott is the older brother, he is thirteen to Jack’s twelve, while Emily starts out as twelve and ages to thirteen so she is probably just in between the boys.

Emily, whose parents run a B&B in the island’s lighthouse, is obsessed with spies, smugglers and detectives. She longs to be a detective herself and is well kitted out to investigate anything odd that comes her way, with a torch, map, notebook, recording device, camera and anything else you could think of to hand.

She is bossy like Julian, bold like George and rather like a less annoying Fatty as she leads the detective efforts. Drift acts as a Buster or Timmy depending on what the situation calls for, he can sniff out a track or fend off an enemy.

Being the older brother Scott thinks he’s too cool for a lot of things but always manages to be drawn into the silliest sounding mysteries. Jack on the other hand, is often desperate to show he can keep up with the others in the crime-busting department, even if his ideas for investigating can sound daft at first.

I’m not sure which Blyton characters I would describe as their parallels. Jack has a sort of Bets-like role at times, being the youngest but he’s not nearly as young as she is, and Scott often acts like Philip in putting down his younger sibling and scoffing at his ideas. Both boys can be likened to Dick, I suppose, as they are quite jokey, brave and energetic.

The adventures/mysteries that they have are quite far and ranging in subject. Stolen treasures, a stolen super-car, a mysterious and possibly faked dinosaur skeleton, a missing movie star, hidden gold at the end of an old treasure map, lights flashing on the moors at night… and those are just ones that I have read!

Generally they lean more towards Five Find-Outer tales, as they often form a list of suspects to interrogate or follow and they do more investigating than adventuring – though there is are a decent number of secret passages and night-time prowlings.

The Mystery of the Phantom Lights has struck me as starting out the most Blyton-like. Jack experiences a phenomenon very much like the one the girls do in Five on a Secret Trail, while camping on the moors. Well, he was returning from a toilet break behind a gorsebush (he thinks to himself that suitable facilities are rather lacking on the moors – something the Five never seemed to worry about) and at first puts the lights down to UFOs but it still had a brief Blyton-feel to it.

And that brings me to…

Unfortunately you can’t get away from the fact that these books are set in the 2000s and 2010s. The kids use mobile phones (though remarkably scarcely for the most part, as their main use is alerting each other to developments – the 3g on Castle Key probably isn’t great), play computer games and use the library computers to research things.

There are also plenty of very modern references to movies, games, events and all sorts.

Saying all that I don’t think the tech overshadows the story. The children aren’t constantly taking selfies or anything like that, but they do make use of tech instead of wading through piles of paper research.

Food is another important theme – they, especially the boys, get through a lot of it. Rather than egg sandwiches and ginger beer, it’s mostly pizzas with every imaginable topping washed down with a can of Dr Pepper or Coke though. It’s the same in spirit, especially when Aunt Kate brings out her home made cakes. (Some of her recipes can be found online even.) 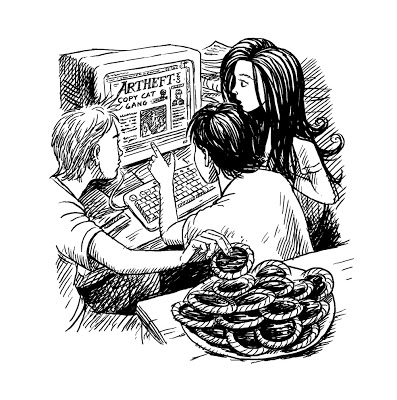 A mix of modern research and old-fashioned baking

Their police contact, DC Hassan is a modern-day Inspector Jenks and often appears in the last chapter to tie up loose ends – though he can have a slightly Goon-ish air to him if he is present in the middle of the book, he does get a bit shirty when the kids ‘meddle’ even though they always produce results.

SO WHY THESE BOOKS FOR BLYTON FANS?

So far I perhaps haven’t entirely sold these books to you. Mobile phones, Coke and pizzas I hear you cry. Well, yes… but you’re going to find those things in most children’s book set in the 21st century – unless you’re delving into a magical realm like that of Harry Potter, or a dystopian world like in The Hunger Games.

The books are fairly innocent as well, though perhaps not quite as innocent as Blyton’s. There are a few references to crushes though little time is wasted on the notion, and a few adults have a boyfriend or girlfriend but it’s not an important point. The kids themselves never date or get romantically involved – there is of course potential for either Scott or Jack to fall for Emily but thankfully that’s entirely avoided.

Modern nuisances aside, I think these books are fairly Blytonian. You’ve got your small group of kids tumbling into mysteries and resolving just about everything without much adult help. There’s plenty of fresh air, they walk or cycle all over the place, they have the odd picnic or camping session and most importantly they have a lot of fun.

Oh, and as a bonus – they’re illustrated!

So what have you got to lose? Give them a go!

This entry was posted in Book reviews, Other Authors, Reading Recommendations and tagged Helen Moss, If you like Blyton, The Adventure Island Series. Bookmark the permalink.

4 Responses to If you like Blyton: The Adventure Island series by Helen Moss