Like lighthouses I associate blackberries with Blyton, even if they only feature prominently in the odd book. For lighthouses that is, of course, Five Go to Demon’s Rocks, while for blackberries it is The Hidey Hole.

Blyton’s children always seem to be picking wild berries and so on when they are on their rambles, hikes and camps. I haven’t the time to search though every book for references for this, but I know they are mentioned nine times in The Secret Island –

The blackberries grew ripe on the bushes that rambled all over the place, and the children’s mouths were always stained with them, for they picked them as they went about their various jobs.

Nuts were ripening, too, but were not yet ready. Jack looked at the heavy clusters on the hazel-trees and longed for them to be ripe. He went to have a look at the beans. They were ready to be picked! The runners grew up the brambles, and the long green pods were mixed up with the blackberry flowers and berries.

The children pick and sell blackberries, along with nuts, in the later months, after their strawberry and raspberry crops have died back.

The Hidey-Hole is Blyton’s last full-length novel, published in 1965 and coming in at xx pages. It is not amongst her best books, her writing was definitely declining through the early 1960s. An EBSOC member once wrote in the EBSOC Journal that blackberries were mentioned 93 times in the first 8 chapters, so you can see why I associate the book with the berries!

The basic plot of The Hidey-Hole is that some children are looking for blackberries to pick to raise money for a disabled boy who needs a special trike. They try their usual spot – the common – but the gypsies have already picked all the good ones. They later find a huge crop in an old man’s garden, and get permission to pick those, and that’s where the Hidey-Hole of the title comes in, as a place some thieves hide stolen goods. 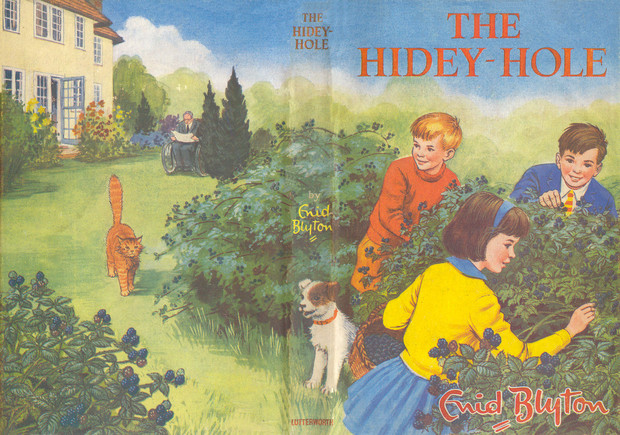 We didn’t find 93 blackberries out back (or any stolen goods), but we found enough. There were actually a lot more but they were annoyingly out of reach, spread across the brambly slope at the back of the communal garden. 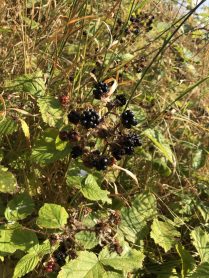 We just picked what we could reach from the steps and the bottom of the slope and our fingers were very pink by the time we were done. (We didn’t come down these steps, I thought I’d add. We came down the next set along then up these, very carefully!) 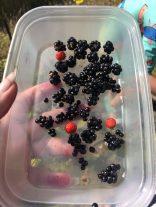 I’m sure (other than selling them) the blackberries picked in Blyton’s books would be made into blackberry crumble or some other sort of dessert to be served with custard, ice-cream or cream. I didn’t have nearly enough to do anything like that (nor the baking skills to pull it off), so we added them to porridge bars which are not entirely un-Blytonish. Porridge has a long history as a breakfast staple (particularly in Scotland) and oats have long been used in things like haggis, and in the 1950s Scott’s Porage Oats (a brand still going now) were putting recipes on the backs of their packs for flapjacks, rolled oatcakes, oat digestives and a crusty apricot pudding.  The porridge bars I make are, I suppose, are not entirely dissimilar to flapjacks. 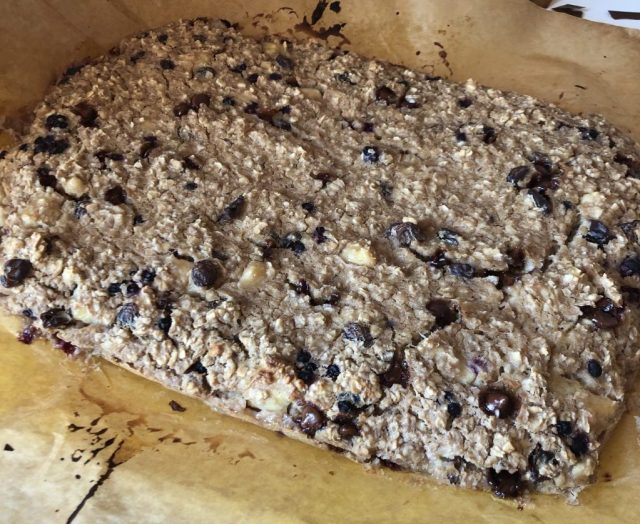 For credit this is the original recipe I found when I first wanted to make porridge bars, but I quickly changed it up to suit me.

For a start I’ve always made double as that fits well in my rectangular Pyrex oven dish (and we’re greedy and can eat that much in a few days.) My basic recipe is:

I’ve also experimented and added other fruit, like the blackberries above.

You can use tinned apple/applesauce per the original recipe or I imagine strawberries or any other soft fruit would work quite well – I quite fancy trying it with rhubarb next. That’s the beauty of this sort of recipe – you don’t have to be precise, you can throw in most things and you really can’t go wrong.

The recipe is sweet enough, I think, but you can make it more dessert like by adding sugar, sweetener, honey or golden syrup if you like. I sometimes add a handful of chocolate chips, too.

We always eat the slices cold, often for breakfast but sometimes for snack.

This entry was posted in Food and recipes, Personal Experiences and tagged Blackberries, The Hidey-Hole, The Secret Island. Bookmark the permalink.