The Boy Next Door

Posted on February 1, 2013 by worldofblyton 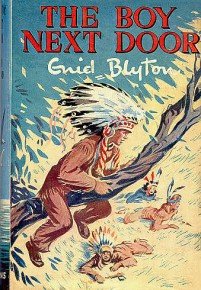 The Boy Next Door, 1951 Collins illustrated by Gilbert Dunlop

This cover illustration caught my eye on a NZ auction site. I think I might have read this as a child but my recent cataloguing of all my Enid Blyton books (perhaps worthy of a post in itself) confirmed that I didn’t own a copy. So of course I bought it!

Here are my thoughts on this story.  Please beware that it may contain spoilers – I have tried to avoid it, but sometimes I needed to illustrate my points with specific examples from the book.

The story, on the surface, is a typical Blytonian kidnapping.  Three children, Betty, her older brother Robin, and cousin Lucy are excited to hear the empty house next door has been let, and Robin in particular is hoping for a new boy to play with.  They soon discover, by climbing a tree near the hedge, that there is indeed a boy, who happens to be an excellent Red Indian impersonator!  The children quickly befriend the boy, an American named Kit Anthony Armstrong.  The children are puzzled when after being caught crawling through the hedge by “the Dragon” (Kit’s guardian) she tells them in no uncertain terms “…there is NO BOY HERE!” However, the children make contact with Kit again (through the ingenious method of hiding a note in a torn ball, which the children throw to one another over the hedge) and it emerges that he is in hiding from a wicked uncle who is trying to steal his fortune, as his father has recently been reported dead in a plane crash (there is no mention of his mother, who presumably died when Kit was very young).   Of course, the children get into various scrapes and adventures with the kidnappers, and of course it all ends happily… 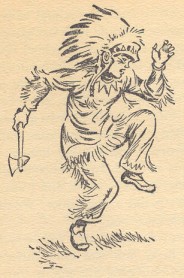 There are many Blyton stories which feature kidnappings: Five Run Away Together (where the kidnap victim is also called Armstrong!), The Secret of Spiggy Holes, The Circus of Adventure, The Mystery of the Vanished Prince to name just a few. However, I did really enjoy this story, and  think there are a few things which set it apart from the other kidnappings.

I think that in this book Blyton builds up some very interesting secondary characters, particularly “the Dragon”, or Jane Taylor. I like how her character is developed throughout the book – at the beginning she is very stern and fierce with the children when she tells them “there is NO BOY HERE”. She is also terribly strict and cross with Kit, although (certainly reading this book as an adult) you can understand why, given the circumstances with Kit at risk of being kidnapped.  Towards the end of the book the Dragon has tears in her eyes when she is told some frightening news, and praises the children for telling her: “I think you are very clever, brave children”.

Although the Dragon’s physical appearance is not described in any detail (in typical Blyton fashion, as a secondary character it would be a waste of words!) right at the beginning she is described several times as fierce-looking. You imagine a small, sharp, angular middle-aged woman, with a tight bun in her hair.  Actually, physically and in her sternness with the children masking the fact she obviously cares deeply for Kit (she cries over him as mentioned above, and she obviously also cares for his father, though this relationship is not explained) she puts me in mind a little of Miss Pepper, from the Barney Mysteries.

Another interesting secondary character who it would have been interesting to get to know better is Mr Cunningham, the owner of the houseboat.  He seems a most unusual man and it is a shame he is not developed further. When he is introduced as the owner of the houseboat, and kindly lets the children “rent” his boat for the price of a piece of Lucy’s birthday cake, the reader gets the feeling that he might be a pivotal part of future action. However, he only really comes in again at the end for the happy ending, renting the children the houseboat for a year in exchange for 52 visits! 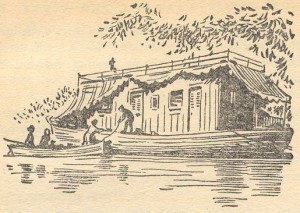 At the houseboat, illustrated by Gilbert Dunlop

I wonder though if my feeling that he might be involved later in the plot, particularly in a rescue of Kit from the kidnappers is due to his name – another Mr Cunningham, in Blyton’s Adventure series, is always the hero of the hour!  In his physical appearance (described as a tall man with twinkling blue eyes) he reminds me of him too, but all this could just be due to my crush on Bill Cunningham, and I have to concede that all Blyton’s “good guys” are described as having twinkling eyes!

I think my very favourite part of the book though is the twist with Kit hiding in the very place that the kidnappers had picked out for him! I like how the story of the children finding the houseboat to play in (exciting enough in itself) is linked in with the main story of the kidnapping. This makes the whole book feel like a very tight story, with few loose ends (I think the non-development of the character of Mr Cunningham is a bit of a loose end). It also allows for some very tense times at the end, with several very tense scenes towards the end:  the children telling the Dragon what has happened, Mr Barton overhearing where Kit is, Kit tricking and trapping the would-be kidnappers, and then being “captured” in the dark by an unexpected rescuer!

Overall, I thought this was a very enjoyable read, with a few interesting characters and points of difference to other Blyton kidnapping stories.  I’m sure this is one that I will re-read many times, and if you haven’t read it, I can happily recommend it!

This entry was posted in Book reviews and tagged Stand Alone Titles, The Boy Next Door, Written by Corinna. Bookmark the permalink.

3 Responses to The Boy Next Door