Secret Seven on the Trail – a Review by Ben

With the Seven due back at school Peter decides to call a meeting in his garden shed to say it will be the last time the Secret Society will meet until the Christmas holidays as nothing strange would happen during term time. The Seven react in understandable dismay to his decision, with Jack threatening to start a group involving six children. In exasperation a pressured Peter compromised and said that anyone who found a potential mystery could call a meeting. After the meeting the Seven go to their separate girls’ and boys’ schools and proudly show their S.S. badges off to the rest of their peers. This annoys Jack’s sister Susie considerably, prompting her to start the Famous Five a group named after Enid Blyton’s successful series.

Jack decides to hide behind a laurel bush in his garden to spy on Susie and her other members, Kate, Harry, Sam and Jeff, whilst they are having a meeting in the summer house. Little does Jack know that Susie has seen him and decides to play a trick on the Seven. The sly Susie makes out that two strange men named Stumpy Dick and Twisty Tom are meeting up in the tumbledown house on the hill. She says she and Jeff will investigate to find out what is happening on Tuesday evening. Quite amazed Jack believes every word and races off to tell Peter, who does not believe him. Angered, Jack decides with George that he will follow Susie is she leaves the house. Tuesday evening comes and Jack and George have tea with Jeff and Susie. 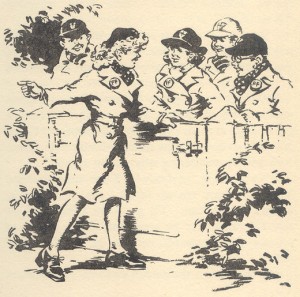 Susie and her group illustrated by George Brook

After tea, Susie and Jeff do slip out, but hide in the hall. But Jack and George don’t know this, and truly believe that they are following Susie and Jeff. Eventually Jack and George come to the tumbledown house. They get through a broken window only to hear three other men crawl in through the same window. Astonished, Jack waits for the men to go into another room in the house. There he sees three men crowded around a map and talking about points and saying six-two – seven-twenty. Trying to get closer Jack falls into a cupboard and the men, two of whom were named Zeb and Larry, turn off the lights and sit in silence to hear if there are any more noises.

Meanwhile, George is waiting in the hearth under the chimney, shaken by the darkness and deathly silence of the house. After a while he grows angry with Jack for leaving him and shouts the S.S. password “Cheeky Charlie”. To his astonishment, whilst owls hooted in the background, a torch is shone on his face and he is summoned into the other room. Here, events become even stranger as the men think George is a messenger from Cheeky Charlie, and give him a letter, asking him if Cheeky Charlie is at Dalling’s or Hammond’s. The excited George is set free and goes to find Jack, who finds him through shouting the S.S. password again.

George is mistaken for a messenger by the men, illustrated by George Brook

Relieved the pair race home anxiously wondering where Susie and Jeff had got to. To their astonishment Susie is at home with Jeff and Jack realises his sister had played a trick on the Seven. Despite this Jack and George are thankful to Susie who has inadvertently landed the Seven with another exciting mystery. Moments after George gets home he rings Peter and a meeting is called the next day. At the meeting George tells the Seven about the letter he was given. The letter contains information about a plot that had to be on a foggy night, involve points, a tarpaulin truck with a load marked in white and a lorry.

Suspecting a robbery the Seven visit the village post office and find out in the telephone directory that Dalling’s and Hammond’s were lead manufacturers, based in Petlington. Inspired, the Seven build a toy railway line in Peter and Janet’s shed, when suddenly Janet has a brainwave and works out the points the children are using must have been the points mentioned in the letter. This prompts a thrilled Peter and Colin to go down to the station where they find the same Zeb Jack had heard that night in the tumbledown house. A willing Zeb tells the children about the loads that came in from Petlington at two minutes past six on a Tuesday night, and even leads Peter and Colin up until the points which change the line.

Things get even better in the afternoon when all of the Seven follow the track and find it goes into a goods yard. Convinced they have solved the mystery the four boys decide to visit the goods yard on a foggy Tuesday night. Peter is sure a goods train will come in from Petlington and be taken on to a siding, with a hidden Larry using a lever to change the points. At the goods yard the men will be waiting to unload the marked load on to the waiting lorry. Let’s hope the Seven are right and they stop this train robbery from happening!

This book takes a while to get into. It starts quite explosively with all the bickering between the Seven about not having meetings. Jack clearly does not like this decision, and is annoyed with Peter for not believing what he had heard from Susie. Obviously Peter turned out to be right but you can see the tension between the two here, even though they are best friends. I think it is quite apparent that Peter and Jack might fall out in one of the later books. Then of course you have Susie and her Famous Five competing against the Secret Seven. To be fair, this was a good idea from Blyton, and turns out to be the main reason behind the mystery.

The tumbledown house was a great location for the strange men to turn up, and it was a nice twist for Zeb and Larry to really believe that George was Cheeky Charlie’s messenger. In this book the criminals give a real helping hand to the Seven, giving George the letter, and Zeb is perfectly happy to talk to the children about the rail line and the goods that go through it. The best moment of the book has to be Susie’s trick. I found it spiteful of Susie to lead Jack and George to the tumbledown house. It was uncomfortable when Jack started becoming anxious about where his sister and Jeff were on the way back from the house, when both of them were safely still at home. I was glad that Susie led the Seven to a mystery and they succeeded in defeating the Famous Five. It served Susie right! My wish for the next book in this series is for one of Barbara, Pam and Janet to be involved in the dangerous part of the adventures, as it was Colin, George, Jack and Peter again. Overall, the rivalry between the two societies and Susie’s trick make for an exciting read, even if the book takes a little while to get into at first. It is still my view that the Secret Seven are aimed at younger children than the Famous Five, as the plots are less complex and the Seven are also younger.

Next review: Go Ahead, Secret Seven

This entry was posted in Book reviews and tagged Secret Seven on the Trail, The Secret Seven, Written by Ben. Bookmark the permalink.