The River of Adventure

First published in 1955 this is the eighth and final book in the series. I’m going to start by saying this is my least favourite book in the Adventure Series, and I think it’s the weakest too. From what I’ve read that’s not a popular opinion, most people would put Ship or (gasp!) Circus in bottom place. Still, just because it’s the worst one for me doesn’t mean it’s at all bad. It’s a better finish to a series than say, The Mystery of Banshee Towers or Five are Together Again.

For their final adventure Bill takes the Mannering/Trent lot to a little place called Barira, which he tells the boys is ‘some way from the borders of Syria – a very old part of the world indeed. The River of the story is called ‘Abencha’ which to the children sounds like ‘Adventure’.

The holiday is partly because the children have been ill, but the choice of location is because Bill is doing a bit of reconnaissance. He’s to watch out for a suspicious fellow who goes by the name of Raya Uma.  Uma is a master of disguise, even Fatty would be impressed. He’s also clever and cunning, though he turns out to be rather cowardly in the end.

The children have two companions for their adventure. Tala is the driver of the launchboat they take down the river, and he also takes on the role of servant; fetching and preparing food etc. He is a stubborn man, and he seems to have a cruel streak too, though that is judging him on modern, Western standards. For the Middle East in the 50s, his behaviour was possibly more acceptable.

The other new character is a boy called Oola. The children rescue him from his cruel snake-charming uncle, and he becomes like a shadow to Philip who he worships. 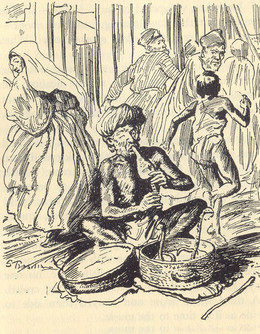 It turns out that Bill doesn’t even have to look very hard for Raya Uma, as he turns up of his own accord! He invites Bill and Allie to dinner and they accept, and the children are then tricked off the launch by Uma’s servant. When they get back, the launch is gone, along with Bill and Allie!

The children, Tala and Oola appropriate Mr Uma’s boat and head down river in pursuit, heading for a place called Wooti. Unfortunately the river becomes very wide, and they float down the wrong side of it, missing Wooti altogether. The river then splits, and they find their boat hurtling along a very narrow gorge.Thanks to Tala they narrowly avoid falling down an underground waterfall. The boat is useless now, they cannot pilot it back up the fast-flowing river and so they are forced underground, through old tunnels and down some dangerously crumbling stairs until they find themselves in a treasure-vault.

Dangerous times on the boat

Raya Uma has laid claim to the treasure and is most displeased to find the children have found their way in through a back door. It’s then up to the children along with Tala and Oola to defeat Uma and his men, escape the underground temple and rescue Bill and Allie.

Philip has possibly his most unpleasant yet most useful pet in this story, a poisonous bargua. Well, it’s not actually poisonous, the poison ducts have been cut, rendering it safe, though it will not survive more than a few weeks. It is Oola that presents Philip with the snake, after seeing him admire the snakes belonging to his uncle, the snake charmer. Those snakes, however had their mouths sewn up, to make them safe. Philip thought this very cruel, which is why Oola had his snake made safe a different way, one which Philip actually found just as cruel. He only agreed to keep the snake as he knew it would not survive defenceless in the wild. Of course, to look at, you could not tell the snake was no longer poisonous, so he comes in quite handy a few times. Unusually, the bargua doesn’t get a name or much of a personality, unlike many of Philip’s other pets.

I’m not really sure what my favourite part of the story is. Probably once Bill and Allie are out of the way and the children are having to fend for themselves, sailing down the river, not knowing where they are going.

There’s not much worth saying about the family dynamics for this book, nothing has changed since Bill and Allie got married. the six of them are still a family, Bill’s still Bill and Allie’s either Mother or Aunt Allie depends on which of the children is speaking.

As I said, this is my least favourite of the series, though I’m actually hard-pushed to say exactly why. I’m not sure if it’s that the exotic location doesn’t do it for me, or that various parts seem like re-treads of other stories (rescuing Oola reminds me of Philip rescuing Mickey in Ship, and Uma luring Bill and Allie away is a bit like when they get, well, lured away at the start of Circus)… but there are definitely a few plot-points which grate with me.

For a start, why does Uma take Bill and Allie away, then lure the children off the boat and then take the adults BACK to their own boat to kidnap them? He could just have taken them off in his boat or a car. Likewise, what was his servant planning on doing with the children? And why were they silly enough to believe Bill would let them go off to the village wedding right after he said absolutely not? It’s also a little disappointing that Uma turns out to be such a baby in the end.

And with that bit of complaining, we’re at the end of the series!

Stef has also reviewed this series, her introduction to the series is here.

This entry was posted in Book reviews and tagged The Adventure Series, The River of Adventure. Bookmark the permalink.

5 Responses to The River of Adventure