Posted on October 9, 2013 by worldofblyton

I was lucky enough to have a recent trip to the UK from New Zealand, and the very first catch-up arranged was with Stef!  Having equally well-organised friends is definitely very useful.  Since she lives vaguely out that way, and I fancied the idea of a wee respite from London, we decided to meet up at Marlow and go from there to Bourne End. 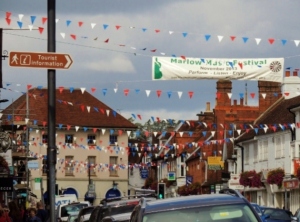 Marlow under bunting by Stephanie Woods

Marlow is a very pretty little town, and had festive bunting up in the streets.  Stef had been told there were some very good second-hand book shops there too, so we had high hopes for finding some gems.  However, we must have looked in every single charity shop on the high street, to no avail.  But perhaps it was just as well, really, as I would have had to somehow squeeze any books into my luggage!

We then took the short drive to Bourne End, parking up down by the Spade Oak.

The Spade Oak (from Trip Advisor)

By then it was lunchtime, and in true Blyton fashion, we were famished!  Our hearts sank into our boots as the cheerful waitress said that they weren’t quite ready to serve food yet… apparently they had a fire in the kitchen that weekend and were in the process of getting the all-clear from the building inspectors literally right then!  However, some crisps and a refreshing drink, not to mention a bit of banter with the lovely waitress, kept us going until the food arrived – and, as usual, it was lovely.

Of course, a fire in the vicinity immediately put me in mind of the first Five Find-Outers (and Dog) book – The Mystery of the Burnt Cottage.  Of course, the fire was across from the inn, not in it, but still – I’ll take any Blyton link, however tenuous!

After lunch we set off on Stef’s usual walk along the Thames path.  Stef stopped many times to take some of the lovely pics you can see here.  I was her helpful assistant – holding the tree leaves when they were moving too much in the wind!  I also befriended some of the local wildlife (channelling Jack Trent or Philip Mannering from the Adventure series, maybe?)…

Chattering along the way, Stef convinced me to do a couple of blogs – this one, and an upcoming one about parenting in Blyton’s books (we almost came to blows over that one – you’ll see when I eventually write it and you get to read it).  We also had a good chat about our joint fan fiction, affectionately nicknamed “Kirringham” (can you guess the two major Blyton characters it is based on?) which may or may not see the light of day on this blog.

I take great delight in provoking Stef (as all good friends should), and my comments along the way included “Julian’s mother was a terrible parent” and “Julian is all right, I suppose, but boring – I couldn’t be bothered sitting down and having a beer with him”.  There’s nothing like a bit of Julian-bashing amongst friends!

Eventually though we had to head back to the car for Stef to drop me off at Reading train station.  We had an absolutely lovely day, and I was very, very sorry when it came time to say goodbye.  But, as much as we all look back with nostalgia (can we be nostalgic about a time over  30 years before we were born?), on the days when children roamed the countryside having adventures and solving mysteries, there is one very good thing about today’s world.  That is the ease with which we can keep in touch with each other, though cheap, fast, real-time communications.  Stef – I look forward to our next Skype date!

Note: all photos are by Stef, as my camera had helpfully run out of batteries!

Corinna outside the lych gate of Old Thatch 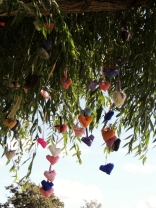 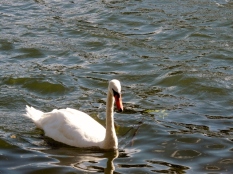 Down by the boats 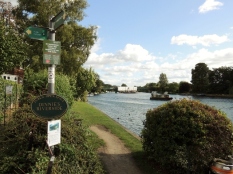 The view from the bridge

The sun setting over Bourne End

Stef and Corinna at the end of the day

This entry was posted in Personal Experiences and tagged Bourne End, Marlow, Old Thatch, The Mystery of the Burnt Cottage, Written by Corinna. Bookmark the permalink.

3 Responses to A Blyton-y, Blog-y Bourne End Walk! by Corinna