So I’ve just travelled up to Scotland to stay with Fiona for a week, so I’m writing this blog on the train to pass the time (it’s either that or you get something cobbled together at half ten this evening, when I’m not even sure I shall be able to string a sentence together!)

My blog for this week will be looking at The Famous Five Diary by Mary Danby. It was published by Knight books in 1988. The tag line at the top of the book claims “Have the most Adventurous Year Ever…” which is an interesting title. 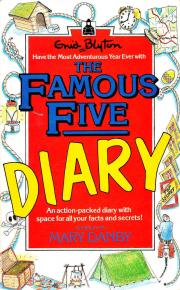 I got my copy from a small second hand bookshop in Alton, Hampshire, for two pounds, so it wasn’t a bad buy. Its not something I had ever thought of owning. In fact I had thought that they were incredibly rare. Now I’m not so sure. There are a few copies on eBay, but not many, so maybe I picked up quite a gem.

It’s a funny little book really, not like a proper diary. There are little boxes for you to write in, randomly spaced on the page, but the gaps are filled in with little notes about nature, jokes and contributions, apparently from the famous five.

The feel of the jokes that the book contains are what you might class as ‘bad’. January for example has “what is the coldest form of transport?”A b-b-b-b-b-bicycle!”, so its that kind of bad. There aren’t too many jokes mind, so that’s a relief. I can’t imagine the Famous Five telling jokes that are quite so awful (but there is no accounting for Dick’s sense of humour after all!)

Danby includes little puzzles as well as the jokes. From what I’ve read they don’t seem very Blytonesque. Danby doesn’t seem to be very good at mimicking the style of Blyton. It may of course be the format doesn’t allow for much fluidity to get into the style, but any good writer who is taking on such well known works, should be able to work with whatever the format is.

A sample of pages, taken from a lovely blog over at Vintagecobweb’s website.

You may have heard the name Mary Danby before, and you would be correct in thinking that she has a Blyton connection. Danby is the author who wrote the “Famous Five and Me” books, where you got parts of a Blyton story, such as Adventuring Again, and then added different ‘paths’ into the stories and you have go pick the right way to go to find out the story. I only remember coming across these when I was about twelve or thirteen so I have only a hazy memory of them, but I can remember not being impressed (Which is odd because I did like one of the Claude Voilier books, The Famous Five and the Black Mask). So imagine my surprise when I realised that Danby had written other Blyton related things.

To give you an example of something that doesn’t feel very Blytonian is the passage that is on today’s date.

On July 20th 1969, man first set foot on the moon. As Apollo XI spacecraft commander Neil Armstrong stepped out of the landing module, he said, ‘That’s one small step for a man- one giant leap for mankind.’

It’s a strange fact to put in the book, I mean I conveys a sense of adventure but is it in keeping with a Famous Five diary?

Another thing that comes with the diary is that there are a few extracts from the Claude Voilier novels, I can’t seem to find the right page now, but its only half a page worth of the opening passage. I am assuming that because these books are done by Knight, that Chorian didn’t give them publishing rights to print passages in the diary.

It has a nice recipe for ginger beer in the October part of the diary, one of the few different recipes in the diary, though I’m not entirely sure that they are seasonal.

I shall share the recipe for brewing your own ginger beer for those of you who wish to try.

So there is the recipe for the diary’s ginger beer, if you do try it, please let me know how it turns out.

So overall the diary is a nice thing to have, it has the added bonus of not having days and years in it, meaning it can be used for any year. I wouldn’t use it because it’s in a book form, and I was always taught not to write in books

I think  I was lucky to come across it, and for a good cheap price, but I certainly wouldn’t have brought it for any more than two pounds. That is just my opinion, it’s a nice edition to my collection for sure. Do you have one? Do you like yours? Let us know!

1 Response to The Famous Five Diary