The Folk of the Faraway Tree review by Laura

Posted on October 1, 2014 by worldofblyton

This is the last book of the three Faraway Tree books (published in 1946) and there’s a bit of revisiting past adventures, either through remembering them or with another visit to Dame Slap’s school and her ridiculous questions for her students – why is a blackboard?  But Enid Blyton certainly hadn’t run out of ideas for the tree, the children and her friends. 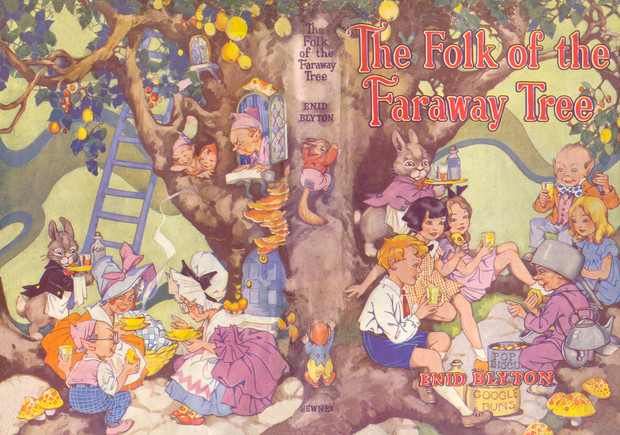 This time she livens things up by introducing Connie, nicknamed Curious Connie by Jo because she can never stop poking and prying into things. She has to stay with the children and their mother (I assume their father is still around, he just hasn’t been mentioned since the first book) as her own mother hasn’t been well and needs to go on a long holiday, once again providing an excellent reason for a new character to appear (there was a similar reason given for Cousin Dick coming to stay).

Connie always seemed more interesting to me than the other children, even before she arrives, because there’s the promise of some tension: the children aren’t very happy about her visit and, even after they’ve been persuaded by their mother to help others, keep imagining how Connie will react to the Faraway tree and its folk, not to mention vice versa – especially the Angry Pixie. This offers the readers a bit of a recap, as it’s a good opportunity for them to talk about their earlier adventures and some of the lands they visited, as does Connie’s arrival soon after.

So, Curious Connie has been built up to be a spoilt brat and she doesn’t disappoint – no-one has ever told this child not to take the last bun at afternoon tea! And she simply refuses to believe in the Faraway Tree, any of the people who live in it or the different lands that arrive at the top. So when Moon Face arrives with an invitation to tea, she’s put in the difficult position of agreeing to have tea with someone she doesn’t believe in. She decides to think of Moon Face as a dream… and he says he’ll do the same, but he hopes she isn’t a bad dream! 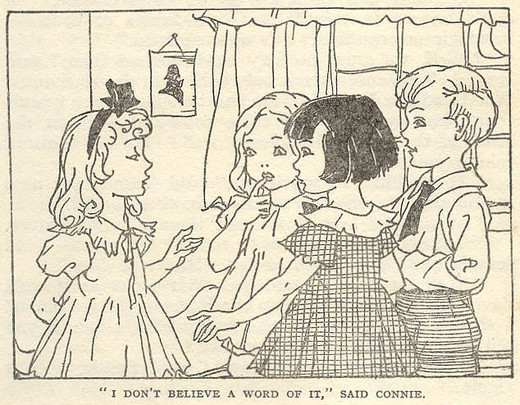 She might not believe in the tree, but Connie still insists on wearing her best dress to tea and, rather predictably, annoys the Angry Pixie so he throws ink at her and then gets caught by Dame Washalot’s water. She also offends Saucepan Man and lets her curiosity literally take her down the Slippery-Slip – it’s a wonder that they decide to rescue her when her curiosity eventually gets the better of her again and she disappears with the Land of Marvels at the top of the tree.

Like the first book, there are a lot of nursery rhyme and fairy tale references – they have to go by train (which the children seem to have forgotten from their earlier adventures) to visit Jack and his bean-stalk to get into the Land of the Giants to get Connie back. And their next adventure takes place in the Land of Nursery Rhymes, with Jack and Jill, Miss Muffet and a rather ill spider.

Connie gradually gets better throughout the book – when they all accidently offend Saucepan Man about his mother working for Dame Slap, she’s the one who thinks of how to make everything right again. However, she still makes a big mistake in the Land of Secrets, prompting a visit to the very dangerous Land of Enchantments, where they nearly lose several of their group for good.

There’s another serious adventure close to the end of the book – the Faraway Tree appears to be withering up and dying – and a visit to one of the more pleasant lands at the end as a reward. The Land of Treats was always one of my favourites – I loved the idea of an ice-cream man who could produce any flavour you ask for. Connie is still a bit sceptical, even after everything she’s been through, and asks for sardine ice cream. Naturally she gets it and has to give it to a cat, as she certainly can’t eat it herself.

There is also a roundabout with live animals – giving Saucepan Man one final chance to cause a bit of chaos; he was more sensible in this book apart from insulting Miss Muffet’s spider – balloon rides and a circus with a magician. Everything, in fact, that a child might wish for in this land and a great end to this three-book series.

We also have a review of this book by Poppy.

This entry was posted in Book reviews and tagged Faraway Tree Series, The Folk of the Faraway Tree, Written by Laura. Bookmark the permalink.