In my head and on the schedule I’ve got the Short Story Collection marked as a one blog post affair. As it turns out (and this will have been obvious to most) it’s still a two CD set and the running time is about two hours – same as all the other CD sets. With that ‘new’ information added to the equation I’ll be doing one CD today and another in the future. Glad we got that sorted! 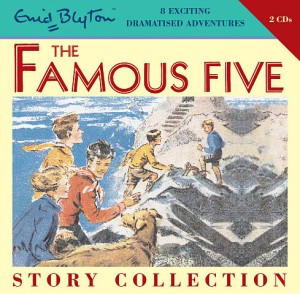 The cover which is from Five Go to Demon’s Rocks

CD one has Five Have A Puzzling Time (which is the title of the Red Fox collection), When Timmy Chased the Cat! and George’s Hair is Too Long!

Looking at the times of the three chapters on CD one I can see that Five Have a Puzzling Time is just over forty minutes long while When Timmy Chased the Cat is twenty, and George’s Hair is Too Long is just fifteen minutes. I think I remember Puzzling Time being one of the longer short stories in the collection, but it will be interesting to see if the others have been rushed. With five tales on CD two they must all be under fifteen minutes as well.

But anyway, on with the stories!

As with the other CDS the narrator is Nick McArdle though the five themselves seem to have changed around. I can’t quite identify which cassette tape(s) these recording originally came from as there are a couple, so I can’t confirm the voice details. It’s the same cast for all three stories though.

I think Anne and George are voices I’ve heard before but perhaps swapped around. George sounds a little more feminine than usual, though she still sounds very stroppy, determined and George-like. Anne’s perfectly fine though a little hoarse at times.

Uncle Quentin and Aunt Fanny are voiced differently than what I’ve heard before. Uncle Quentin is a bit soft and lacking authority. He doesn’t sound like someone the children would be afraid of even when he is ticking them off. Aunt Fanny is warm and pleasant however.

I’m afraid to say that Julian and Dick are quite awful. Julian is worse as he lacks presence and authority and often comes off as whiny (particularly at the start of When Timmy Chased the Cat and he’s talking about the bad weather.) Dick sounds very like him and at first I had trouble working out if Dick had even spoken. Neither of them sound anything like Julian or Dick should though it’s hard to describe how they sound. Both speak with a posh English accent but it just sounds wrong. A bit nasally and whiny is the best I can describe it. It doesn’t spoil the stories as such but it doesn’t endear me to them either.

As with the other CDs we get a range of voice acting.

In Five Have a Puzzling Time we hear Joanna, Bobby, Chippy, Chummy and Grand-Pop. Both Timmy and Chummy are well ‘voiced’ with barking, howling and whining and Chippy the monkey is convincing too.

From what I can tell the story is pretty much complete, though I’m not nearly as familiar with it as I am the full length novels. It doesn’t seem to me as if anything was cut though of course parts must have been altered to suit having a narrator.

In When Timmy Chased the Cat there is also the daily woman at the house and the elderly lady they rescue. The daily woman sounds suitably lower-class to the five and the elderly lady definitely sounds elderly though she perhaps lays on the gratitude a bit thickly. The radio is done well, with short blasts of talking and music to add to the dialogue. As it’s night time there’s also some owls hooting in the background to set the scene.

Again it seems like the whole short story is present here, and there weren’t any changes or even updates that I could spot.

I’m going to admit now I didn’t pay as much attention to George’s Hair is Too Long as I did the other two. (I blame the tonsillitis and lack of sleep.) Anyway I did hear Mr Pails (though he sounded very odd when attacked – almost as if he was being choked) one of the criminals sounding suitably angry, aggressive and threatening and also a man towards the end who’s name I didn’t catch as he came to rescue George and Mr P. I also noted some good van-driving and horn beeping noises. Thankfully this is one of the CDs with a good and realistic sounding Timmy – that’s important when he does a lot of barking.

So although on the whole this CD is produced to the same standard I can’t say I enjoyed it quite as much. I suppose I don’t enjoy the short stories as much as the full-length novels anyway, as they are so short and they lack the same nostalgia factor. Also the boys’ voices just didn’t work for me, which is a pity.

They’re still worth a listen though and it is good that they’ve done dramatisations of these short stories. I don’t think they’re particularly well-known by a lot of people.

If anyone’s interested I’ve written synopsis of the short stories here and here.

This entry was posted in Audio Books and Audio Dramatisations and tagged Five Have A Puzzling Time, George's Hair is Too Long!, Short Stories, Short Story Collection, The Famous Five, When Timmy Chased the Cat!. Bookmark the permalink.