The Twinniest Twins: The Harries from Five on Finniston Farm 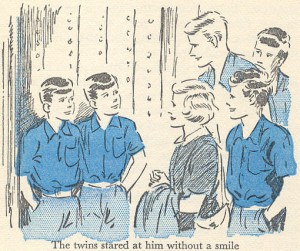 The Five meeting the twins for the first time. By Eileen Soper.

“They’re the twinniest twins I’ve ever seen!” Laura Petela as Anne remarks of the Philpot twins in Five go to Finniston Farm. Now I admit in the book this has more of an effect because your imagination fills in the blanks, and you can see the twins as being identical even though one turns out to be a boy and the other a girl.

The “Harries” as they are known, are one of the so-called flaws in Blyton’s writing. I can hear you crying out now at your computer screens “There is no such thing as twins of different sexes who are identical!” and on some level I agree with you. However after extensive search of the Enid Blyton Society forums to find a discussion on the subject, I ascertained that it is possible, if quite rare to have identical fraternal twins if the egg splits early enough in the pregnancy to develop two placentas!

Monozygotic twins can develop differently, due to different genes being activated. More unusual are “semi-identical twins”. These “half-identical twins” are hypothesized to occur when an unfertilized egg cleaves into two identical attached ova and which are viable for fertilization. Both cloned ova are then fertilized by different sperm and the coalesced eggs undergo further cell duplications developing as a chimeric blastomere. If this blastomere then undergoes a twinning event, two embryos will be formed, each of which have different paternal genes and identical maternal genes.

So there is this to factor into the argument for Blyton’s use of identical fraternal twins. However, the question remains, where did she know this piece of information from? Had she come across it when she was teaching? Or did her second husband Darrell Waters know all about it?

The other option of course is down to a writers prerogative, in other words poetic licence. Options that have been thrown around for discussion on the Enid Blyton Society forums include not only the scientific theory I have explained above but offer theories such as the Harries being prepubescent which would account for them being able to look so alike.

Officially fraternal twins are no more alike than any other brother and sister, but that does not mean that they can’t look similar. If you factor in the that fact that neither Harry or Harriet are at the age where their bodies would be changing, they could indeed look similar. There are a number of young girls with their hair cropped close who could pass for boys, and look like their brothers. In fact, I once had short hair and looked like a boy during my primary school days.

The twin debate does rage on, die off and come back again with frightening regularity. Its a shame we just can’t ask Blyton where the idea comes from, as the fraternal twins do crop up in other books of hers, and with her contemporaries as well, such as Malcolm Saville’s Morton twins, Mary and Dickie. 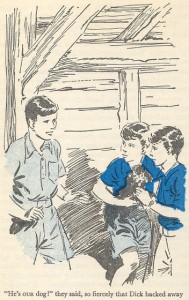 The twins look after their dog Snippet by Eileen Soper

Now moving on from the “are they or aren’t they fraternal twins” debate, we can take a closer look at the Harries.

Henry and Harriet Philpot are hard working, loyal, fierce and utterly devoted to those they hold dear and their farm. It does take a trick played on Junior, the son of the house guest Mr Henning, for the Harries to open up and start talking to the Five and trusting them. Until then they’re sullen and withdrawn, hoping their unpleasantness will drive the Five away from the farm which means their darling mother wouldn’t have to work so hard.

However the Five float above that with ease and carry on as they do without the friendship of the twins until the joke is played on Junior.

After that however we don’t really see much of the twins, because they get overshadowed by the Five, as many of the supplementary characters in the Famous Five books do, and become background characters because they’ve dropped their guard.

Even though I see the twins as much the same age, or younger than Anne, there is no question of the fact that Harriet shouldn’t accompany the boys and George on their expedition through the tunnel to the chapel and the treasure. (This is especially evident in the TV series where Anne stays behind because she’s scared. Harriet [played by Leanne Rowe] is allowed to join the others but eventually admits that she’s scared when they are down in the passage.) The twins have their uses however, knowing where various parts of the old buildings once stood and having access to farm tools and things, but they just become bland and unexciting when they become nice, which is a shame.

Anyway, I don’t think that matters really, because the twins are still two of my favourite visiting support characters in the books. I think there is some fascination with twins that piques our interest especially where they are described as identical but can’t really be! I must say however that the twins, Guy and Harry Lawdler in Five on a Secret Trail don’t really interest me as much, and in fact seem rather silly and less mature than the Harries.

So that’s my look at the Harries, but I’m interested now; who believes that Blyton knew identical fraternal twins existed or do you believe that she was using her poetic licence as a writer? 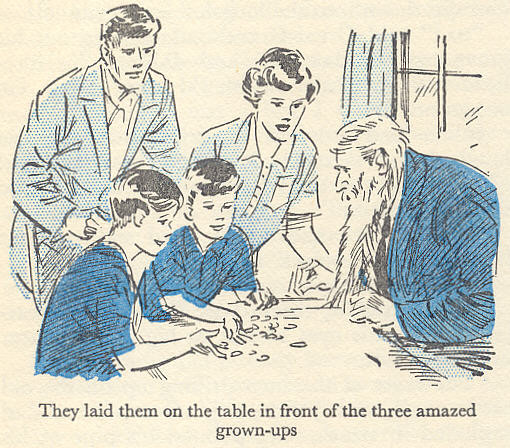 5 Responses to The Twinniest Twins: The Harries from Five on Finniston Farm