I, like Fiona, have not managed to bring you the promised blog this week. I really need two weeks head start to finish a book in time at the moment and what with one thing and another (extra shifts at work, interviews, meetings etc) I haven’t had chance to even start The Circus of Adventure, so you’re getting a review of Five Fall into Adventure 90s style instead.

So to start off, I’m going to make myself sound like a parrot and say that like most of the other episodes, and I’m afraid that this one needs it most of all, we needed at least two episodes. Two twenty-five minute episodes to really, really get all the juicy detail and plot twists and turns out of it. Its rushed, its lacking elegance. We barely get to meet Jo the Gypsy girl before we’re expected to trust her implicitly.

Also, I’m sorry, Jo and George look nothing alike in this adaption (And if I’m honest, they looked nothing alike in the 70s adaption either). It would take some stretch of the imagination to think that Jemima Rooper (George) and Vanessa Cavanagh (Jo) to be described as almost identical. Some of the jokes that Blyton has Dick and Julian say in the book fall flat on their faces in the TV episode because of this stark difference between the girls. 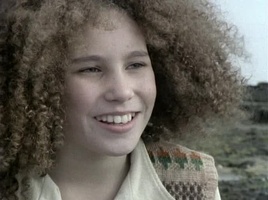 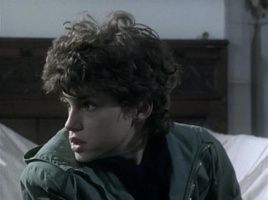 We start off the episode, getting a good look at Red Tower, and we’re in no doubt that this menacing looking man is  villain, and up to no good. Actually all the villains in this episode are well done. Simmy and Jake are not comic as Perton was in the last episode, Red Tower is creepy and frightening and Markoff is downright scary. In fact he’s probably the scariest of them all! I think its such a shame we didn’t get to see more of them, and get a chance for them to really settle into their characters more. This could have really made the episode ten times better.

Five Fall into Adventure is one of my least favourite books, and that’s only really because it takes so long to get going with any real vigor. The arrival of Jo is fairly late on in the book, and her real significance isn’t known until much later when George and Timmy disappear.

What we also lose in this adaption is the growing fondness between Dick and Jo after the initial conflict where he mistakes her for a boy and gives her a bruise on her chin when he punches her for trying to take on George. For the time we have, Paul Child and Vanessa Cavanagh do very well, even though Cavanagh’s Jo remains quite aloof and prickly, whereas in the books, Jo begins to really trust and connect with Dick. I think as well as needing the time to set this up, what was really needed here was a bit more maturity in both actors, I think in the second series they could have managed it much better, and produced a much better result. A lot more of a believable result as well. Some people like to imagine a hint of romance with Dick and Jo from what’s said in the book (I’m afraid I disagree) and you really can’t get that feeling from the episode.

Another point about the actors needing to be older: Julian in the books has a lot of responcibilty given to him as his Aunt and Uncle have to disappear to Spain for a holiday and Joan/Joanna the cook looks at him to assume the male role in this house – such as locking up. I also think that Fanny and Quentin are expecting him to step up to the plate as well, and be in control. In the book he does this very well (he’s a mature for a 16 year old (its mentioned in the earlier editions of the book how old he is)) but I’m afraid to say that this falls short for Marco Williamson. Williamson does his best but unfortunately this is something that would have been more authentic in the second season because he not only would have looked more the part but had the grandeur to carry it off.

For one of my least favourite books I do feel that this episode is well structured and well turned out for the time frame that they have. There is just too much to fit into one episode however, like many other of the episodes we’ve had a look at. I don’t think that there is a Blyton fan out there who would disagree with me.

Anyway, view the episode here, and let me know what you think! Happy viewing!