The River of Adventure

I know it’s been a while since I have reviewed any of the Adventure Series books but I know where I got up to, and that was River. So without waiting another second it’s time to have a look at the final Adventure series book and find out what trouble Philip, Jack, Dinah and Lucy-Ann get up to.

I think its fair to say that River of Adventure is possibly one of the weaker books of the series, and in the same vein as Five are Together Again, it tends to be the least favourite of the fans. The plot does tend to feel like a mash up of previous ones, the children being unable to go back to school, the unexpected trip out of town with Bill and in this case Aunt Allie, the bad guy is searching for an underground treasure and the adults are conveniently captured so the children can go on and find the treasure trove by accident.

It’s a fairly standard end of the line plot really, it is as if Blyton couldn’t find an further ways to grow her characters and find new adventures for them. I’m a bit hazy on her personal timeline but a quick check on the Enid Blyton Society website tells me that it could be understandable that Blyton was a bit distracted at this time as she was having to start legal proceedings to stop the rumours that she didn’t write her own books. In that instance we could probably forgive her for being a little less absorbed in coming up with adventures for her books.

Anyway back to the adventure; the whole reason for the children being anywhere near this middle eastern ‘river of adventure’ is because of Bill and his work. He is tracking someone called Raya Uma who is a jack of all trades as far as criminal business is concerned and is after some highly valuable treasure that is apparently hidden in the desert. Bill takes his wife and the children for his cover, to appear to be a family man on holiday while doing all he can to catch Raya Uma. However as I’m sure you can guess, best laid plans and all that, it all goes wrong for Bill and Aunt Allie as they’re kidnapped by Raya Uma and his men.

The children then ally themselves with the boat driver and a young boy from the local ‘sinny-town’ (Cinema town, you know a big fake place like on a Hollywood movie set?). During this excitement Philip ends up with a poisonous snake that has had its venom ducts removed which means it is essentially harmless, and avid readers of the book will know that the snake does save the day.

However back to the plot. I must admit I didn’t ‘gel’ with it, it was very sporadic when moving from scene to scene and although it had been touched by Blyton’s magic, the fact that once again the children had managed to find undiscovered treasure had lost its shine by this point. The plot is overused and sloppy in places, the motions are just that, motions. There is nothing new to surprise the reader, especially if they have read all the others. As usual I may be being too hard on it as its a children’s book and I am an adult (how I hate admitting that), but I think even as a child I knew when a book didn’t quite fit in. I knew that Five as Together Again was not as strong and instead was quite boring compared to the others, and its the same with The River of Adventure.

However I know that any book written by Blyton has a magic about it, and that’s not to say it’s well written but it just doesn’t sparkle as much as the others. You may disagree with me, and you may like to fill me in on what I am missing! I just think that the last book of Blyton’s series are the ones that suffer most from over used plot lines and predictability.

One last point on River of Adventure is that if you look at the first editions or at least those published before 1953 Kiki, our favourite parrot, would screech “God save the King” quite happily. In River this changes to “God save the Queen” as it was two years since Queen Elizabeth the second had been crowned and the phrase was changed to fit into the times. However I’m not too sure how well you could convince a parrot like Kiki to change her favourite saying, but if anyone could it would be Jack and Philip.

So there you are, those are my thoughts on the River of Adventure. What do you think? Do you agree with me or not? Let us know in the comments or write us a blog saying why not! 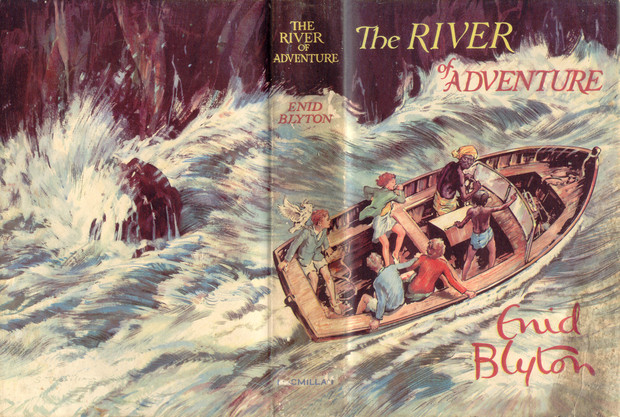 5 Responses to The River of Adventure