It has taken a little over a year, but I have now reached the last of the 24 books that make up the main and original Noddy series. I started with the second book and I am finishing with the eleventh as I was far too impatient to wait until I had all the books before I began reading and reviewing. Of course there are many, many more Noddy books out there. Big books, board books, picture books and more. So after this I’m sure I’ll be back with something else Noddy related. 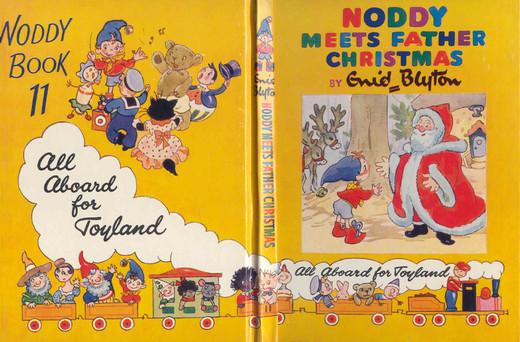 Noddy Meets Father Christmas naturally sounds like a very seasonal book which probably should be restricted to December readings. In reality, though, it’s not nearly as Christmassy as you might expect. It isn’t set at Christmas, for one. Father Christmas is visiting Toyland not to deliver his presents to all the good toys but to select the toys he will then deliver to the good boys and girls of the world. Actually, when you put it like that, it sounds a bit like a horror story of this robed man swooping down and stealing Sally Skittle’s children or Noah’s animals.

On his visit Father Christmas is to have supper at Little-Ears’ toadstool, Little-Ears being Big-Ears’ brother. Noddy isn’t invited, though he wants to go along just in case he can get  a glimpse of this Most Important Person. He comes up with a song all about it and Big-Ears tells him he can sing that outside the house during the supper party, along with some other Toyland folk. The performance is such a success that Father Christmas comes out to speak to them all and ends up deciding that Noddy can drive him around Toyland for a few days instead of him using his bumpy old sleigh.

First up is a trip to Bouncing Ball Village, as Father Christmas wants to complain about the bouncing balls he gave out last year – it seems some have already lost their bounciness. Chief Bouncer takes this very seriously and declares that all his bouncing balls will be given proper bouncing lessons before they can go off and be presents.

Then it’s off to Golliwog Town (presumably replaced with Toy Monkey Town or somesuch in new editions) to give praise as the boysand girls have loved their gollies. Rocking-Horse gets a request for smaller rocking-horses as people have less room now, then it’s a night in Humming-Top Village, a drive to Wooden-Engine Village then Doll’s-house Town (where the dolls are told to learn better doll’s house cleaning skills) and then to Skittle Town.

After all that, Father Christmas wants to go to N. & B. Works. Even he doesn’t know what that is, other than it having to do with new toys. And here’s where it all becomes rather Inception-like. This unknown place is manufacturing Noddy and Big-Ears toys, as the children have asked for them!

“Well there are lots of books about me,” says Noddy.

Maybe it’s just the head-cold I have right now, but that last bit makes my head hurt! Best not to spend too long trying to figure it out. Not an awful lot happens in this book, though. Noddy and Big-Ears discuss the visit, get themselves spruced up, Father Christmas arrives and they make half-page visits to the different towns and then they have a feast at the end. It’s not a page-turner by any means.  I’m glad to know that Noddy Meets Father Christmas is suitable for all-year round reading, at least.