I thought I would break up the TV series reviews a bit and bring you something different this week. I decided to go through some of Blyton’s well loved animal characters and look at my top five. I’m going to do a count down of them now, and I hope you’ll tell me in the comments who your top five animal characters are!

5. Button the fox from The Castle of Adventure

Buttons is one of the animals that appear ever so briefly in the Adventure books but I think the biggest reason he comes up as a favourite is because he is a little different and he is the first animal who really plays a part in the adventure the children find themselves in (apart from Kiki). He finds the second way into the castle they explore and tends to be quite helpful, even if Kiki doesn’t like him. I have always had a soft spot for foxes and a baby fox like Buttons would do me very nicely please!

4. Buster from the Five Find-Outers

I am a late comer to the Five Find-Outers books as all of you know but Buster is fast becoming my favourite Find-Outer. It helps that he is a Scottish terrier and I have a soft spot for them, ever since being introduced to Malcolm Saville’s Lone Pine Adventures and Macbeth the Scottie. Buster is basically every trait of a Scottie dog personified as well as Blyton’s own doggie traits she injects into every canine character; loyal, devoted, brave, and a defender. Such a funny little dog as well when he goes for the cats and Goon. I haven’t read all his exploits yet, but I look forward to getting to know Buster better.

3. Pongo from Five Go Off in a Caravan

Now there are quite a few ape characters I could have picked as a favourite, but Pongo was one of the first Blyton animals I came across. When I was younger I got given a set of four Famous Five stories on cassette tapes and the mischievous and loyal chimp always appealed to me. He loved Nobby from the bottom of his heart and went through so much to try and save him, when he got stuck under the caravans in the caves with the children, Pongo (with his bleeding head) made his way upstream through the river to find Nobby because he knew the boy would look after him. Pongo also saved Nobby from a horrible beating from Lou and Tiger Dan. Pongo made me want a friend like him, and showed me for the first time what love and complete and utter devotion is. I dare you not to like him! 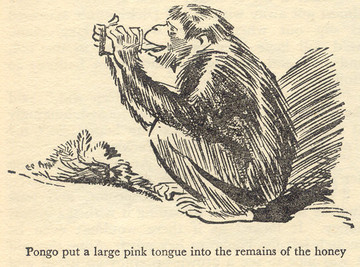 2. Kiki from the Adventure series

Who could not like this cheeky, brave, talking parrot? She is the light relief in the darkest and hardest situations, some of the best dark situations that Blyton ever wrote. She is the saving grace for the books and one of the cleverest animals in the entire of Blyton’s repertoire. She can mimic sounds and phrases that she’s heard only once or twice, as well as making connections between words that sound the same such as “Fussy Gussy” and “Fusty, musty, dusty.” The endless amusement she brings and even allows Jack to get close to some rare eagles in The Castle of Adventure because the bigger birds regard Kiki as one of their own species but who just looks different. Her jealousy of Philip’s endless pets is quite something as she is always telling them off or trying to attack them or something, she is very disdainful of most of them. So long live Kiki, the parrot everyone wants and loves. You can sing “God Save the Queen” for me anytime!

1. Timmy from the Famous Five

Ah Timmy, who else for this Famous Five fan could have made it to the top of the list? Timmy, the perfect dog, not just for George and the Five, but for every child who has ever read a Famous Five. The dog who knows when his mistress is upset, who knows his commands ever so perfectly, even if he does chase rabbits on George’s island, despite being repeatedly told that he is not to do that. Timmy is the perfect guard dog for the adventures even though on a couple of occasions he gets himself bashed on the head, drugged or restrained, but he is always there when needed. For example the time he leapt up at Rookie when he was threatening the children in Five Get into Trouble, and bit his hand. Not even needing to mention the time in Five Go to Mystery Moor  where he navigated the catacombs in the hill with a hurt head to find his beloved George and bring her help in the form of William and Henry.

Timmy, in my humble opinion, is the greatest, most loyal animal character Blyton ever wrote. The others are good, but none will ever be as great as Timmy. Have a bone on me, old chap.

So there we are, my five favourite Blyton animals. Please do tell me about your favourite animals and why! I would love to know!

Looking for more posts about Blyton’s animal characters? Then try these.

This entry was posted in Characters and tagged Animals, Buster, Button the Fox, Five Go Off in a Caravan, Kiki, Lou and Tiger Dan, Nobby, Pongo, The Adventure Series, The Castle of Adventure, The Five Find-Outers, Timmy. Bookmark the permalink.